A Historic Union Vote Gets Underway at Amazon. Austria: government and social partners discuss directive on remote work. Germany: telework becomes mandatory ‘where possible’ until 15 March 2021. EPRS BRI(2020)642847 EN. How The Tumult of 2020 Will Shape the Future of Ride Sharing. The Work of the Future: Building Better Jobs in an Age of Intelligent Machines. Technology Managing People Report 2020 AW Optimised. The benefits of technology at work should be for everyone, not just employers and big tech companies. The fourth industrial revolution The spread of the use of artificial intelligence across all areas of work, including the management of people, continues apace in what has been dubbed “the fourth industrial revolution”. 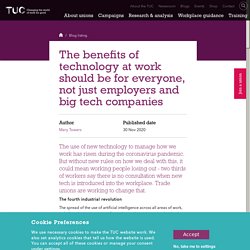 AI is increasingly being used for all manner of people management functions, for example, to recruit, to train, to line manage, to structure teams and even to make selections for redundancy. Coronavirus and remote working Adding to this trend, the advent of mass remote working during the coronavirus crisis has caused employers to rapidly adopt more new technologies and management practices, turbo-boosting the workplace revolution. According to recent research by the LSE’s Centre for Economic Performance, more than 60% of firms have done so since the start of the pandemic, with 90% saying they expect to keep the changes in place. Shtetl-Optimized » Blog Archive » Quantum computing for policymakers and philosopher-novelists. New UK tech regulator to limit power of Google and Facebook. A new tech regulator will work to limit the power of Google, Facebook and other tech platforms, the government has announced, in an effort to ensure a level playing field for smaller competitors and a fair market for consumers. 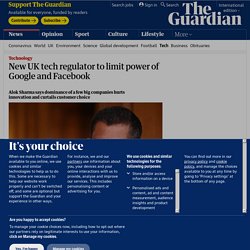 Under the plans, the Competition and Markets Authority (CMA) will gain a dedicated Digital Markets Unit, empowered to write and enforce a new code of practice on technology companies which will set out the limits of acceptable behaviour. The code will only affect those companies deemed to have “strategic market status”, though it has not yet been decided what that means, nor what restrictions will be imposed. The business secretary, Alok Sharma, said: “Digital platforms like Google and Facebook make a significant contribution to our economy and play a massive role in our day-to-day lives – whether it’s helping us stay in touch with our loved ones, share creative content or access the latest news. Andrea Coscelli, the chief executive of the CMA, welcomed the move. New UK tech regulator to limit power of Google and Facebook.

The US Government Will Pay Doctors to Use These AI Algorithms. Japan: Yahoo adopts a new way of working - Planet Labor. Skills development in Physical AI could give birth to lifelike intelligent robots. The research suggests that teaching materials science, mechanical engineering, computer science, biology and chemistry as a combined discipline could help students develop the skills they need to create lifelike artificially intelligent (AI) robots as researchers. 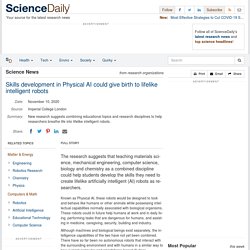 Known as Physical AI, these robots would be designed to look and behave like humans or other animals while possessing intellectual capabilities normally associated with biological organisms. These robots could in future help humans at work and in daily living, performing tasks that are dangerous for humans, and assisting in medicine, caregiving, security, building and industry. Although machines and biological beings exist separately, the intelligence capabilities of the two have not yet been combined. New test reveals AI still lacks common sense. Natural language processing (NLP) has taken great strides recently -- but how much does AI understand of what it reads? 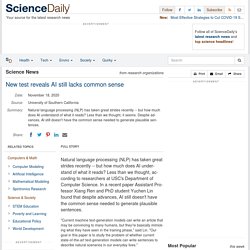 Less than we thought, according to researchers at USC's Department of Computer Science. In a recent paper Assistant Professor Xiang Ren and PhD student Yuchen Lin found that despite advances, AI still doesn't have the common sense needed to generate plausible sentences. "Current machine text-generation models can write an article that may be convincing to many humans, but they're basically mimicking what they have seen in the training phase," said Lin. "Our goal in this paper is to study the problem of whether current state-of-the-art text-generation models can write sentences to describe natural scenarios in our everyday lives. " Telegram Still Hasn’t Removed an AI Bot That’s Abusing Women. Messaging app Telegram is under pressure to crack down on an AI bot that generated tens of thousands of non-consensual images of women on its platform. 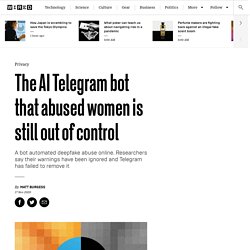 When AI Sees a Man, It Thinks 'Official.' A Woman? 'Smile' Congress Is Eyeing Face Recognition, and Companies Want a Say. Covid-19 News: Live Updates. When infections began rising sharply in the U.S. in September, the growth was driven largely by outbreaks in the Upper Midwest. 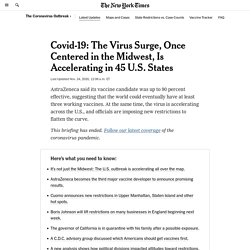 States like North Dakota and Wisconsin soon became the hardest hit in the nation, relative to their size, and the region continues to struggle. Now, though, with the whole country’s daily average of new cases is as high as it has ever been — over 171,000 — the most rapid growth is happening elsewhere. Nine states are reporting more than twice as many new cases a day as they did two weeks ago, and none of them are in the Midwest. The surges in those states — Arizona, California, Delaware, Louisiana, Maryland, New Hampshire, New Mexico, Pennsylvania and Vermont — reflect a still-escalating national crisis. Panel for the Future of Science and Technology (STOA) 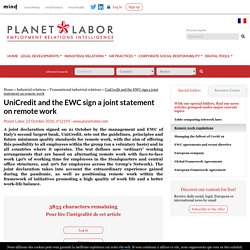 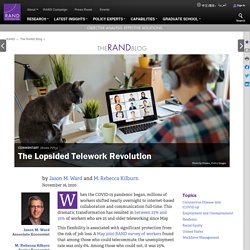 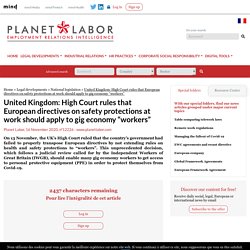 Artificial Intelligence and Robotics and Their Impact on the Workplace - APPG. Proposition 22 Arguments and Rebuttals. Sacramento politicians recently passed legislation that threatens to eliminate the ability of Californians to choose work as independent contractors providing app-based rideshare, food and grocery delivery services. 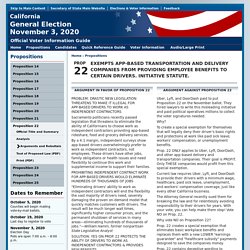 By a 4:1 margin, independent surveys show app-based drivers overwhelmingly prefer to work as independent contractors, not employees. These drivers have other jobs, family obligations or health issues and need flexibility to continue this work and supplemental income to support their families. "Eliminating drivers' ability to work as independent contractors will end the flexibility the vast majority of drivers need, severely damaging the proven on-demand model that quickly matches customers with drivers.

Sandboxes and the role of policy experimentation. Digital technologies and data have brought incredible convenience and spurred many innovations, but they also pose great challenges for regulators. Digitally enabled and innovative products and business models often differ significantly to those in traditional markets, and in some cases, they do not fit well with existing regulatory frameworks (OECD 2019). For example, digital business models that operate across traditional sectoral boundaries, or those that transform the roles of users (e.g. ‘prosumer’ models), may not easily fit into existing regulatory frameworks. Where digitally innovative firms face regulatory uncertainty or an absence of regulation, they may be less likely to set up and attract the funding and resources needed to scale up (Pelkmans and Renda 2014, Armstrong et al. 2019). How Future Workspaces Will Improve Productivity and Creativity.

Cybersecurity for a Remote Workforce. Like what you're reading? Join our community Member Free 5 Free Articles per month, $6.95/article thereafter. Contextualizing the Office: How and Where Work Gets Done. Unpaid Work, Animated – Care Talk. EPRS BRI(2020)642847 EN. Impact of COVID-19 increases urgency of digital technology investments for oil and gas; workforce skills gaps hinder ROI. Amazon faces a more costly workers’ comp classification in Washington state. Just last month, a stunning report showed how Amazon fulfillment centers across the country saw rising injury rates between 2016 and 2019, sourced from internal company data. Opaque Poll that Negatively Frames AI Will Scare Europeans and Harm Progress. BEUC, the self-proclaimed “consumer voice in Europe,” recently released a report arguing that its survey shows consumers do not trust AI and think it will be used to manipulate them. France: legal adoption of a first set of obligations on platforms employing drivers and riders - Planet Labor.

COVID-19 and Remote Work: An Early Look at US Data. Productivity gains from teleworking in the post COVID-19 era: How can public policies make it happen? Differences across countries, industries, occupations and firms in the use of occasional telework before the crisis can be informative about the scope for more widespread use of telework during normal times, as well as about factors that need to be in place to use telework efficiently or that may prevent its use.

Supercomputers promise to tackle pressing global issues. Supercomputing could solve the world’s problems, and create many more. Goal 12: Responsible Consumption and Production. Goal 9: Industry, Innovation and Infrastructure. Human Brain Project Home. The Future of Neurotechnologies and Brain Science. Brain research has become a policy focus for China. How our scientists are making Alexa smarter. Building a Wearable That Can Catch You When You Stumble. Why Robots and AI May Not Herald a Job Apocalypse. Predicting people's driving personalities. A human-machine collaboration to defend against cyberattacks. Deploying more conversational chatbots. Reducing the carbon footprint of artificial intelligence. Massachusetts Institute of Technology. Robots help some firms, even while workers across industries struggle.