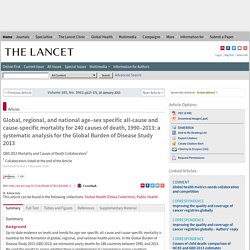 BTL=basic tabulation list. MI ratio=mortality:incidence ratio. CODEm=Cause of Death Ensemble model. Figure 2 Site-years for all causes of death data by country, 1980–2013 ATG=Antigua and Barbuda. Figure 3 Total garbage and non-garbage coded deaths from vital registration and verbal autopsy sources, 1990–2013 Figure 4 Change in global life expectancy at birth for males and females Figure 5 Global deaths by age and super region in 1990 and 2013 Figure 6 Change in age-specific population-weighted Gini coefficient versus relative change in mortality rate from 1990 to 2013 Solid points show age groups for which the mean absolute difference between countries has increased and hollow points show those for which mean absolute difference has decreased. 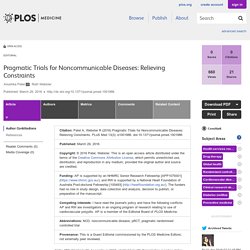 PLoS Med 13(3): e1001986. doi:10.1371/journal.pmed.1001986 Published: March 29, 2016 Copyright: © 2016 Patel, Webster. This is an open access article distributed under the terms of the Creative Commons Attribution License, which permits unrestricted use, distribution, and reproduction in any medium, provided the original author and source are credited. Funding: AP is supported by an NHMRC Senior Research Fellowship [APP1079301] ( and RW is supported by a National Heart Foundation of Australia Post-doctoral Fellowship [100493] ( The funders had no role in study design, data collection and analysis, decision to publish, or preparation of the manuscript. Competing interests: I have read the journal's policy and have the following conflicts: AP and RW are investigators in an ongoing program of research relating to use of cardiovascular polypills.

Author Contributions References. Soaring suicide and murder rates compound Middle East suffering. Violent acts including suicide, homicide and sexual assaults are increasing faster in the eastern Mediterranean region than in any other in the world, adding to the suffering of populations experiencing conflict and war. 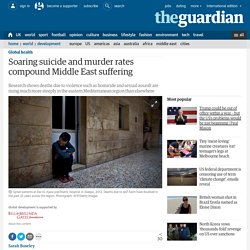 According to a huge body of work from the Institute for Health Metrics and Evaluation at the University of Washington in Seattle, deaths due to self-harm increased by 100% to 30,000 in the past 25 years in the region, and those from interpersonal violence were up 152% to 35,000. In other parts of the world during the same period, the number of deaths from suicide increased 19% and interpersonal violence by 12%. “Intractable and endemic violence is creating a lost generation of children and young adults,” said Dr Ali Mokdad, lead author of the study (pdf) and director for Middle Eastern Initiatives at the IHME.

“The future of the Middle East is grim unless we can find a way to bring stability to the region.” Progress on child survival remains uneven, the study says. Changes in health in the countries of the UK and 150 English Local Authority areas 1990–2016: a systematic analysis for the Global Burden of Disease Study 2016 - The Lancet. #Climate and #health share the same root causes. City leaders need to think FOOD, ENERGY, TRANSPORT and HEALTHCARE solutions together. Positive change starts in cities! #UrbanDiabetes □ □ #TheFutureWeWant @c40cities @novonordisk. Noncommunicable diseases: the slow motion disaster. Of all the major health threats to emerge, none has challenged the very foundations of public health so profoundly as the rise of chronic noncommunicable diseases. 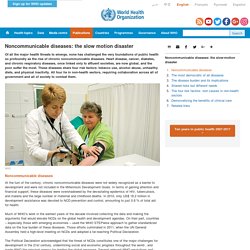 Heart disease, cancer, diabetes, and chronic respiratory diseases, once linked only to affluent societies, are now global, and the poor suffer the most. These diseases share four risk factors: tobacco use, alcohol abuse, unhealthy diets, and physical inactivity. All four lie in non-health sectors, requiring collaboration across all of government and all of society to combat them. Noncommunicable diseases. WHO web page: Noncommunicable diseases and mental health. What's likely to kill you? Comprehensive health study in India finds rise of non-communicable diseases.

Analysis of the major diseases and risk factors influencing health at the state level DELHI – A new state-by-state health analysis in India finds that over two decades heart- and lung-related conditions, as well as other non-communicable diseases (NCDs), have surpassed infectious diseases, such as diarrhea and tuberculosis, as the nation’s leading killers. 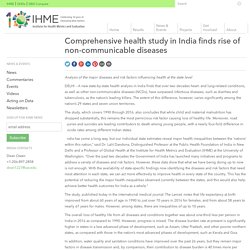 The extent of this difference, however, varies significantly among the nation’s 29 states and seven union territories. The study, which covers 1990 through 2016, also concludes that while child and maternal malnutrition has dropped substantially, this remains the most pernicious risk factor causing loss of healthy life. Moreover, road injuries and suicides are leading contributors to death among young people, with a nearly four-fold difference in suicide rates among different Indian states. “India has come a long way, but our individual state estimates reveal major health inequalities between the ‘nations’ within this nation,” said Dr.