The newest addition to our geovisualisation series by Dr Kingsley Purdam from @OfficialUoM links life expectancy estimates with some of the most famous places and landmarks in the UK. Find out more. Changes in LE. The next few years will be highly unusual as the impact of the pandemic works through the data. Exceptionally high death rates in 2020 (and 2021?) will visibility distort life expectancy in the years ahead, as similar pandemics have done. 6/7. William Easterly sur Twitter : "Anne Case and Angus Deaton show how much the US outspends other countries on health care, and how little health there is to show for it. From their forthcoming book Deaths of Despair from @PrincetonUPress…

The average life expectancy in the US has declined for a third straight year.New research linked that decline to the fact that "working-age" Americans, between ages 25 and 64, have been dying at higher rates.These deaths have been linked to drug overdoses, suicides, and alcohol-related diseases, among other health problems.Multiple experts agree that socioeconomic inequality and a economic hardship may have contributed to this increase in middle-age American deaths.Visit Business Insider's homepage for more stories. 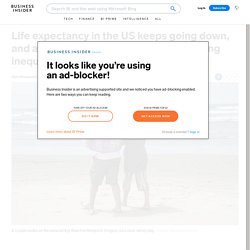 The US is the only wealthy country in the world where the life expectancy needle is moving the wrong way. Between 1959 and 2014, the average length of time that Americans were expected to live was on the rise. Now, for the third year in a row, it's declining, according to a new study published in the Journal of the American Medical Association. This decline can't be linked to just one ethnicity, gender, or geographic area, either: It originates among an entire age group. Animated: life expectancy across Europe since the 1880s. We live longer than ever before. This gives us more time to imagine things were better in the past…

Twitter. This is really interesting. It looks like the mortality rate trend we have seen in the UK, with long-term improvements flattening or going into reverse, is happening in some US states as well. The bad news is we’re dying early in Britain – and it’s all down to ‘shit-life syndrome’ Britain and America are in the midst of a barely reported public health crisis. 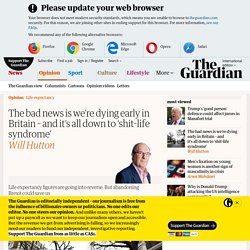 They are experiencing not merely a slowdown in life expectancy, which in many other rich countries is continuing to lengthen, but the start of an alarming increase in death rates across all our populations, men and women alike. We are needlessly allowing our people to die early. In Britain, life expectancy, which increased steadily for a century, slowed dramatically between 2010 and 2016. The rate of increase dropped by 90% for women and 76% for men, to 82.8 years and 79.1 years respectively. Now, death rates among older people have so much increased over the last two years – with expectations that this will continue – that two major insurance companies, Aviva and Legal and General, are releasing hundreds of millions of pounds they had been holding as reserves to pay annuities to pay to shareholders instead. UK's falling life expectancy is like post-Society crisis, Chris Smyth in the Times, August 16th 2018:…

Finally some good news… Twitter. Adam Tooze sur Twitter : "Tennessee has the same life expectancy as West Bank and Gaza - territories under siege. Mississippi has the same life expectancy as Libya after Gaddafi’s dictatorship and civil war! @SoberLook @ianbremmer… What a chart… Disability Adjusted Life Years per 100,000 (all causes), 2012 - Our World In Data. Chart shows the age of the oldest verified living person from 1960 to 2018. Source. LE and mortality in the UK.

Chart shows life expectancy in England and Wales throughout #history (1700-today). Nice way of visualizing life expectancy by age. Source. This is how deadly a lack of #education really is #health… #Map shows prevalence of #tobacco #smoking across #Europe. Who can recognize a pattern? Source. Simon Kuestenmacher sur Twitter : "#Infographic from 1936 reminds us how much the role of #Education has changed in the last eight decades. Education is crucially important today for economic success in a knowledge economy. Source.

"Life expectancy of poorest girls in England falls for first time on record since 1920s" Department of Health and Social Care respond: "#Map: share of US population without health insurance. These people are one medical emergency away from financial ruin or death. This topic must not be politicized! A data driven approach towards financially optimized he. You can reverse decades of inactivity and protect your heart, finds new research #health… Life expectancy at birth in Europe (2015) You don’t have to get old in ex-USSR. Wales LE: "Nearly nine years. That’s how much sooner you’re likely to die if you’re a man in a poor area of Wales compared with a man in a well-off area. For women it’s nearly seven years. Is this a class divide in health? We'll be debating c.

#Map compares expected life expectancy (based in GDP) with actual life expectancy. Can be used to point out countries that are doing surpris… Americans are dying younger than people in other rich nations #US. These 5 conditions are often over-diagnosed, experts argue #health. *****Life expectancy differences in USA: A 'survival gap' *****USA life expectancy v health expenditure: This one chart shows how far behind the US lags in healthcare. Is the money we're spending on health care keeping us alive? 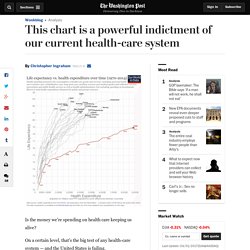 On a certain level, that's the big test of any health-care system — and the United States is failing. According to above chart, U.S. life expectancy continues to lag far behind other developed countries, despite spending way more on medical treatments aimed at keeping us alive. The chart, courtesy of Oxford economist Max Roser, plots per-capita health-care spending against life expectancy for the world's wealthiest countries over the past 40-plus years. Each country gets one line, which plots its trajectory on those measures over time. Looking at the chart, two things become clear: As Roser notes, the big takeaway is that, in wealthy countries, more spending on health leads to a longer life expectancy. But there's a secondary finding: Not all health-care spending is created equal. That's $2,000 more per person per year than the second highest-spending country on the chart, Switzerland.

Wonkbook newsletter Thanks! *****USA life expectancy v health expenditure: This one chart shows how far behind the #US lags in healthcare #health.