More than a third of UK workers 'risk health in low-quality jobs' Theconversation. The Australian government announced in yesterday’s budget $46 million towards the community visitors scheme which is designed to reduce loneliness in older adults. 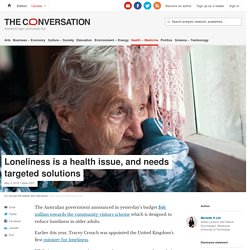 Earlier this year, Tracey Crouch was appointed the United Kingdom’s first minister for loneliness. While it may seem unusual to some to have government take a role in improving our social connections, it makes sense when you consider the negative impact of loneliness not only on the individual, but also the wider community. But with increasing investment from government, how do we ensure programs intended to address loneliness are well-targeted and successful? Read more: The deadly truth about loneliness What is loneliness? Loneliness is a negative feeling that arises when someone’s social needs are unmet by their current social relationships. A person who perceives themselves as having less access to relationships, also finds physical and mental tasks more difficult. 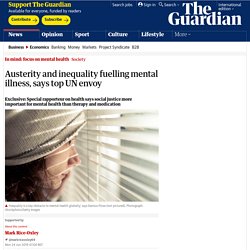 In an exclusive interview with the Guardian to coincide with a hard-hitting report to be delivered to the UN in Geneva on Monday, Dr Dainius Pūras said measures to address inequality and discrimination would be far more effective in combatting mental illness than the emphasis over the past 30 years on medication and therapy. “This would be the best ‘vaccine’ against mental illness and would be much better than the excessive use of psychotropic medication which is happening,” said Pūras, who as the UN’s special rapporteur on health reports back to the UN human rights council in Geneva.

He said that since the 2008 financial crisis, policies that accentuated division, inequality and social isolation have been bad for mental equilibrium. Researchers discover why being overweight can lead to depression. Being overweight can cause depression, researchers say, with the effects thought to be largely psychological. 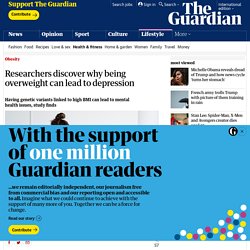 While previous studies have found that people who are obese are more likely to have depression, it has been unclear whether that is down to depression driving weight changes or the reverse. Now, in the largest study of its kind, experts say having genetic variants linked to a high body mass index (BMI) can lead to depression, with a stronger effect in women than men. What’s more, they say the research suggests the effect could be down to factors such as body image.

Theconversation. The case against Nicole Lee, Associate Professor at the National Drug Research Institute, Curtin University We used to think of “addiction”, or what we now call dependence, as a moral failing. 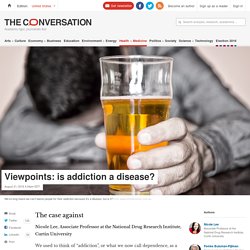 This had the result of blaming the person who was addicted – it was a matter of willpower and they just weren’t trying hard enough. So the obvious solution was shaming and scolding until they did. In the mid-20th century, a new movement started: the recovery movement, led by peer organisations such as Alcoholics Anonymous. Theconversation. About one in 14 people around the world are affected by anxiety disorders at any given time. 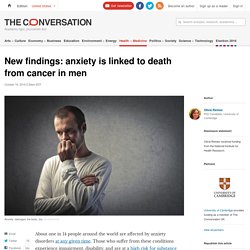 Those who suffer from these conditions experience impairment, disability, and are at a high risk for substance abuse and suicide. In spite of these considerable risks, research on anxiety is lagging far behind that of other common mental health problems – and many people affected don’t even know they have this condition. In many cases, a decade or more can elapse before someone who develops anxiety goes to the doctor for treatment. However, waiting this long can have potentially serious consequences. New research suggests that generalised anxiety disorder is associated with a two times higher risk for cancer deaths – but only in men. How can this be? WHO web page: Noncommunicable diseases and mental health. As Liberia and Sierra Leone recover from civil wars and Ebola, demand for mental health services surges. Drug, human resource shortages keep countries from responding to most vulnerable Marie receives regular medication to control schizophrenia. 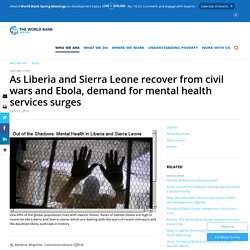 Many patients do not have the same experience. Psychotropic drug shortages plague Sierra Leone and Liberia. Mental illness: is there really a global epidemic? What is mental illness? 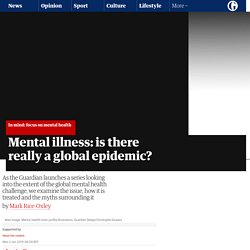 There are dozens of different kinds of mental illness, from common disorders that affect tens of millions of people such as depression and anxiety, to rarer afflictions like paraphilia (sexual compulsion) and trichotillomania (a compulsion to remove hair). The “bible” of mental illness, the Diagnostic and Statistical Manual of Mental Disorders (its fifth iteration, DSM-5, was published in 2013), groups them under about 20 subheadings* (see below). Busting the myth that depression doesn't affect people in poor countries. When Vikram Patel first began to study mental health, he believed depression only existed in rich nations. But today, he is the single most influential figure in the growing global movement to treat mental illness in poor countries, especially the most common disorder, depression. In 1993, Patel, who was born in Mumbai, finished his training as a psychiatrist in London and moved with his wife to Harare, the capital of Zimbabwe, to begin a two-year research fellowship at the national university.

His purpose was to find evidence for the view, then widespread among psychiatrists, that what looked like depression in poor countries was actually a response to deprivation and injustice – conditions stemming from colonisation. The remedy in such cases, he believed, was not psychotherapy, but social justice. WHO fact sheet: Mental disorders. Depression affects the body as well as the mind, study finds.

Depression is a condition which affects the body as well as the mind, a new study has suggested. 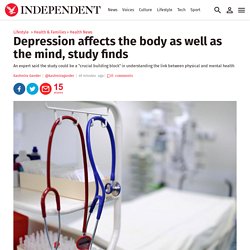 An international team of researchers has found that the illness causes an imbalance in how the body attacks harmful molecules. The disorder causes a change of the oxidative stress, which is an imbalance in the production of free radicals and the body’s ability to neutralise them with antioxidants. Depression should therefore be treated as a disease which impacts a person’s physical and mental health, the study found. World in mental health crisis of 'monumental suffering', say experts. Every country in the world is facing and failing to tackle a mental health crisis, from epidemics of anxiety and depression to conditions caused by violence and trauma, according to a review by experts that estimates the rising cost will hit $16tn £12tn by 2030. 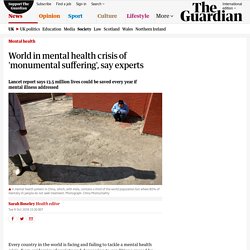 A team of 28 global experts assembled by the Lancet medical journal says there is a “collective failure to respond to this global health crisis” which “results in monumental loss of human capabilities and avoidable suffering.” The burden of mental ill-health is rising everywhere, says the Lancet Commission, in spite of advances in the understanding of the causes and options for treatment. Theconversation. The world is getting fatter and it’s making us sicker. 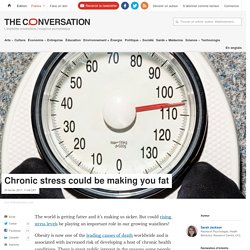 But could rising stress levels be playing an important role in our growing waistlines? Obesity is now one of the leading causes of death worldwide and is associated with increased risk of developing a host of chronic health conditions. There is great public interest in the reasons some people struggle with their weight while others find it easy to stay slim, with blame often attributed to genes or health conditions, such as thyroid problems. Stress is another potential risk factor that has attracted research attention.