TikTok slammed for being too addictive in app's first 'I quit' essay. Perhaps you’ve just barely wrapped your head around the existence and popularity of TikTok – something about dances? 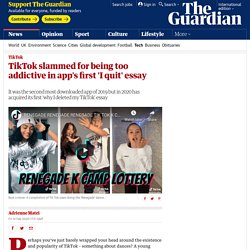 A young woman called Charli D’Amelio? Does the word “renegade” have something to do with it? Sigh. While you’re sorting that out, at least one young user is already over 2019’s second-most downloaded app. Last Sunday, Cornell University sophomore Niko Nguyen published an essay in the Cornell Daily Sun student paper detailing his personal decision to quit TikTok. Young people who seek support online being accused of 'sadfishing' Vulnerable young people who go online to seek support can find themselves being bullied and accused of “sadfishing”, a report has said. 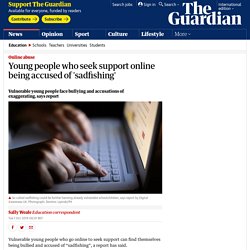 While many find comfort by sharing their experiences, some young people are being targeted and accused of exaggerating their problems in order to gain attention – a social media phenomenon that has been given the mocking name of sadfishing. Facebook to hide number of likes in trial aimed at improving users' wellbeing. Some Facebook users will soon no longer see the number of likes, reactions and video views on other’s posts in a world-first trial aimed at boosting users’ wellbeing. 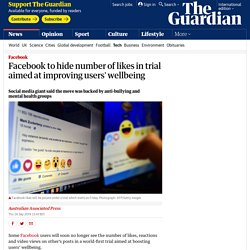 Instead, likes will be private and only visible to the post’s author in a change that follows a similar test on Instagram which started in July in Australia. The new Facebook trial, which begins on Friday, will also kick off in Australia. Time. Children's social media use has ‘trivial’ effect on happiness – study. Time spent on social media has only a “trivial” impact on life satisfaction among adolescents, say researchers. 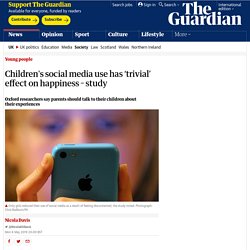 The team behind a new study say time spent on social media has only a small negative effect on how happy boys and girls feel about life, and that only girls reduced their use of social media as a result of feeling discontented. While the team found the effects of time spent on social media do appear to be wider-ranging for girls than boys, they said even then the effects remain tiny. According to Prof Andy Przybylski, coauthor of the research from Oxford University, “99.75% of a young person’s life satisfaction across a year has nothing to do with whether they are using more or less social media”. Under-18s face 'like' and 'streaks' limits on social media.

Image copyright Getty Images Facebook and Instagram face a ban on letting under-18s "like" posts on their platforms while Snapchat could be prevented from allowing the age group to build up "streaks", under new rules proposed by the UK's data watchdog. 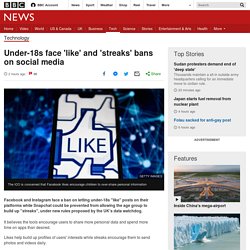 It believes the tools encourage users to share more personal data and spend more time on apps than desired. Likes help build up profiles of users' interests while streaks encourage them to send photos and videos daily. The proposal is part of a 16-rule code. To ensure its success, the Information Commissioner's Office (ICO) says that online services must also adopt "robust" age-verification systems. Location tracking In addition to calling for an end to children being exposed to so-called "nudge techniques", the ICO advocates internet firms make the following changes among others for their younger members: "The internet and all its wonders are hardwired into their everyday lives," commented Information Commissioner Elizabeth Denham. Worry less about children's screen use, parents told. Image copyright Getty Images There is little evidence screen use for children is harmful in itself, guidance from leading paediatricians says. 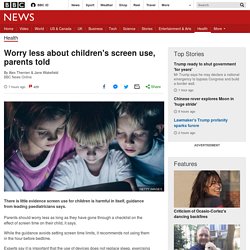 Parents should worry less as long as they have gone through a checklist on the effect of screen time on their child, it says. While the guidance avoids setting screen time limits, it recommends not using them in the hour before bedtime. Experts say it is important that the use of devices does not replace sleep, exercising and time with family. Depression in girls linked to higher use of social media. Girls’ much-higher rate of depression than boys is closely linked to the greater time they spend on social media, and online bullying and poor sleep are the main culprits for their low mood, new research reveals. 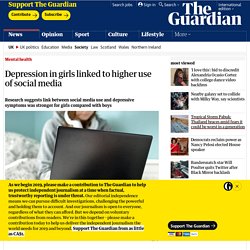 As many as three-quarters of 14-year-old girls who suffer from depression also have low self-esteem, are unhappy with how they look and sleep for seven hours or less each night, the study found. “Girls, it seems, are struggling with these aspects of their lives more than boys, in some cases considerably so,” said Prof Yvonne Kelly, from University College London, who led the team behind the findings. The results prompted renewed concern about the rapidly accumulating evidence that many more girls and young women exhibit a range of mental health problems than boys and young men, and about the damage these can cause, including self-harm and suicidal thoughts. Instagram is supposed to be friendly. So why is it making people so miserable? When 24-year-old fashion blogger Scarlett Dixon posted a picture of herself having breakfast, the internet turned nasty. 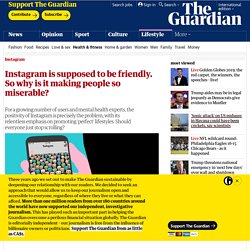 “The best of days start with a smile and positive thoughts. And pancakes. And strawberries. Antisocial media: why I decided to cut back on Facebook and Instagram. It was winter 2016 when I reached rock bottom. 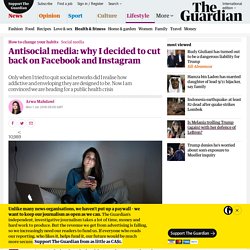 I went on a three-day Facebook binge. I can’t remember what set it off, but I remember how it ended. I woke up in a gutter, heart pounding, thinking I was going to die. I knew then that I needed help. I needed to stop. None of that is true, of course, because it doesn’t work like that. Is social media causing childhood depression? The social media generation.. sad but true. Life is now commonly one of social connection. CEOP. The Parent Trap: 5 Family Friendly Rules For Using Technology At Home.

Confession: I am not a parent. 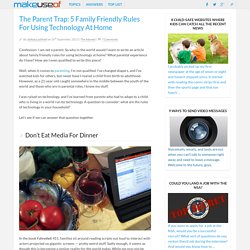 So why in the world would I want to write an article about family friendly rules for using technology at home? What parental experience do I have? How am I even qualified to write this piece? Well, when it comes to parenting, I’m not qualified. I’ve changed diapers, and I’ve watched kids for others, but never have I reared a child from birth to adulthood. I was raised on technology, and I’ve learned from parents who had to adapt to a child who is living in a world run by technology. Let’s see if we can answer that question together.

Don’t Eat Media For Dinner In the book Fahrenheit 451, families sit around reading scripts out loud to interact with actors projected on gigantic screens — pretty weird stuff. Televisions, tablets, smartphones, laptops — they are constantly on our person. Simply put, don’t let this basic aspect of humanity fade away. Video Chats Aren’t Just Another Video Skype, Oovoo, Facetime – all familiar names in most households these days. Can I be your friend? Facebook use 'makes people feel worse about themselves' 15 August 2013Last updated at 09:11 ET The study found people spent more time on Facebook when they were feeling lonely Using Facebook can reduce young adults' sense of well-being and satisfaction with life, a study has found. Checking Facebook made people feel worse about both issues, and the more they browsed, the worse they felt, the University of Michigan research said.

The study, which tracked participants for two weeks, adds to a growing body of research saying Facebook can have negative psychological consequences. Sexting: what you should know. Sexting scare: 6 sexting myths busted. It seems incredible that teens, even 17-year-olds who can legally have sex, could end up on a register for sexting. Of course, it’s important that young people understand the serious implications sexting could have, but criminalising the craze seems like a step too far. Instead of frightening teens into ditching their naked selfies, wouldn't it be better to educate them? But with sex education lessons still in need of a 21st century revamp, it looks like that’s not going to happen anytime soon. So, we’ve done it for you – compiling the legal, very real, consequences of sending that sext. Sarah Bazaraa, a solicitor at Pannone Corporate, talks me through the civil legal issues that being involved in sexting could lead to.

Essena O'Neill quits Instagram claiming social media 'is not real life' An Australian teenager with more than half a million followers on Instagram has quit the platform, describing it as “contrived perfection made to get attention”, and called for others to quit social media – perhaps with help from her new website. Essena O’Neill, 18, said she was able to make an income from marketing products to her 612,000 followers on Instagram – “$2000AUD a post EASY”. But her dramatic rejection of social media celebrity has won her praise. On 27 October she deleted more than 2,000 pictures “that served no real purpose other than self-promotion”, and dramatically edited the captions to the remaining 96 posts in a bid to to reveal the manipulation, mundanity, and even insecurity behind them.

O’Neill did not respond to requests for an interview. A photo of her wearing a bikini, once captioned “Things are getting pretty wild at my house. Digital Parenting. More than a quarter of children who spend longer on social networking websites report mental ill-health symptoms. Children who spent more than three hours using social networking websites on a school day were twice as likely to report high or very high scores for mental ill-health. The Children’s Well-being 2015 publication, which for the first time includes an analysis of data on children’s mental ill-health, revealed that of those who were online for more than three hours, 27% reported high or very high scores for mental ill-health. This is more than double those spending no time on them (12%) or those spending up to three hours on social media (11%).

Total difficulty score type by time spent using social media on a school day, UK, 2011 to 2012 Download the data The Insights into Children’s Mental Health and Wellbeing report is part of of ONS’s work on the well-being of children. It looks at data from the Strengths and Difficulties questionnaire, designed by Prof Robert Goodman, which screens the behaviour of children aged two to 17.