South australias hydrogen action plan. Hydrogen cars could be green vehicle of choice over battery electric cars by 2025. Updated 30 Aug 2019, 1:37amFri 30 Aug 2019, 1:37am Similar to the VHS versus Beta debate in the 80s, the battle between different types of green motoring could see hydrogen-fuelled cars come out on top over conventional battery-powered electric vehicles in the next five years. 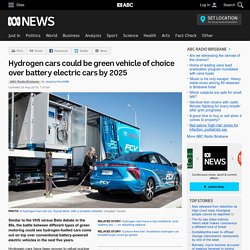 Key points Hydrogen fuelled cars could be on the road commercially by 2025Hydrogen cars are quicker to recharge than conventional electric carsCar companies and state governments are investing millions of dollars into the future of hydrogen-powered cars Hydrogen cars have been proven to refuel quicker and have a longer driving range — which some say makes them the future of green motoring. "The advantage of hydrogen cars is that it takes the same time to charge them as it takes to fill your car with fossil fuels — no more than about three minutes," Motor Trades Association of Queensland's chief executive Brett Dale said. "Although we use the language recharge, with hydrogen it's more like refuelling. " Renewable hydrogen could fuel Australia's next export boom after CSIRO breakthrough. Updated 12 May 2017, 5:00amFri 12 May 2017, 5:00am Australia's next big export industry could be its sunlight and wind, as game-changing technology makes it easier to transport and deliver their energy as hydrogen. 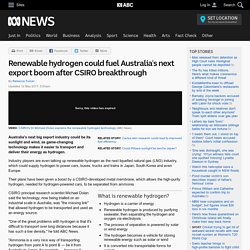 Industry players are even talking up renewable hydrogen as the next liquefied natural gas (LNG) industry, which could supply hydrogen to power cars, buses, trucks and trains in Japan, South Korea and even Europe. Their plans have been given a boost by a CSIRO-developed metal membrane, which allows the high-purity hydrogen, needed for hydrogen-powered cars, to be separated from ammonia. What is renewable hydrogen?

Hydrogen is a carrier of energyRenewable hydrogen is produced by purifying seawater, then separating the hydrogen and oxygen via electrolysis The process of separation is powered by solar or wind energyThe hydrogen becomes a vehicle for storing renewable energy such as solar or windIt is converted into transportable forms for export. Hydrogen cars: what are they and when will we drive them? Posted 14 Sep 2017, 9:44amThu 14 Sep 2017, 9:44am Tipped as the future of green motoring, hydrogen cars are virtually emissions-free and both simple and fast to refuel. 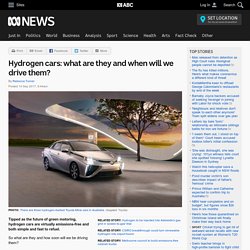 So what are they and how soon will we be driving them? How do hydrogen cars work? As their name suggests, they use hydrogen as a fuel to power the car. Colourless, odourless hydrogen gas passes through a fuel stack, where it interacts with oxygen. Like electric cars, hydrogen cars using hybrid technology are quiet to drive. For example, the tank of Toyota's Mirai holds 5 kilograms of compressed hydrogen. It's worth pointing out that hydrogen fuel cell technology is not new — NASA used them to power rockets for decades — but car manufacturers are now able to make fuel cells small and mobile enough to fit inside passenger cars. How green are they? They have the potential to be one of the cleanest cars on the road. 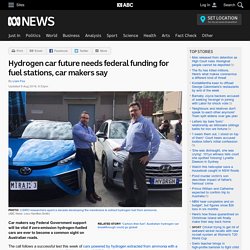 The call follows a successful test this week of cars powered by hydrogen extracted from ammonia with a new metal membrane developed in Brisbane by the CSIRO. Researchers said the breakthrough would allow hydrogen to be safely transported in large quantities for use as a source of energy — a boon to the growth of hydrogen-powered electric cars in Japan, South Korea and Singapore. But car manufacturers have told the ABC one of the main barriers to the uptake of hydrogen cars is the current absence of refuelling stations. "The main struggle is infrastructure," Toyota spokesman Matthew Macleod said. He said the Federal Government needed to follow the lead of governments in Japan and South Korea by stepping in to support the construction of hydrogen fuelling stations.

Electric or hydrogen — which will win the clean car race? - Science News - ABC News. Clean transport is a hot topic, and as we move towards a low-emissions economy and international manufacturers phase out conventional vehicles, both electric and hydrogen are vying for a place. 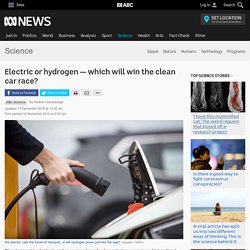 Hydrogen electric car key points Key points: Electric vehicles are coming down in price but local availability needs to improveA national refuelling network is required to make hydrogen vehicles a viable optionA mix of technologies will help Australia make the transition to clean vehicles And with good reason. At the moment, transport contributes almost a fifth of Australia's greenhouse gas emissions — with passenger cars and road freight together emitting more than three-quarters of the transport sector's share.

Overall transport emissions have grown 1.3 per cent since last year, as motorists switch from petrol to diesel vehicles and freight activity rises. But the need to reduce emissions isn't the only driver for a transition to cleaner transport. Where are we now? ABC News: Brendan Esposito. Hydrogen fuel breakthrough in Queensland could fire up massive new export market. Updated 8 Aug 2018, 5:55amWed 8 Aug 2018, 5:55am. 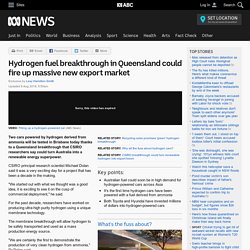