The Remarkable Fall in China’s Suicide Rate. A dramatic decline in suicides - Back from the edge. IN THE 1990s China had one of the highest suicide rates in the world. 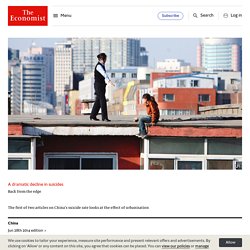 Young rural women in particular were killing themselves at an alarming rate. In recent years, however, China’s suicides have declined to among the lowest rates in the world. In 2002 the Lancet, a British medical journal, said there were 23.2 suicides per 100,000 people annually from 1995 to 1999. This year a report by a group of researchers from the University of Hong Kong found that had declined to an average annual rate of 9.8 per 100,000 for the years 2009-11, a 58% drop. Continue reading for free Join to get 5 free articles per month Join for free. Preparing for China's urban billion. The scale and pace of China's urbanization continues at an unprecedented rate. 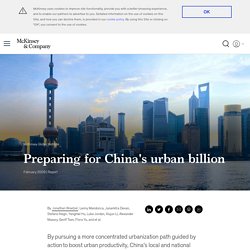 If current trends hold, China's urban population will hit the one billion mark by 2030. In 20 years, China's cities will have added 350 million people more than the entire population of the United States today. By 2025, China will have 221 cities with one million–plus inhabitants—compared with 35 cities of this size in Europe today—and 23 cities with more than five million. What’s the Greater Bay Area Plan and Why Does It Matter? – That’s Guangzhou.

The Greater Bay Area plan has finally been put into action after 11 years of planning, according to a timeline of events compiled by the Government of Macau Special Administrative Region. 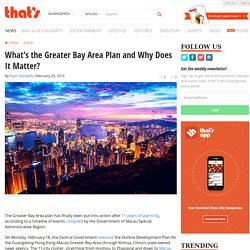 On Monday, February 18, the Central Government released the Outline Development Plan for the Guangdong-Hong Kong-Macao Greater Bay Area through Xinhua, China’s state-owned news agency. The 11-city cluster, stretching from Huizhou to Zhaoqing and down to Macau and Hong Kong, is preparing to ramp up efforts to become a ‘world-class city cluster’ and provide support for the “Belt and Road Initiative.” The Greater Bay Area consists of nine Chinese mainland cities (Guangzhou, Shenzhen, Huizhou, Dongguan, Zhuhai, Zhongshan, Jiangmen, Foshan and Zhaoqing) and two special administrative regions (Macau and Hong Kong). This extended area covers 56,000 square kilometers with a combined population of over 70 million.

Xiongan New Area. Legislator Says ‘Hukou’ System Is Squandering China’s Labor. A prominent legislator is calling for the overhaul of China’s household registration system, arguing that it is squandering the country’s huge population benefits by reducing the ability of migrant laborers to work into their later years. 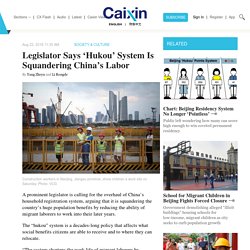 The “hukou” system is a decades-long policy that affects what social benefits citizens are able to receive and to where they can relocate. “The system shortens the work life of migrant laborers by one-third, or 15 years of their work life,” said Huang Qifan, a vice chairman of the Financial and Economic Affairs Committee of China’s top legislature, the National People’s Congress. “That’s because they are less competitive in the job market after 45 and have no access to government job-creation programs available only to those registered as local residents,” he said at the Fourth China Smart City International Expo, held in the southern city of Shenzhen. Most of those laborers leave their families behind due to restrictions linked to the hukou.

China is trying to turn itself into a country of 19 super-regions - A tale of 19 mega-cities. Economist. Subscribe to read. Angel Of Nanjing / Journeyman Pictures (Firm). Photos: Countryside and Concrete Collide in Chinese Megacity Chongqing. 8 of 8 On the side of the Jialing river, under the Yu’ao bridge, the vegetation reaches upward in an apparent attempt to climb from the backfill and overtake the highway structure from below. 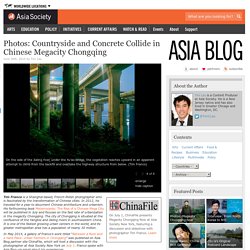 (Tim Franco) On July 1, ChinaFile presents Megacity Chongqing Now at Asia Society New York, featuring a discussion and slideshow with photographer Tim Franco. Learn more Tim Franco is a Shanghai-based, French-Polish photographer who is fascinated by the transformation of Chinese cities. In May 2014, a gallery of Franco's work titled “Between a Rock and a Hard Place: Urban Farmers in Chongqing” was published on Asia Blog partner site ChinaFile, which will host a discussion with the photographer at Asia Society New York on July 1.

Tell us about your journey as a photographer. I studied engineering and management, which had nothing to do with photography, and I moved to China in 2005 because I wanted to discover this part of the world more. Tim Franco. Why China loves to build copycat towns. China is well known for its pirated DVDs and fake iPhones, but this "copycat culture" extends to architecture too - with whole towns sometimes replicated. 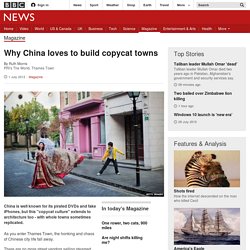 As you enter Thames Town, the honking and chaos of Chinese city life fall away. There are no more street vendors selling steamed pork buns, and no more men hauling recyclables on tricycles. Ordos, China: A Modern Ghost Town. China Molds a Supercity Around Beijing, Promising to Change Lives. 在河北省的这座小城镇，每天早上5点30分，刘德胜（音）就和十几名退休人员一起，等待着开往北京市中心的特快巴士发车。 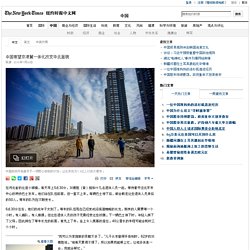 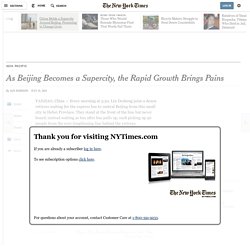 They stand at the front of the line but never board, instead waiting as bus after bus pulls up, each picking up 50 people from the ever-lengthening line behind the retirees. Around 6:30, their adult children arrive. The line, now snaking down the street, has become an hourlong wait. People cut in, and a shoving match breaks out. ‘Our cities are insufferable’: Chinese artists go back to the land. White houses with dark-tiled upturned eaves stand at the foot of a mountain, like shards of pottery emerging from the fields. 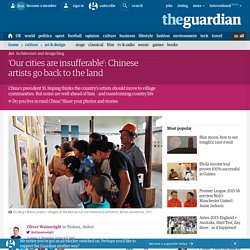 With narrow lanes patrolled by chickens, and open doorways revealing heated games of mahjong, the village of Bishan in China’s rural Anhui province might seem an unlikely place to glimpse an experiment in the future of the countryside. This week Chinese president Xi Jinping declared that artists, film-makers, and TV personalities will be sent to live among the masses in rural areas to “form a correct view of art,” in an edict that echoes Mao Zedong’s policy of “sending down” intellectuals to labour among the peasants. But some artists are one step ahead, driven by an alternative ambition – and they’re already having a transformative effect on village life.

Bishan Commune - Huangshan (ville) - Organisation à but non lucratif. Bishan Project: Restarting the Rural Reconstructio. Down to the Countryside. The world has heard much of late about the scale and scope of China’s mass migration from the poor rural countryside to its booming cities. 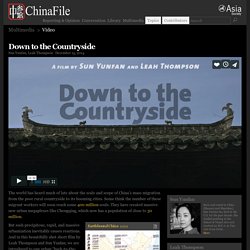 Some think the number of these migrant workers will soon reach some 400 million souls. They have created massive new urban megaplexes like Chongqing, which now has a population of close to 30 million. Leah Thompson In our short film “Down to the Countryside,” Sun Yunfan and I follow Ou Ning, an artist and curator who moved from Beijing to the village of Bishan in rural Anhui province in 2013, where he experiments with preserving and revitalizing local heritage...

But such precipitous, rapid, and massive urbanization inevitably causes reactions.