China’s War on Uighur Culture. How do you protect a culture that is being wiped out? 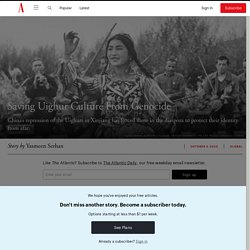 For Uighurs, this is more than just a hypothetical. Repressive measures against the ethnic minority have progressively worsened: The Chinese government has corralled more than 1 million of them into internment camps, where they have been subjected to political indoctrination, forced sterilization, and torture. The targeting of the Uighurs isn’t limited to the camps. Since 2016, dozens of graveyards and religious sites have been destroyed. The Uighur language has been banned in Xinjiang schools in favor of Mandarin Chinese. Beijing frames these moves as its way of rooting out terrorism, separatism, and religious extremism. The repercussions bear heavily even on Uighurs living outside the country. Read: The panopticon is already here In an effort to understand what this kind of cultural preservation looks like in practice, I spoke with seven Uighurs residing in Britain, France, Turkey, and the United States. 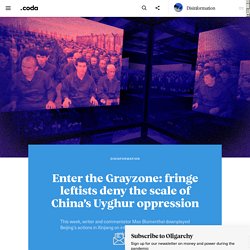 On air, he questioned the scale of the detention of Uyghurs in camps in China’s northwestern Xinjiang province. “I don’t have reason to doubt that there’s something going in Xinjiang, that there could even be repression,” said Blumenthal. “But we haven’t seen the evidence for these massive claims.” He went on to describe reports of Beijing’s abuse of Uyghurs as “the hostile language of a Cold War, weaponizing a minority group.”

Blumenthal’s statements met with outrage online and many social media users accused him of ignoring one of the largest-scale human rights violations of the 21st century. This is not the first time a writer from The Grayzone has sought to refute or downplay reports of Beijing’s actions in Xinjiang, and there is precedent for Blumenthal’s words. Ideological spread. How China’s Government Is Using AI on Its Uighur Muslim Population. A still from the FRONTLINE documentary "In the Age of AI," which in part explored the Chinese government's use of AI technology on the ethnic Uighur minority. 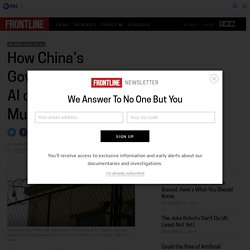 It’s been estimated that China’s government has detained as many as a million members of the country’s Muslim population in so-called “re-education camps,” in part of a campaign that has alarmed human rights activists across the world. This week, drawing on 403 pages of leaked government documents, The New York Times published new details of how the ongoing crackdown took shape under Chinese President Xi Jinping and other leadership in the Communist Party of China, how government workers who resisted the plan were sidelined, and what officials were instructed to tell young people whose families had been detained.

“They’re in a training school set up by the government to undergo collective systematic training, study and instruction,” the talking points read, adding, “You have nothing to worry about.” The Chinese Surveillance State, Part 1. Michael barbaro From The New York Times, I’m Michael Barbaro. 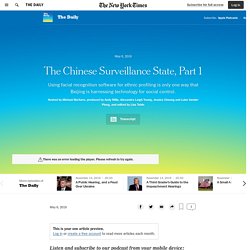 This is “The Daily.” Today: Under Xi Jinping, China is pioneering a new form of governance by surveillance. In the first of a two-part series, my colleague Paul Mozur on how China piloted that system on one minority group in the country. It’s Monday, May 6. Hi. paul mozur Headphones. Paul, we’ve actually never met. Yeah, so I’ve been reporting in and around China for about 12 years. Wow. Yeah. In what kind of places? All kinds of places. And who’s on the other side of those cameras? Yeah, it’s what I always wonder. But to the degree that there’s a rationale for this, what is it? Security. And why would China want to do that? Right. To basically make it less Muslim? Exactly. But everything really changed in 2009. Archived recording. Hikvision Markets Uyghur Ethnicity Analytics, Now Covers Up. Hikvision has marketed an AI camera that automatically identifies Uyghurs, on its China website, only covering it up days ago after IPVM questioned them on it. 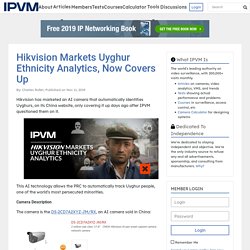 This AI technology allows the PRC to automatically track Uyghur people, one of the world's most persecuted minorities. Camera Description The camera is the DS-2CD7A2XYZ-JM/RX, an AI camera sold in China: Hikvision's product description states this camera supports Uyghur recognition (screenshot via Google Translate): Below is the text in Chinese and translated English: 支持分析人员目标的性别属性（男、女），支持分析人员目标的种族属性（如维族、汉族）以及人种肤色属性（如白人、黄种人、黑人）；支持分析人员是否戴眼镜、是否戴口罩、是否戴帽子、是否蓄胡子，识别准确率均不低于90%Get Notified of Video Surveillance Breaking News Get Notified of Video Surveillance Breaking NewsCapable of analysis on target personnel's sex (male, female), ethnicity (such as Uyghurs, Han) and color of skin (such as white, yellow, or black), whether the target person wears glasses, masks, caps, or whether he has beard, with an accuracy rate of no less than 90%.