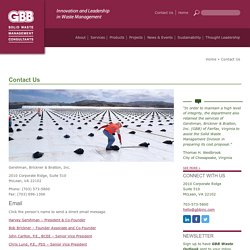 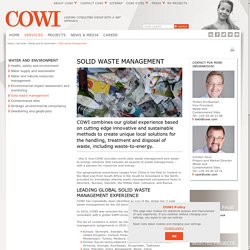 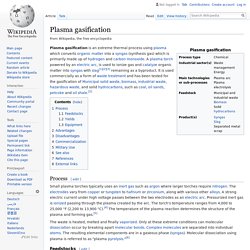 The electrodes vary from copper or tungsten to hafnium or zirconium, along with various other alloys. A strong electric current under high voltage passes between the two electrodes as an electric arc. Pressurized inert gas is ionized passing through the plasma created by the arc. The torch's temperature ranges from 4,000 to 25,000 °F (2,200 to 13,900 °C).[4] The temperature of the plasma reaction determines the structure of the plasma and forming gas.[5] Feedstocks[edit] Plasma gasification commercialization - Wikipedia. Plasma gasification is in commercial use as a Waste-to-Energy system that converts municipal solid waste (MSW), tires, hazardous waste, and sewage sludge into synthesis gas (syngas) containing hydrogen and carbon monoxide that can be used to generate power. 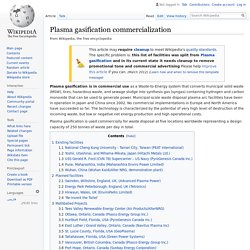 Municipal-scale waste disposal plasma arc facilities have been in operation in Japan and China since 2002. No commercial implementations in Europe and North America have succeeded so far. High-Powered Plasma Turns Garbage Into Gas. From the highway, one of the biggest landfills in the US doesn’t look at all like a dump. 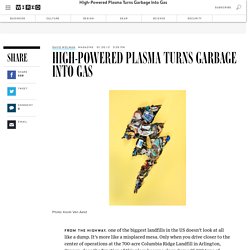 It’s more like a misplaced mesa. Only when you drive closer to the center of operations at the 700-acre Columbia Ridge Landfill in Arlington, Oregon, does the function of this place become clear. Some 35,000 tons of mostly household trash arrive here weekly by train from Seattle and by truck from Portland. Dump trucks inch up the gravel road to the top of the heap, where they tip their cargo of dirty diapers, discarded furniture, lemon rinds, spent lightbulbs, Styrofoam peanuts, and all the rest onto a carefully flattened blanket of dirt. At night, more dump trucks spread another layer of dirt over the day’s deposits, preventing trash from escaping on the breeze. But as of November, not all the trash arriving at Columbia Ridge has ended up buried. Plasma Gasification. Plasma Gasification. NRG Energy Plasma Gasification MSW. THE PLASMA CONVERTER SYSTEM (PCS. PWR - Recycling Waste into Energy (High Res) 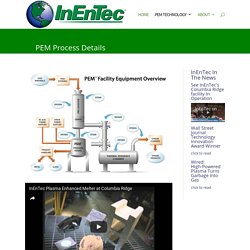 PEM systems are highly effective in processing a wide variety of waste streams, including hazardous, medical, radioactive, industrial, municipal and tire wastes; transforming them into valuable commercial products including energy (ultra-clean power generation or transportation fuels production, using the syngas) and industrial materials (chemicals from the syngas; roofing tiles, insulating panels, sand-blasting media and other construction-related products from the glass; and recoverable metals). The PEM system is environmentally attractive based on its minimal environmental impact and ability to provide near-total destruction of organic materials (providing large volume and weight reduction). Feed Systems: Feedstock is introduced to the PEM process through a feed system designed specifically for the type of materials being processed. Clean Planet Technologies. Plasma gasification: Clean renewable fuel through vaporization of waste « Recycling « Waste Management World.

Plasma gasification technology in the US is developing fast, and could be the perfect way to divert MSW from landfill and produce valuable by-products. 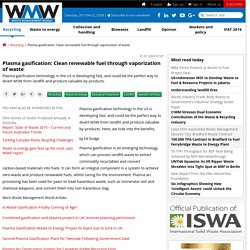 Here, we look into the benefits. by Ed Dodge Plasma gasification is an emerging technology which can process landfill waste to extract commodity recyclables and convert carbon-based materials into fuels. It can form an integral component in a system to achieve zero-waste and produce renewable fuels, whilst caring for the environment. Plasma arc waste recycling - A simple introduction. Advertisement by Chris Woodford. 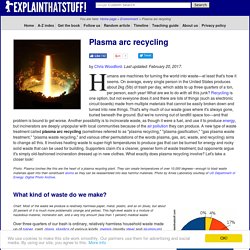 Last updated: February 20, 2017. Humans are machines for turning the world into waste—at least that's how it seems. On average, every single person in the United States produces about 2kg (5lb) of trash per day, which adds to up three quarters of a ton, per person, each year! Plasma Waste Processes - PyroGenesis Canada Inc. WASTE, REFUSE, GARBAGE, all words used to describe materials that we just don’t need any more. 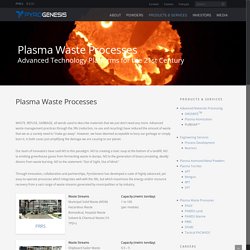 Advanced waste management practices through the 3Rs (reduction, re-use and recycling) have reduced the amount of waste that we as a society need to ”make go away”. However, we have deemed acceptable to bury our garbage or simply burn it, in both cases just amplifying the damage we are causing to our planet. Our team of innovators have said NO to this paradigm. How Plasma can fix our waste problem. Gasification Animation. Free Radical Gasification - FRG™ Responsible Energy - Free Radical Gasification (FRG™) About - PyroGenesis Canada Inc. Advanced Plasma Power - THE Energy from Waste Solution. Plasma Thermal Destruction & Recovery, PTDR – Process Overview - PEAT. Process Overview The Plasma Thermal Destruction & Recovery (PTDR) waste-to-energy technology uses the heat generated by plasma arcs in an oxygen starved (pyrolytic) environment to first, pull apart (dissociate) the molecules that make-up the organic portions of the waste, then, depending on the composition of the waste stream, a controlled (stoichiometric) amount of oxygen (either in the form of steam or pure oxygen) can be added to reform the dissociated elements of the waste into a synthesis gas ("syngas"), consisting mainly of Carbon Monoxide (CO) and Hydrogen (H2). 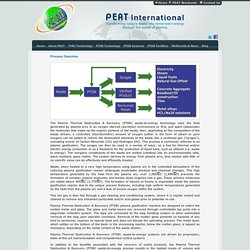 This process is commonly referred to as plasma gasification. The syngas can then be used in a variety of ways: as a fuel for thermal and/or electric energy production or as a feedstock for the production of liquid fuels, such as ethanol (i.e. waste to energy). Waste to Energy Company, Medical Waste Treatment Technology, Toxic Waste to Energy Systems - PEAT. How To Recycle Plasma & LCD / LED Televisions.