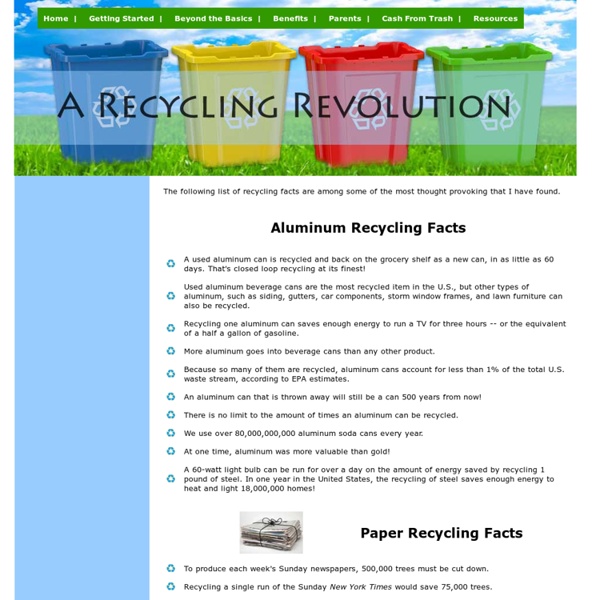 The following list of recycling facts are among some of the most thought provoking that I have found. These recycling facts have been compiled from various sources including the National Recycling Coalition, the Environmental Protection Agency, and Earth911.org. While I make every effort to provide accurate information, I make no warranty or guarantee that the facts presented here are exact. We welcome all polite corrections to our information. Please also feel free to contact us if you have additional recycling facts to share. Links to our web site are always welcome. For even more information and additional recycling facts, please visitThe National Recycling Coalition Recycling Basics The amount of information and seemingly endless facts about recycling is overwhelming. What to Recycle Next Now that you are more comfortable with the recycling basics, we can start doing even more to help the environment. Recycling Benefits Recycling benefits are numerous.

Biofuels From Algae, Wood Chips Are Approved for Use by Passenger Airlines Airlines won the backing of a U.S.- based technical-standards group to power their planes with a blend of traditional fuel and biofuel from inedible plants, the Air Transport Association said today. Fuel processed from organic waste or non-food materials, such as algae or wood chips, may comprise as much as 50 percent of the total fuel burned to power passenger flights, ATA spokesman Steve Lott and a Boeing Co. (BA) official told Bloomberg. “The real winners of this type of regulatory breakthrough will be technology companies involved in the production of aviation biofuels,” said Harry Boyle, an analyst at Bloomberg New Energy Finance in London. Other biofuels companies that may benefit from opening up the $139 billion-a-year aviation fuel market are Neste Oil Oyj (NES1V) of Finland, Spain’s Abengoa SA and Honeywell International Inc. Officials from Neste, Abengoa weren’t available for comment. Carbon-Neutral General Electric Honeywell, Indian Oil

CBI calls for end to delays on renewable energy | Environment CBI says business want to get on with low-carbon projects but is hampered by policy uncertainties. Photograph Mark Mitchell/Reuters Business leaders are to accuse ministers of failing to lay the groundwork fast enough for the raft of urgently needed low-carbon energy projects that are vital if Britain is to plug the widening gap between its energy requirements and its fast dwindling sources of power. The CBI employers' group is urging the government to set out long-term, business-friendly guidelines that will give companies the confidence to invest in green energy infrastructure projects. About a third of the UK's energy supply is scheduled to dry up over the next 10 years and the government has pledged to fill the gap in large part with low-carbon energy sources. Katja Hall, chief policy director for the CBI, said: "We need the government to set a clear direction of travel and to stick to it.

Using waste heat to fill the bath: desalination in Abu Dhabi Last week, we covered one of the talks from a great session on using waste as a resource that took place at the annual meeting of the American Association of the Advancement of Science (AAAS). That one was about using farmyard byproducts to generate biogas, but it wasn't the only example of increasing energy efficiency through capturing waste. David Scott gave a presentation on how Abu Dhabi is meeting its fresh water needs using waste heat from power generation, and it's a strategy that might come in handy here in the US in the not-too-distant future. One of the Gulf states, Abu Dhabi has lots of natural gas and plenty of spare heat, with some of the hottest temperatures recorded on our planet during their summer. As a result, the thermal efficiency of its gas turbine plants, even when run on a combined cycle (where waste heat powers a secondary steam generator) is only about 41 percent, compared to up to 60 percent in more temperate climates. So far, not so good.

Hauling manure from the farmyard to the power plant Meeting the 21st century's energy needs is a frequent topic at the annual meetings of the American Association for the Advancement of Science (AAAS). In the past we've covered many sessions on a range of topics from solar to nuclear and beyond. One thing is quite evident at this point: there will be no single replacement for our current dependence on coal, gas, and oil. Yes, that's right, manure. As Dr. Now UC Davis is making use of up to eight tons of agricultural byproducts, leftover food, and biomass from municipal waste (think paper and cardboard) a day to generate as much 1200 kW hours/day. Local power generation ought to be part of our future energy plans. Sadly, here in the US, there are only about 100 such bioreactors, thanks to huge regulatory and legislative barriers that vary from state to state and municipality to municipality.