Pythagorean Theorem and its many proofs. Professor R. 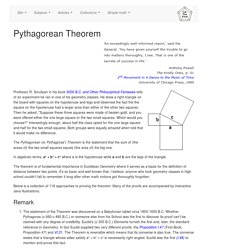 Smullyan in his book 5000 B.C. and Other Philosophical Fantasies tells of an experiment he ran in one of his geometry classes. He drew a right triangle on the board with squares on the hypotenuse and legs and observed the fact the the square on the hypotenuse had a larger area than either of the other two squares. Then he asked, "Suppose these three squares were made of beaten gold, and you were offered either the one large square or the two small squares. Which would you choose? " Interestingly enough, about half the class opted for the one large square and half for the two small squares. The Adventures of Alexandria Jones. I hope it is obvious that Alexandria Jones and her family are fictional. 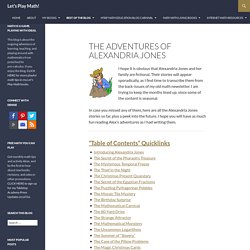 Their stories will appear sporadically, as I find time to transcribe them from the back-issues of my old math newsletter. I am trying to keep the months lined up, since some of the content is seasonal. In case you missed any of them, here are all the Alexandria Jones stories so far, plus a peek into the future.

I hope you will have as much fun reading Alex’s adventures as I had writing them. You're in a space of twisty little mazes, all alike. It started with a mini-challenge on the #perl6 channel. 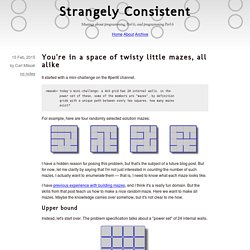 <masak> today's mini-challenge: a 4x4 grid has 24 internal walls. in the power set of these, some of the members are "mazes", by definition grids with a unique path between every two squares. how many mazes exist? For example, here are four randomly selected solution mazes: I have a hidden reason for posing this problem, but that's the subject of a future blog post. Optimal Fence Riddle. A long time ago I found a website with a very interesting riddle. 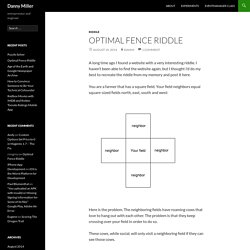 I haven’t been able to find the website again, but I thought I’d do my best to recreate the riddle from my memory and post it here. You are a farmer that has a square field. Your field neighbors equal square-sized fields north, east, south and west: Here is the problem. Popularity contest - Tweetable Mathematical Art. Prime Explorer. Famous Unsolved Math Problems as Homework. By Benjamin Braun, Editor-in-Chief, University of Kentucky One of my favorite assignments for students in undergraduate mathematics courses is to have them work on unsolved math problems. 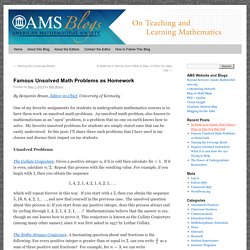 An unsolved math problem, also known to mathematicians as an “open” problem, is a problem that no one on earth knows how to solve. My favorite unsolved problems for students are simply stated ones that can be easily understood. Happy Saint Math Tricks Day 2011. Circles. Fibonacci Flim-Flam. The Fibonacci Series. 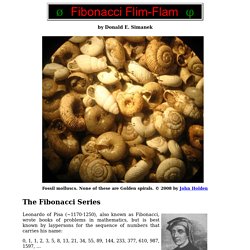 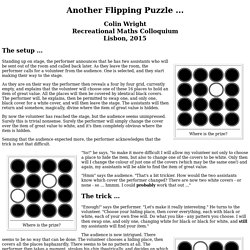 Standing up on stage, the performer announces that he has two assistants who will be sent out of the room and called back later. Penrose Tiling. Folding fractions. Can you fold a piece of paper in half? 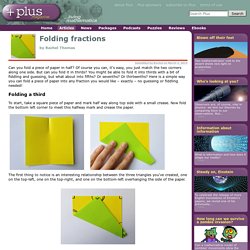 Of course you can, it’s easy, you just match the two corners along one side. But can you fold it in thirds? Mathbreakers! A 3-D Math Exploration Game by Imaginary Number Co. Founded by Morgan, Charlie, & Vivian. 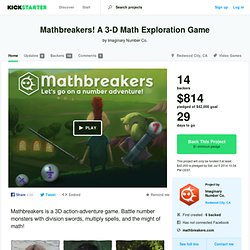 Scroll down to the team section for our story ;-) "This game is epic! " -Eric, age 8. Rubicon : A Machine-Building Puzzle Game. Rubicon is a machine-building puzzle game, based on Chris Pressey's RUBE programming language.

Using a selection of bulldozers, pipes, conveyor belts and other mechanisms, you must build machines to transport numbered crates to their destinations. Each playable game level has one or more targets - if a target has the same crate above and below it, it lights up green (if the crates are different, it lights up red). To complete a puzzle level, you must make all of its targets light up green. Rubicon comes with twelve pre-built puzzle levels. To play levels that other Rubicon users have designed, or to design and share your own, the Rubicon Forum has threads for sharing and discussing both puzzle-style levels and abstract design challenges. How to Play When playing the basic levels, or a level designed by another user, you'll be presented with a partially built machine (including at least one target), and must build further components in order to move crates to their correct destinations.

An Interactive Introduction to Graphics Programming. This is a proposal and proof-of-concept for an interactive book about programming the graphics processor. Modern computers come with two separate processors, two “brains”: The traditional CPU, the Central Processing Unit The newer GPU, the Graphics Processing Unit Almost all books and courses about programming only teach you how to program the CPU. GPU programming is esoteric. Learning resources are targeted at experienced programmers who need to use the GPU for applications like high-performance video games and scientific simulations. Yet there is a unique joy to programming the graphics processor. This book is intended to bring the wonder and joy of graphics processor programming to a wider audience. An Interactive Book. Quick Reference Guide. 1ucasvb's lab. 79629813053 305 1394863200 mrfb asked: What are your thoughts on the pi v. tau debate? (For those unaware of the Pi. vs. Tau debate, read the Tau Manifesto and then the Pi Manifesto).

I’m actually extremely pro-tau, but only under certain conditions. I’ll explain. Math Puzzles For Kids - Free Math Games for Schools. Free Teaching Tool: KenKen Classroom KenKen was born in a math classroom—and we want it to stay there! That’s why we introduced our KenKen Classroom Program for teachers. Every week, we’ll email you a set of free KenKen puzzles that is perfect for student use! As the challenge level subtly shifts week to week, students develop their math and logical thinking skills without even knowing it.

Maze Tree. [1404.5199] Social cycling and conditional responses in the Rock-Paper-Scissors game. Havel-Hakimi. Non-transitive Dice. Three Unusual Dice Here is a game you can play with a friend. It is a game for two players, with a set of three dice. These dice are not typical dice however, because instead of having the values 1 to 6, they display various unusual values. Each player picks a die. On primes and Pluto. Demotivationalpostersyoucandoanythingyouputyourmindto.jpeg (492×520) December 2013. On The 3x + 1 Problem. On the 3x + 1 problem. Alcumus. Alcumus offers students a customized learning experience, adjusting to student performance to deliver appropriate problems and lessons.

Alcumus is specifically designed to provide high-performing students with a challenging curriculum appropriate to their abilities. Liouville number. A216598 - OEIS. The PuzzlOR. The PuzzlOR. MathGifs: Buffon's Needle (and his Noodles)