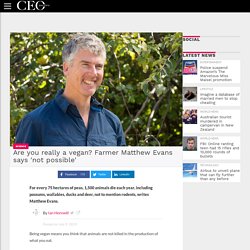 By Ian Horswill Posted on July 9, 2019 Being vegan means you think that animals are not killed in the production of what you eat. However Matthew Evans, a former food critic who now calls himself a gourmet farmer and restauranteur, says that notion is simply untrue. In his new book, On Eating Meat: The Truth About Its Production And The Ethics Of Eating It, Evans writes the uncomfortable truth that animals die regardless of whether we choose to eat meat or not. “It’s quite possible that eating less meat might mean less suffering. “When you eat, you’re never truly vegan. He says about 40,000 ducks are killed each year to protect rice production in Australia; that a billion mice are poisoned every year to protect wheat in Western Australia alone, and apple growers can kill up to 120 possums a year to protect their orchards.

Yes, eating meat affects the environment, but cows are not killing the climate. As the scale and impacts of climate change become increasingly alarming, meat is a popular target for action. 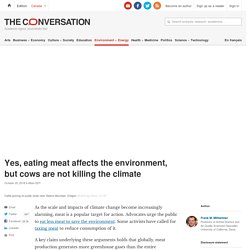 Advocates urge the public to eat less meat to save the environment. Some activists have called for taxing meat to reduce consumption of it. A key claim underlying these arguments holds that globally, meat production generates more greenhouse gases than the entire transportation sector. However, this claim is demonstrably wrong, as I will show. And its persistence has led to false assumptions about the linkage between meat and climate change. My research focuses on ways in which animal agriculture affects air quality and climate change. Setting the record straight on meat and greenhouse gases A healthy portion of meat’s bad rap centers on the assertion that livestock is the largest source of greenhouse gases worldwide. According to the U.S.

Overcoming the Barrier of Racism in Our Capitalist Food System : Food First. You can now go to prison in Canada for providing raw milk. Seriously. As Canada ambles along towards the day when its prisons will empty of people who did nothing more heinous than possess marijuana, the province of Ontario appears eager to fill its empty jail cells with individuals whose so-called crime was distributing raw milk. 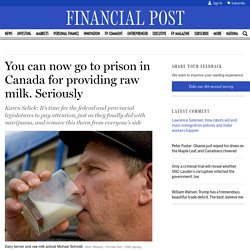 On Jan. 5, 2018, Justice P. W. Sutherland of Ontario’s Superior Court of Justice imposed an injunction in a case called Downing v. ARC. Downing is the provincial Milk Act Director, while ARC is an incorporated farm co-op that allegedly was distributing raw milk, but has now closed down its milk operation. As is often the case when raw milk makes headlines, the case involved farmer Michael Schmidt, who has campaigned for decades for the legal right to fill the niche market for unpasteurized milk and cheese. But that won’t be the only unintended consequence of the order. Schmidt’s operation has a 25-year history of safety.

But Ontario stubbornly refuses to reconsider the legislation. 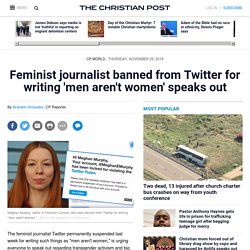 The social media giant, she notes, seems to have a particular problem with women who dissent from the claims of transactivists and they unfairly hijack the dialogue about these issues. Meghan Murphy, the Vancouver, British Columbia-based founder and editor of the independent website Feminist Current, has never shied away from criticizing and asking questions about transgender ideology, often highlighting the threat it poses to women's rights. Yet in recent months, efforts to silence her have notably increased. "It’s about a cultish movement that is flexing its muscle on campuses, in civic organizations, at public events, and in the back offices of social-media companies, to strike down anyone who dares point out that the gender emperor wears no clothes.

How reviving traditional farming helped Kerala tribal communities become healthy. Due to poverty and dependence on government rations, the communities had become malnourished and prone to several non-communicable diseases. 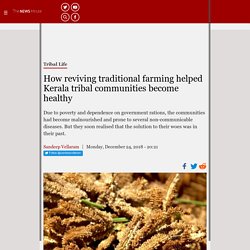 But they soon realised that the solution to their woes was in their past. Three years ago, officials of the Chinnar Wildlife Sanctuary at Idukki in Kerala conducted a medical camp for the tribal natives residing in the sanctuary. While the officials were expecting to see widespread malnutrition and related ailments, the final results of the camp, they say, left them saddened and in pain. Many residents were not just afflicted with diseases like anaemia and goitre, there was also a high prevalence of non-communicable diseases like high cholesterol, high blood-pressure and diabetes. The doctors told officials that the very existence of the tribes was at risk.

“We held further enquiries and found that most of the tribal people survived on under-nutritious food and black tea. The rebirth of their agriculture Recognition for tribal people.