Suggested move to plant-based diets risks worsening brain health nutrient deficiency: And UK failing to recommend or monitor dietary levels of choline, warns nutritionist. The momentum behind a move to plant-based and vegan diets for the good of the planet is commendable, but risks worsening an already low intake of an essential nutrient involved in brain health, warns a nutritionist in the online journal BMJ Nutrition, Prevention & Health. 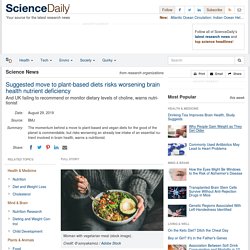 To make matters worse, the UK government has failed to recommend or monitor dietary levels of this nutrient -- choline -- found predominantly in animal foods, says Dr Emma Derbyshire, of Nutritional Insight, a consultancy specialising in nutrition and biomedical science. Choline is an essential dietary nutrient, but the amount produced by the liver is not enough to meet the requirements of the human body. Choline is critical to brain health, particularly during fetal development. It also influences liver function, with shortfalls linked to irregularities in blood fat metabolism as well as excess free radical cellular damage, writes Dr Derbyshire.

There is nothing inevitable or natural about chronic disease. Vagus Nerve Stimulation Dramatically Reduces Inflammation. Vagus nerve in yellow. 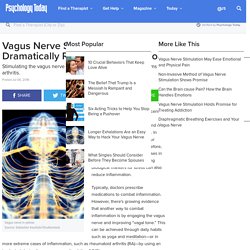 Source: Sebastian Kaulitzki/Shutterstock Inflammatory responses play a central role in the development and persistence of many diseases and can lead to debilitating chronic pain. In many cases, inflammation is your body's response to stress. Therefore, reducing "fight-or-flight" responses in the nervous system and lowering biological markers for stress can also reduce inflammation. article continues after advertisement Typically, doctors prescribe medications to combat inflammation.

The vagus nerve is known as the "wandering nerve" because it has multiple branches that diverge from two thick stems rooted in the cerebellum and brainstem that wander to the lowest viscera of your abdomen touching your heart and most major organs along the way. In 1921, a German physiologist named Otto Loewi discovered that stimulating the vagus nerve caused a reduction in heart rate by triggering the release of a substance he coined Vagusstoff (German for "Vagus Substance”).

Dr. John Ioannidis Exposes the Bad Science of Colleagues. In the late 1990s, Ioannidis set up a base at the University of Ioannina. 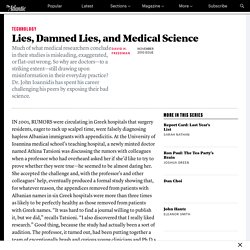 He pulled together his team, which remains largely intact today, and started chipping away at the problem in a series of papers that pointed out specific ways certain studies were getting misleading results. Other meta-researchers were also starting to spotlight disturbingly high rates of error in the medical literature. But Ioannidis wanted to get the big picture across, and to do so with solid data, clear reasoning, and good statistical analysis.

The project dragged on, until finally he retreated to the tiny island of Sikinos in the Aegean Sea, where he drew inspiration from the relatively primitive surroundings and the intellectual traditions they recalled. “A pervasive theme of ancient Greek literature is that you need to pursue the truth, no matter what the truth might be,” he says. Office of Science Outreach. Obesity, Type 2 Diabetes, and FructosePart 1: The TrendsSince the mid-1970's, Americans have been getting bigger. 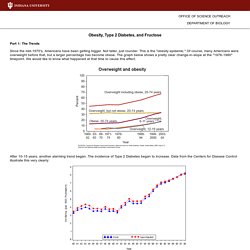 Not taller, just rounder. This is the "obesity epidemic. " Of course, many Americans were overweight before that, but a larger percentage has become obese. The graph below shows a pretty clear change-in-slope at the "1976-1980" timepoint. We would like to know what happened at that time to cause this effect. Jaundice in newborns could be an evolutionary safeguard against death from sepsis. In newborn babies, jaundice is so common as to be termed physiological. 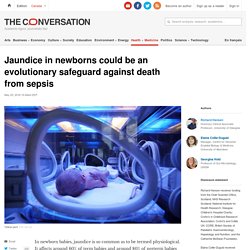 It affects around 60% of term babies and around 80% of preterm babies in the first week of their lives. Clinicians need to monitor it carefully and sometimes treat it, since it can lead to conditions like acute bilirubin encephalopathy and kernicterus that can damage the infant’s brain and cause developmental problems. But it now looks as though this jaundice is not merely one of the pitfalls of entering the world. New research just published in Scientific Reports, in which we have been involved, suggests that it is one of the gifts of evolution. Humans may develop jaundice as newborns to protect from something even more serious: sepsis.

When most people think of jaundice, they probably think of yellow skin. The unexplained why In this lies a mystery: why have humans not evolved to overcome this temporary bilirubin problem? The search begins The results of this project have just been published. What These Medical Journals Don’t Reveal: Top Doctors’ Ties to Industry.