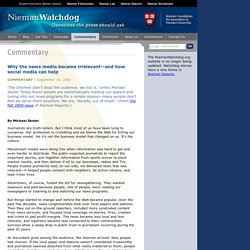 Part 3. The Rise of Do-it-yourself Journalism After September 11. Key Findings. 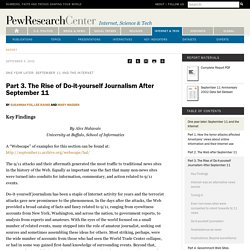 The 100,000 words a day that ruin our concentration. By Fiona Macrae for the Daily Mail Updated: 23:57 GMT, 13 December 2009 Having trouble concentrating on this story? 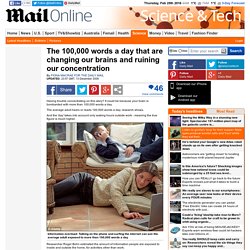 It could be because your brain is bombarded with more than 100,000 words a day. The average adult hears or reads 100,500 words a day, research shows. And the 'day' takes into account only waking hours outside work - meaning the true figure is much higher. Information overload: Talking on the phone and surfing the internet can see the average adult exposed to more than 100,000 words a day. All Day by Girl Talk, Annotated. Fastcompany. There's a small chance if you took your entire music collection and mixed it all together that it might sound decent, but more likely it'd sound like a trash compactor. 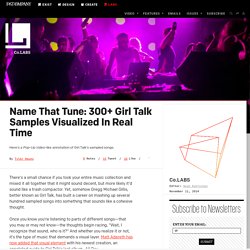 Yet, somehow Gregg Michael Gillis, better known as Girl Talk, has built a career on mashing up several hundred sampled songs into something that sounds like a cohesive thought. Once you know you're listening to parts of different songs—that you may or may not know—the thoughts begin racing, "Wait, I recognize that sound, who is it? " And whether you realize it or not, it's the type of music that demands a visual layer. Musique concrète. History[edit] Beginnings[edit] In 1928 music critic André Cœuroy wrote in his book Panorama of Contemporary Music that "perhaps the time is not far off when a composer will be able to represent through recording, music specifically composed for the gramophone" (Cœuroy 1928, 162). 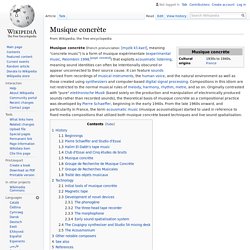 In the same period the American composer Henry Cowell, in referring to the projects of Nikolai Lopatnikoff, believed that "there was a wide field open for the composition of music for phonographic discs. " Waiting For A Ying Yang Twins/ ABBA Collabo? Girl Talk Has Your Record. Mash-up artist brings a house party vibe - Tucson Citizen Morgue, Part 2 (1993-2009) FreelanceMusic Special to Metromix.com. 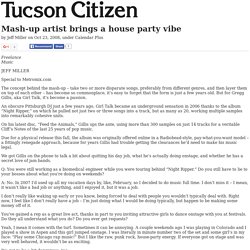 Signal or Noise: the Future of Music on the Net. The ABCs of MP3: A Crash Course in the Digital Music Phenomenon By Michelle Spaulding Fellow, Berkman Center for Internet & Society THE TECHNOLOGY MP3 stands for MPEG 1 (Moving Picture Experts Group 1), audio layer 3, and is a technique designed to compress bulky files of digitized music to facilitate ease of download and storage for bandwidth- and disk space-starved music fans. 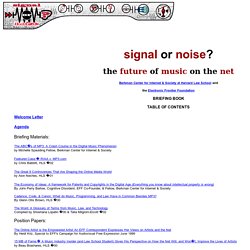 (While MP3 can be used for any digital audio, such as audiobooks, this paper focuses on the controversies that have arisen to date involving its facilitation of music transmission.) THE ISSUE Unlike its precursors, like RealAudio, MP3 compression technology allows a user to download near-CD quality digitized sound recordings quickly and to store them using minimal disk space.

Is Fair Use Regaining Its Mojo? Many musicians cower at actually using the “fair use doctrine” of copyright law because they know that Big Media has the legal firepower to impose its own definition of the law. 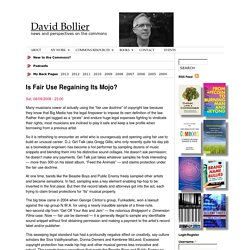 Rather than get tagged as a “pirate” and endure huge legal expenses fighting to vindicate their rights, most musicians are inclined to play it safe and keep a low profile when borrowing from a previous artist. Steal This Hook? Girl Talk Flouts Copyright Law. Remaking copyright for the digital age. In RiP: A Remix Manifesto, documentary filmmaker Brett Gaylor explores the toll copyright laws have exacted on both content creators and consumers in North America. 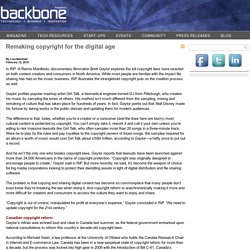 While most people are familiar with the impact file sharing has had on the music business, RiP illustrates the stranglehold copyright puts on the creation process as well. Gaylor profiles popular mashup artist Girl Talk, a biomedical engineer-turned-DJ from Pittsburgh, who creates his music by sampling the tunes of others. His method isn’t much different from the sampling, mixing and remaking of culture that has taken place for hundreds of years. In fact, Gaylor points out that Walt Disney made his fortune by taking works in the public domain and updating them for modern audiences. Cassidymccraney.com: How Many Licks Does It Take To Get To The Center Of A Schwartzman? 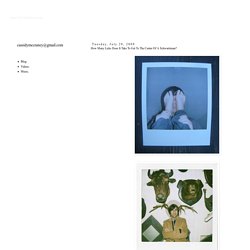 Saul Williams and Larry Lessig on Sound Opinions at FISTFULAYEN. After hearing a promo for it on This American Life‘s podcast, I started listening to Sound Opinions, a syndicated radio program and podcast from Chicago Public Radio, self-described as “the world’s only rock n roll radio talk show”, hosted by Chicago newspaper music critics Jim DeRogatis and Greg Kot. It’s awesome. They do a great job of mixing music news and pop music with in-depth interviews, live performances, and plain ol’ “good music”. If you love music, subscribe to this bad boy and enjoy. Rethinking Sex Offender Laws for Youths Showing Off Online. In Florida, Phillip Alpert, then 18, was charged with distributing and put on the sex offenders registry because after a fight, he sent a photograph of his nude 16-year-old girlfriend by e-mail to dozens of people, including her parents.

In most states, teenagers who send or receive sexually explicit photographs by cellphone or computer — known as “sexting” — have risked felony child pornography charges and being listed on a sex offender registry for decades to come. But there is growing consensus among lawyers and legislators that the child pornography laws are too blunt an instrument to deal with an adolescent cyberculture in which all kinds of sexual pictures circulate on sites like and .

Court Says Parents Can Block ‘Sexting’ Cases. The Muppets’ History of Violence. From their 2011 hit film to a new mockumentary-style television show reportedly in the works, the Muppets are officially back. And while it’s not easy being green, Kermit is awash in greenbacks — shilling for Lipton Tea among other corporate titans — thanks to the puppet troupe’s return to the spotlight. Now, if you’re wondering whether the Muppets’ commercial turn has their creator, Jim Henson, who died 25 years ago today, turning over in his grave, the answer is: not likely. Is Weed Bad For You? The Arguments For and Against Marijuana's Supposed Health Risks. According to a new report this week from a United Nations health commission, marijuana consumption has increased among Americans over the past four years, and more people are seeking treatment for marijuana-related health concerns. The number of people over the age of 11 who’ve used marijuana at least once in the last year rose from 10.3 percent to 12.1 percent in 2012, while there was a 59 percent increase in cannabis-related hospital visits from 2006 and 2010.

At the same time, public perception of marijuana-related health risks has declined, while THC levels in marijuana have increased. While the measurements were taken before Colorado and Washington legalized recreational marijuana use, the report is sure to factor into the ongoing national debate on marijuana legalization. We thought now would be a good time to take a look at some common marijuana-related health claims and see how much water they actually hold.

Claim: Marijuana harms the lungs Claim: Marijuana is addictive. 8 Famous People In History You Didn't Realize Were Bisexual. Bisexuality is far older than it may seem. Flaming Lips Reissuing “Clouds Taste Metallic” as Massive Deluxe Boxed Set. Mother Teresa Was Kind of a Heartless Bitch. Nearly 25 Years Ago, Nirvana Released an Album So Perfect It Ruined Rock 'n' Roll. Why Saying 'Bisexual' Is More Important Than Ever. A pair of recent studies found that one in three young adults in the United States identify on the bisexual spectrum, and one in two in the U.K. Healthy News and Information. Trouble Sleeping? Here’s How I Learned To Fall Asleep In Under 1 Minute Every Night. How The Kardashians Manipulated The Media To Become The Most Famous Family In The World. This Woman Has Been on Vacation for Three Years. Here’s What Happened When a Guy in Amsterdam Quit Sugar for a Month. Why Do Rappers Put on Fake Accents?

A taxonomy of the sad girl. The Internet's New Favorite Comedian Is A Ten-Year-Old Girl. This Man Thinks He Never Has to Eat Again. The Last Meals of Death Row Inmates, Beautifully Recreated [Slideshow] Future - Meet Zoltan, the presidential candidate who drives a coffin. Stop watching TV! (and check out Timothy Leary's "Brain Manual") The Japanese Love Industry. The Confessions. 9 Guys We Need to Ban From Dating Apps in 2016. Generation Cry Baby: Why Millennials Are a F**king Joke. Did You Know These 10 Amazing Facts About Bananas? ‘What is Punk?’: Children’s book answers that question with clay figures of Iggy Pop and the Clash.

The Best Quotes About Love and Sex, in Honor of National Poetry Day: Smitten.com. Why the average woman should care about Candida Royalle, “the Grace Kelly of porn” Mystery condition makes woman age 50 years in just a few days after eating seafood. THOTs and Hoes and Thoughts of Maya Angelou. 5 Reasons You Hated School (That You Were Right About) Maitresse Madeline Marlowe. Children's Picture Book 'What Is Punk?' Introduces Toddlers to Way Better Music Than Raffi — IMAGE REVEAL. 26 Pictures That Show Just How Hardcore ’70s Punk Really Was. What Goth Culture Looks Like Around The World. Women's Rights News - Viralwomen.com.

Kurt Cobain’s ‘MTV: Unplugged’ sweater sells for a staggering $140,800 at auction. Advice from 30 year old me to 20 year old me. 67-year-old grindcore-singing mom is way more brutal than you. Woman Takes Down Planned Parenthood Protesters With 'Yeast Infections' Chant. Truth Is Just as Fascinating as Fiction.

Searching for Huggy Bear: Riot Grrrl and Queerness in the American South. Listen to this organ in Croatia that uses the sea to make hauntingly beautiful music. Police Use Axe Body Spray to Break Up Crust Punk Protest. Orthorexia: An Unhealthy Obsession With Healthy Eating. New Research Claims That Going Down On Women Is Good For Your Health. Doctors Claim ‘B.J’s’ Are Good For Women’s Health And Even Help Fight Depression.