The Industrialized Diet, Nourishing Traditions, & The Contagion Myth. Could Deuterium be the Cause of Your Illness? I’m super excited to feature this guest blog post by Ashley Armstrong (@strongsistas on instagram), a PhD candidate in mechanical engineering, and overall super smart woman. 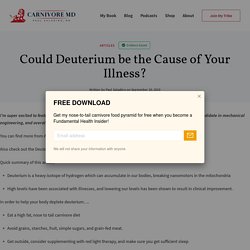 You can find more from Ashley & Sarah Armstrong on their website. Also check out the Deuterium podcast! Quick summary of this article: Deuterium is a heavy isotope of hydrogen which can accumulate in our bodies, breaking nanomotors in the mitochondriaHigh levels have been associated with illnesses, and lowering our levels has been shown to result in clinical improvement. In order to help your body deplete deuterium…. Eat a high fat, nose to tail carnivore dietAvoid grains, starches, fruit, simple sugars, and grain-fed meat. For a great summary video about deuterium from Dr. The Center for Deuterium Depletion is doing a study on those eating a carnivore diet and deuterium levels!

To sign up for this study or learn more go here. All the details: Do you want to live a long, chronic disease free, and radical life? Deuter what? Man In 'Go Vegan & Die' Vest Eats Raw Meat At Plant-Based Festival. Police were called to a vegan festival in Amsterdam, after an attendee was found gnawing on raw meat, wearing a vest that said: "Go vegan and die. 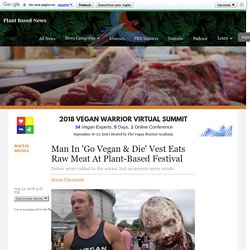 " While reports have not revealed the man's identity, Plant Based News believes it was an anti-vegan Youtuber named sv3rige, who is also known for being a flat-Earther. The YouTuber was quizzed by police, who attended the scene after attendees of the Vegan Food Festival complained. sv3rige chewed on the flesh as he was questioned, refusing to reveal his name. Police later confirmed no arrests were made. 'Vegans hate nature' Writing on social media, sv3rige said: "The media lied that I threw meat at the organization, that never happened.

"They had no reason to call the police and they knew that so they made up a lie. "As you can see, we were attacked by the vegans. GRAPHIC: sv3rige gnaws on the raw meat 'A shocking sight' "Besides, there were lots of elderly people and children. "It was a weird protest by the gentleman. Is Meat Good or Bad for You? “Dr. 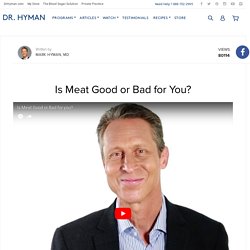 Hyman, I see so many conflicting reports about meat,” begins this week’s house call question. “Some say it can be part of a healthy diet. Others declare it is the root cause of disease – including heart disease, cancer and diabetes. I have friends who completely avoid it and other friends of mine who embrace meat as an everyday staple. What’s the truth about meat?” I understand your confusion, especially with the conflicting, sometimes misleading information out there. There are very real concerns involving meat, including the ethical treatment of animals and their impact on the environment, as well as medical and health issues. From a health and wellness standpoint, we question if eating meat truly causes heart disease, cancer and leads to a shorter life.

It’s not hard to see why the average person, or even doctor or nutritionist is confused. Studies that take a pro- or anti-meat stance often miss the bigger picture. What about featuring Paleo enthusiasts in these studies? The truth about your food: meat is poison. The Truth Behind Meat and Dairy. Pinterest. The Beginner's Guide To The Autoimmune Protocol / Ultimate Paleo Guide. How To Lose 131 Pounds By Eating Meat: The Rick Rubin Podcast. Live to 110 Podcast #11: Best Healing and Detox Methods with Dr Lawrence. The Politically Incorrect Truth About the Cult Of Vegetarianism - The Health Wyze Report.

This Guy's Eaten Nothing but Raw Meat for Five Years. Meet Derek Nance. 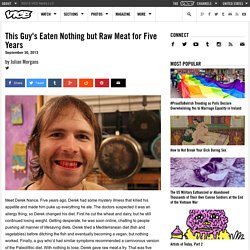 Five years ago, Derek had some mystery illness that killed his appetite and made him puke up everything he ate. The doctors suspected it was an allergy thing, so Derek changed his diet. First he cut the wheat and dairy, but he still continued losing weight. Getting desperate, he was soon online, chatting to people pushing all manner of lifesaving diets. Derek tried a Mediterranean diet (fish and vegetables) before ditching the fish and eventually becoming a vegan, but nothing worked. VICE: Hi, Derek. Derek: So it was started by a dentist named Weston Price who in the 1930s studied the health benefits of eating more raw foods, including meats. Was there any deliberation? Not really because I’d been sick for such a long time that I was willing to give anything a try. Dear God. No. Derek’s dinner. And you’ve eaten nothing else since? Yeah, for nearly six years. How do you avoid scurvy? The organ meat of the animal actually contains vitamin C. Derek’s hit of vitamin C.

No. Gnostic Media 221 - Curtis Duncan: "Homosexuality and the Chemical Manipulation of Humanity"