Devil Music: A History of the Occult in Rock & Roll. In 1968 the former studio guitarist and member of the Yardbirds Jimmy Page formed his new quartet Led Zeppelin. 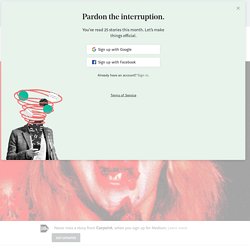 Signed to the major label of Atlantic Records and abetted by the loyal and fiercely protective management of Peter Grant, Led Zeppelin quickly gathered a large following in the United Kingdom, Europe, and especially the United States, where their histrionic and very heavy brand of electric blues appealed to the restless post-Sgt. Pepper student cohort. Brian Eno is MORE DARK THAN SHARK. The Residents - One-Minute Movies. Why Doctor Strange shares its psychedelic DNA with Pink Floyd. 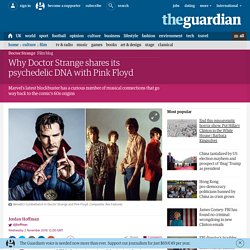 I Pink Floyd nel Paese delle meraviglie. Nearly 25 Years Ago, Nirvana Released an Album So Perfect It Ruined Rock 'n' Roll. At the same time, however, Cobain wanted the song to be the a perfectly accessible p. 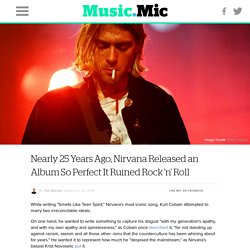 When these two volatile impulses came together, the impact they had was catastrophic. The strength of "Smells Like Teen Spirit" helped launch Nevermind to the top of the charts, dethroning King of Pop Michael Jackson from the No. 1 seat. The album turned Nirvana into an imperial power in rock 'n' roll, but that success came with a huge price tag listeners are still paying back. Nevermind proved alternative rock could be big business. The void that Kurt Cobain's death created encouraged labels to seek another star — someone who might be more open to playing the fame game. Rock 'n' roll never recovered from Nevermind, which dropped 24 years ago Thursday. Mark Fisher on The Pop Group's enduring radicalism. “We were cannibal kids finding love amongst the ruins of Thatcher’s slash and burn agenda,” says singer Mark Stewart of The Pop Group. 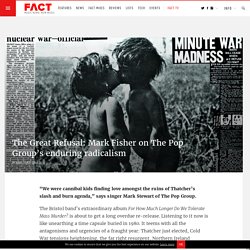 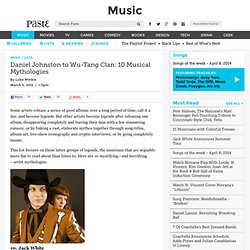 But other artists become legends after releasing one album, disappearing completely and leaving their fans with a few simmering rumors; or by linking a vast, elaborate mythos together through song-titles, album-art, live-show iconography and cryptic interviews; or by going completely insane. This list focuses on those latter groups of legends, the musicians that are arguably more fun to read about than listen to. Here are 10 mystifying—and horrifying—artist mythologies. 10. Jack White Jack White makes his way onto this list not because he’s got a massive, interconnected universe behind his music; in fact he hasn’t really shied away from media appearances and interviews. 9. Power Lunch with social critic Lydia Lunch.

She was a complicated, poetry-writing teenager obsessed with rock concerts and the works of Henry Miller and the Marquis de Sade, yet she makes her escape sound deceptively easy. 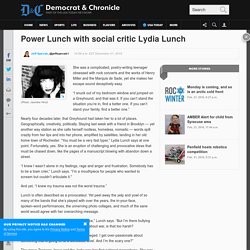 “I snuck out of my bedroom window and jumped on a Greyhound, and that was it. If you can’t stand the situation you’re in, find a better one. Dylan, Bob 2016. Bob Dylan. BOB DYLAN lyrics. Related artists:THE TRAVELING WILBURYS sort by album sort by song album: "Bob Dylan" (1962) 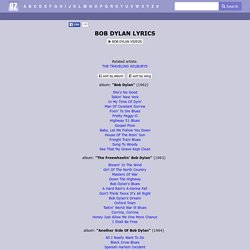 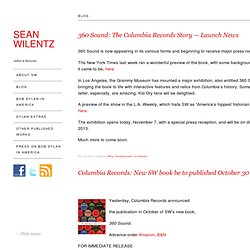 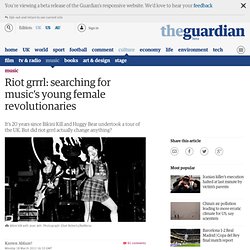 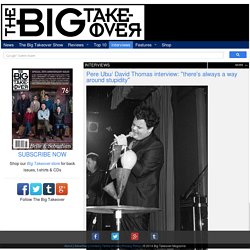 Elitism For The People: In Praise Of Pere Ubu. Pretend the band Pere Ubu broke up just now. The proverbial visibly-shaken town crier bursts onto the balcony and bellows, “Pere Ubu is dead!” Such a scenario would mark the end of one of the most impressive careers in the history of American rock music. Though the band has suggested––both facetiously and seriously (as is the Ubu way)––that its primary achievement is its stunning “loss to longevity ratio” (nearly forty years of existence without even a crossover hit to hang its hat on), it undoubtedly belongs in the American rock pantheon. Yet in the proverbial plaza below, the news does not spread swiftly among the people. Frequently Asked Questions: Pere Ubu. From what I gather, you're not particularly fond of The Modern Dance - or, at least, as fond as of any other of Ubu's releases.

Still, it has always been a favourite from critics and fans alike. In fact, it remains the band's most popular album. Why Do Rappers Put on Fake Accents? Everyone has an accent. They shape who we are and reflect where we come from. They allow strangers to judge us within a split-second of opening our mouth. They make average-looking people slightly more attractive. The way a voice sounds impacts the music an artist makes, too. In the early 00s a group called Silibil ‘n’ Brains fooled the entire music industry and landed a record deal by hiding their Scottish accents underneath a Californian drawl.

Iggy Azalea left Australia at the age of 16 to move to Miami.