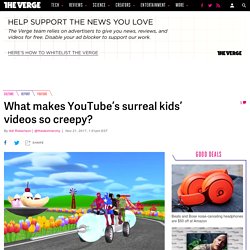 These weren’t overtly violent, sexual, or scatological videos, but they felt viscerally wrong. These 'Surprise Egg' Videos Are Making Kids Obsessed. For the past several weeks I have been captivated by videos of adults opening Kinder eggs. 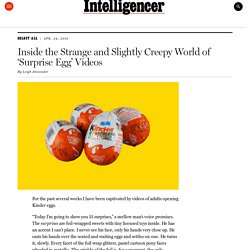 “Today I’m going to show you 55 surprises,” a mellow man’s voice promises. The surprises are foil-wrapped sweets with tiny licensed toys inside. He has an accent I can’t place. I never see his face, only his hands very close up. He casts his hands over the seated and waiting eggs and settles on one. The chocolate is secondary. The Sad Truth About Surprise Egg Opening Videos. Kids are obsessed with surprise egg opening videos on YouTube with great search-engine optimized names like “NEW Huge 101 Surprise Egg Opening Kinder Surprise Elmo Disney Pixar Cars Mickey Minnie Mouse”. 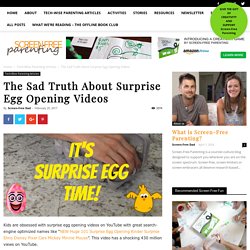 This video has a shocking 430 million views on YouTube. Because I am often out of the loop, I learned about these videos at the pool this summer. I was talking to a mom when her young child walked over and asked if they could go home so he could watch “egg bideos.” She explained the craze to me. The videos contain freshly manicured fingernails opening plastic eggs and revealing the prizes within them. The Dangers of YouTube for Young Children. ChuChu TV, the company responsible for some of the most widely viewed toddler content on YouTube, has a suitably cute origin story. 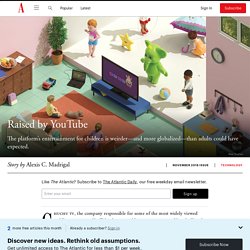 Vinoth Chandar, the CEO, had always played around on YouTube, making Hindu devotionals and little videos of his father, a well-known Indian music producer. But after he and his wife had a baby daughter, whom they nicknamed “Chu Chu,” he realized he had a new audience—of one. He drew a Chu Chu–like character in Flash, the animation program, and then created a short video of the girl dancing to the popular and decidedly unwoke Indian nursery rhyme “Chubby Cheeks.” (“Curly hair, very fair / Eyes are blue, lovely too / Teacher’s pet, is that you?”) To hear more feature stories, see our full list or get the Audm iPhone app. Is Youtube Kids de oplossing? Welkom bij De Standaard! 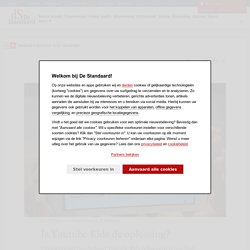 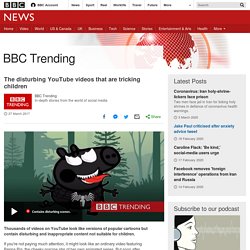 If you're not paying much attention, it might look like an ordinary video featuring Peppa Pig, the cheeky porcine star of her own animated series. But soon after pressing play on this particular YouTube clip, the plot turns dark. A dentist with a huge syringe appears. Peppa's teeth get pulled out. Parent and journalist Laura June almost immediately noticed something was not quite right as her three-year-old daughter was watching it. "Peppa does a lot of screaming and crying and the dentist is just a bit sadistic and it's just way, way off what a three-year-old should watch," June says. Something is wrong on the internet - James Bridle - Medium. [Edit, 21/11/2017: the original video cited here has now been removed as part of YouTube’s recent purge, although many similar videos remain on the platform. 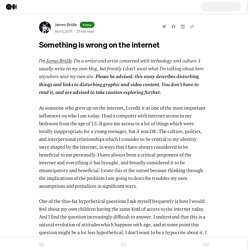 The video used animations from the Grand Theft Auto game series overlaid with cartoon characters assaulting, killing, and burying one another.] This video, BURIED ALIVE Outdoor Playground Finger Family Song Nursery Rhymes Animation Education Learning Video, contains all of the elements we’ve covered above, and takes them to another level. YouTube for Kids is still is still churning out blood, suicide and cannibalism. Simple Fun / WIRED YouTube videos using child-oriented search terms are evading the company's attempts to control them. 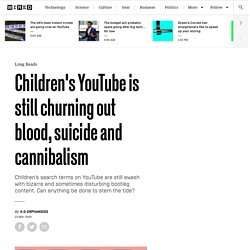 In one cartoon, a woman with a Minnie Mouse head tumbles down an escalator before becoming trapped in its machinery, spurting blood, while her children (baby Mickey and Minnie characters) cry. The cartoon, Minnie Mouse Mommy Has Pregnancy Problem & Doctor Treats Episodes! I watched 1,000 hours of YouTube Kids’ content and this is what happened… – TechCrunch. The multicolored slurry of user generated content that for years has been successfully netting millions of kids’ eyeballs on YouTube by remixing popular cartoon characters to crudely act out keyword search scenarios leered into wider public view this week, after writer James Bridle penned a scathing Medium post arguing the content represents “a kind of violence inherent in the combination of digital systems and capitalist incentives”. 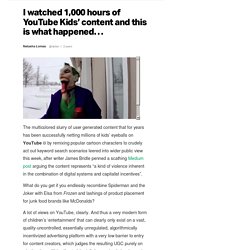 What do you get if you endlessly recombine Spiderman and the Joker with Elsa from Frozen and lashings of product placement for junk food brands like McDonalds? A lot of views on YouTube, clearly. This is effectively — if not yet literally — media programming by SEO-optimized robots. And, as Marshall McLuhan wrote in 1964, the medium is the message. … because it is the medium that shapes and controls the scale and form of human association and action. It’s a literal pantomime of the stuff kids might think to search for. (9) The nightmare videos of childrens' YouTube — and what's wrong with the internet today.