Something is wrong on the internet – James Bridle 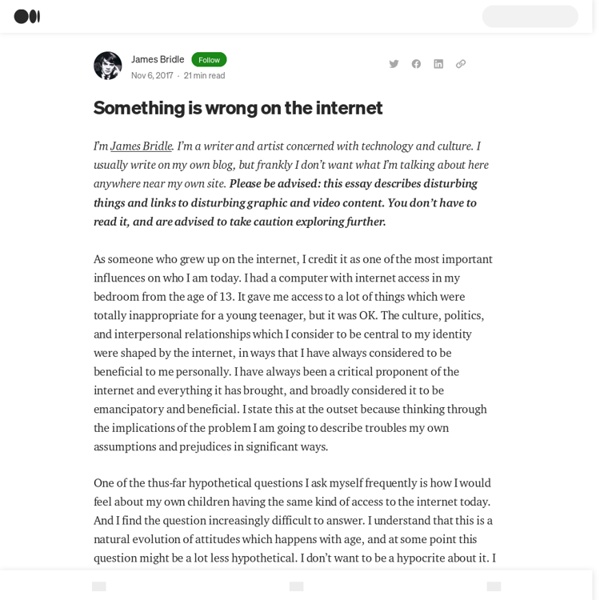 [Edit, 21/11/2017: the original video cited here has now been removed as part of YouTube’s recent purge, although many similar videos remain on the platform. The video used animations from the Grand Theft Auto game series overlaid with cartoon characters assaulting, killing, and burying one another.] This video, BURIED ALIVE Outdoor Playground Finger Family Song Nursery Rhymes Animation Education Learning Video, contains all of the elements we’ve covered above, and takes them to another level. Familiar characters, nursery tropes, keyword salad, full automation, violence, and the very stuff of kids’ worst dreams. And of course there are vast, vast numbers of these videos. Channel after channel after channel of similar content, churned out at the rate of hundreds of new videos every week. For the final time: There is more violent and more sexual content like this available. To expose children to this content is abuse. This, I think, is my point: The system is complicit in the abuse.

Imagined minorities: rethinking race and its appeal in Malaysia Despite the game-changing outcome of the 14th General Election, the spectre of race lingers in Malaysia. Appointing an ethnic Indian and Christian Tommy Thomas as the Attorney General has already attracted some predictable flak. When Hindu Rights Action Force 2.0 (Hindraf 2.0, a Hindraf splinter group) demanded that MARA University of Technology (UiTM) be opened to entry by all races, an online petition was immediately kickstarted and has collected more than 150,000 signatures in the first two days.

The Question of Cultural Appropriation The trouble with Elvis’s version of “Hound Dog” is not that it is bad. It’s that it doesn’t make any goddamn sense. Big Mama Thornton’s original 1952 version of the song is sleazy and defiant. In a bluesy growl, she tells off the low-down guy who keeps “snooping round her door.” It’s a declaration of independence by a woman who is sick and tired of having a “hound dog” of a man take her for granted. Languages Of The World [This post was originally published in February 2012] As discussed in earlier posts, abstract concepts such as personality or happiness can be mapped. A few years ago, geographers from Kansas State University tried to map the spatial distribution of another such abstract notion, that of evil. The Web We Have to Save – Matter It had all started with 9/11. I was in Toronto, and my father had just arrived from Tehran for a visit. We were having breakfast when the second plane hit the World Trade Center. I was puzzled and confused and, looking for insights and explanations, I came across blogs. Once I read a few, I thought: This is it, I should start one, and encourage all Iranians to start blogging as well.

The Top Art Projects Applying Blockchain  Blockchain distributed ledger technology seems to be very useful for the arts industry, it can help solve the main problem of the sphere – intellectual property registration. It is very easy – the system helps claim property rights to the pieces of arts that are very difficult to forge. Perhaps, that’s why 2015 was rich with art projects applying Bitcoin and the Blockchain. Let’s shed some light on the top art projects applying blockchain. How tech's richest plan to save themselves after the apocalypse Last year, I got invited to a super-deluxe private resort to deliver a keynote speech to what I assumed would be a hundred or so investment bankers. It was by far the largest fee I had ever been offered for a talk – about half my annual professor’s salary – all to deliver some insight on the subject of “the future of technology”. I’ve never liked talking about the future. The Q&A sessions always end up more like parlor games, where I’m asked to opine on the latest technology buzzwords as if they were ticker symbols for potential investments: blockchain, 3D printing, Crispr.

Should a self-driving car kill the baby or the grandma? Depends on where you’re from. In 2014 researchers at the MIT Media Lab designed an experiment called Moral Machine. The idea was to create a game-like platform that would crowdsource people’s decisions on how self-driving cars should prioritize lives in different variations of the “trolley problem.” In the process, the data generated would provide insight into the collective ethical priorities of different cultures. The researchers never predicted the experiment’s viral reception. Four years after the platform went live, millions of people in 233 countries and territories have logged 40 million decisions, making it one of the largest studies ever done on global moral preferences.