Greek-Orthodox churches in Australia live-stream liturgies on Facebook. For the first time in modern history, Greek Orthodox church-goers will be ‘attending’ the liturgy via social media. 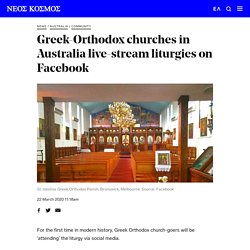 The congregation will no longer… congregate amidst coronavirus fears, taking the holy worship online. Following Archbishop Makarios’ announcement that public worship is suspended indefinitely, the churches of Australia decided to take to Facebook Live to continue providing their faithful with a much needed faith boost. “What we must emphasise is that according to scientists, the transmission of the virus occurs when we are in close contact with a person who is infected. - Archbishop Fisher considering drive-by confessions. 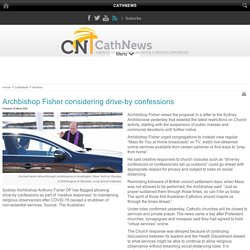 Source: The Australian. Archbishop Fisher raised the proposal in a letter to the Sydney Archdiocese yesterday that detailed the latest restrictions on Church activity, starting with the suspension of public masses and communal devotions until further notice. Sacrament of Reconciliation - Sacraments in Catholic Church - CCEA - GCSE Religious Studies Revision - CCEA - BBC Bitesize. COVID-19 denies Eucharist to Catholics Holy Thursday, the day of its origin - Catholic Voice. For most Catholics, Holy Thursday 2020 will be a Eucharist-free one. 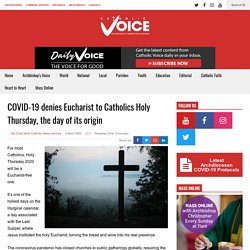 It’s one of the holiest days on the liturgical calendar, a day associated with the Last Supper, where Jesus instituted the holy Eucharist, turning the bread and wine into his real presence. The coronavirus pandemic has closed churches to public gatherings globally, requiring the faithful to participate in Mass online or by watching television throughout the 2020 Holy Week and separating most Catholics from holy Communion. Catholics have shared memes all over social media saying they have sacrificed more than they ever have throughout Lent 2020 amid the coronavirus, but the notion of going without the Eucharist on Holy Thursday seems particularly painful to many. “I feel a little lost,” said Sara Chambers, a parishioner at St. Gay conversion therapy is happening in secret in Australia, report finds - Hack - triple j. After he had gay sex for the first time, church leaders asked Benson to renounce Baal (an Old Testament god of the Phoenicians) and exorcise the spirit of sodomy. 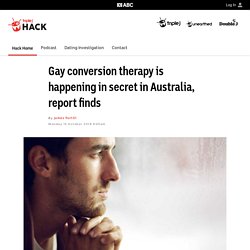 They made the 17-year-old delete his queer contacts. They drew a cross on his phone with consecrated oil. This was at a large evangelical-style modern-looking church near Melbourne in 2006. "The devil won't have a chance with you now," they told Benson. New conversion therapy laws, harm to LGBT vs freedom of speech - Eternity News. Three attempts at legislation to ban “conversion therapy” are in process in Victoria, Queensland and the ACT. 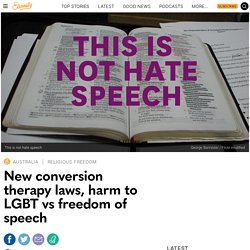 While Queensland’s draft bill has struck trouble in a parliamentary committee, Victoria’s Premier, Daniel Andrews, has promised to “drag these practices from the dark ages and into the brightest of lights”. SOGICE Survivor Statement v2 Nov 2019. SOGICE Survivor Statement v2 Nov 2019. The Lies and Dangers of "Conversion Therapy" Organizational Positions on Reparative Therapy Declaration on the Impropriety and Dangers of Sexual Orientation and Gender Identity Change Efforts We, as national organizations representing millions of licensed medical and mental health care professionals, educators, and advocates, come together to express our professional and scientific consensus on the impropriety, inefficacy, and detriments of practices that seek to change a person’s sexual orientation or gender identity, commonly referred to as “conversion therapy.” 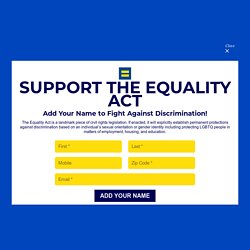 We stand firmly together in support of legislative and policy efforts to curtail the unscientific and dangerous practice of sexual orientation and gender identity change efforts. American Academy of Child Adolescent Psychiatry American Academy of Pediatrics "Confusion about sexual orientation is not unusual during adolescence. American Association for Marriage and Family Therapy. The Lies and Dangers of "Conversion Therapy"

About Conversion Therapy – The Trevor Project. What is “conversion therapy?” 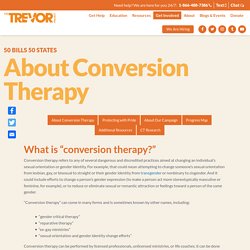 Conversion therapy refers to any of several dangerous and discredited practices aimed at changing an individual’s sexual orientation or gender identity. For example, that could mean attempting to change someone’s sexual orientation from lesbian, gay, or bisexual to straight or their gender identity from transgender or nonbinary to cisgender. And it could include efforts to change a person’s gender expression (to make a person act more stereotypically masculine or feminine, for example), or to reduce or eliminate sexual or romantic attraction or feelings toward a person of the same gender. Conversion Therapy. What is conversion therapy? 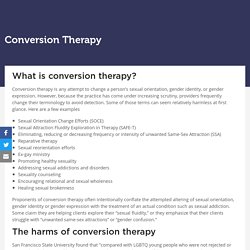 Conversion therapy is any attempt to change a person’s sexual orientation, gender identity, or gender expression. However, because the practice has come under increasing scrutiny, providers frequently change their terminology to avoid detection. Some of those terms can seem relatively harmless at first glance. Here are a few examples. Conversion Therapy. The Lies and Dangers of "Conversion Therapy" Queensland religious groups fight move to make gay conversion therapy a crime. Religious schools and organisations are fighting a move by the Queensland government to make LGBT-related conversion therapy a crime in the state. 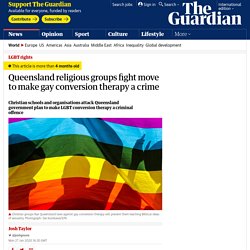 In late November, the Queensland government introduced legislation that would, among other amendments to health legislation, make the practice of conversion therapy to change or suppress a person’s sexual orientation or gender identity punishable by up to 18 months in jail. The examples provided in the legislation include aversion therapy, psychoanalysis or hypnotherapy with the aim of changing or suppressing a person’s sexuality, but it also extends to counselling and group activities. The legislation – which followed a 2018 Human Rights Law Centre review into conversion therapy practices in Australia – has the strong support of medical bodies, such as the Australian Psychological Society, and human rights organisations, such as the Queensland Human Rights Commission. 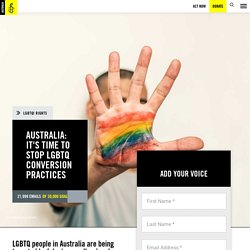 The messaging and resulting activities used as part of conversion practices and ideologies are hurting people and making them feel guilty for being who they are. Young people are often the target of these harmful practices. LGBTQ young people are more likely to experience mental health issues and these practices and ideologies cause more harm at a time that young people should be receiving support, education and understanding, not being exposed to ideologies that shame and scare them. In Victoria, the Government has taken action against groups performing conversion practices. Some Christian groups still promote 'gay conversion therapy' – but their influence is waning. The idea that to be gay is to be sick and in need of a cure might seem archaic and bizarre by mainstream standards, but among a few fundamentalist Christian groups, it lives on today. Recently, one such group, the Core Issues Trust, booked a cinema in London’s West End for a film screening event which advocated conversion from homosexuality.

The film, Voices of the Silenced, promotes the idea that people can be “rescued” from homosexual impulses and practices, and was also supported by representatives from Christian Concern. After an outcry, the screening was ultimately cancelled by the cinema, where the group staged a public protest on February 8. Gay Conversion Therapy in Australia - REPORT - ABBI. ‘I have been through conversion therapy including help from pastors, counsellors and Christian acquaintances, I have been at this attempt to change for 14 years.

It may seem like LGBT people and conservative Christians inhabit two different worlds. But with 40% of same sex couples in Australia identifying as Christian, LGBT people are likely to be a significant, if covert, presence in conservative Christian churches. Views about homosexuality among pentecostals in the Evangelical Tradition - Religion in America: U.S. Religious Data, Demographics and Statistics. Church of England. The development of Anglican thinking on sexuality can be most helpfully found in Some Issues in Human Sexuality - a guide to the debate - commended by the House of Bishops in 2003. Homosexuality Some issues in Human Sexuality (Section 1.3) outlines the growth of the debate about the traditional teaching on homosexual activity from the 1950's onwards. In the 1950s the Church of England's Moral Welfare Council was one of the major influences that led to the setting up of the Wolfenden Commission, supporting its recommendation to abolish the law against male homosexual activity and to set the age of homosexual consent at 21, which became law in 1967.

Three reports on homosexuality were produced by the Church of England working parties between 1970 and 1989, each of them contributions to the debate. The mind of the Church has been expressed formally on two occasions. Catechism of the Catholic Church - The sixth commandment. You shall not commit adultery.113 You have heard that it was said, "You shall not commit adultery. " But I say to you that every one who looks at a woman lustfully has already committed adultery with her in his heart.114 "God created man in his own image . . . male and female he created them";116 He blessed them and said, "Be fruitful and multiply";117 "When God created man, he made him in the likeness of God. Veritatis splendor. Homosexuality and the Anglican Communion. Catholic teaching on homosexuality. Catholic teaching on homosexuality is laid out in the Catechism of the Catholic Church and a number of magisterial documents. The Church teaches that while homosexual sexual acts, like all sexual acts outside of marriage, are sinful, having a homosexual orientation itself is not a sin.

It also teaches that LGBT people, like all people, are to be treated with respect.

Overview of Religion in Australia