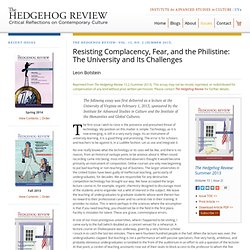 This essay may not be resold, reprinted, or redistributed for compensation of any kind without prior written permission. Please contact The Hedgehog Review for further details. The following essay was first delivered as a lecture at the University of Virginia on February 1, 2013, sponsored by the Institute for Advanced Studies in Culture and the Institute of the Humanities and Global Cultures.

The first issue I wish to raise is the presence and presumed threat of technology. No one really knows what the technology or its uses will be like, and there is no reason, from an historical vantage point, to be anxious about it. How state budgets are breaking US schools - Bill Gates.

Bill Gates criticism. The teacher vs. the billionaire. Deasy, Apple, Pearson, and Gates: A Post Worth Hacking Into. Thirty million dollars is the iceberg tip for what the Los Angeles Unified School District (LAUSD) under the direction of reform-minded, unaccredited Broad Superintendents Academy graduate John Deasy decided to shell out in June in the name of supporting Common Core. 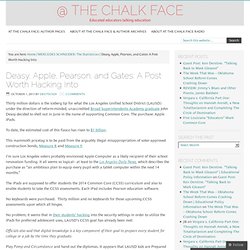 The purchase: Apple iPads. To date, the estimated cost of this fiasco has risen to $1 billion. This mammoth pricetag is to be paid from the arguably illegal misappropriation of voter-approved construction bonds, Measure R and Measure Y. I’m sure Los Angeles voters probably envisioned Apple Computer as a likely recipient of their school renovation funding. It all seems so logical– at least to the Los Angeles Daily News, which describes the purchase as “an ambitious plan to equip every pupil with a tablet computer within the next 14 months.” What Superheroes can tell us about Principals – George W. Bush Presidential Center. Seven Sins of Our System of Forced Education. In my last post I took a step that, I must admit, made me feel uncomfortable. 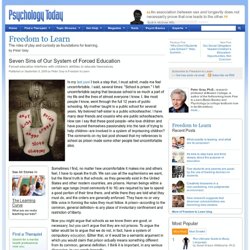 Why kids hate school — subject by subject - The Answer Sheet. A little while ago I published a post by cognitive scientist Roger C. 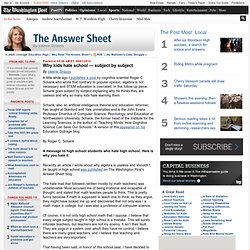 Schank who wrote that contrary to popular opinion, algebra is not necessary and STEM education is overrated. In this follow-up piece, Schank goes subject by subject explaining why he thinks they are useless and why so many kids hate learning them. The 5 Most Overhyped Trends in Education « Looking Up. For your perusal, a completely subjective list of five things happening right now in education that are getting lots of notice, energy and resources but don’t deserve it, and why I think we need to reconsider our collective love affair with them: 1. 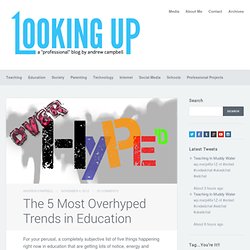 Flipping The Class: What is it? “…a form of blended Learning which encompasses any use of Internet technology to leverage the learning in a classroom, so a teacher can spend more time interacting with students instead of lecturing. This is most commonly being done using teacher created videos that students view outside of class time. Five Reasons Why Teaching Is Still Great. Los Angeles school police still ticketing thousands of young students. Even as Los Angeles authorities continue efforts to reform school-discipline standards, fresh data show that police from the city’s biggest school district are continuing to ticket thousands of young students, especially minorities, at disproportionate rates that critics charge are putting them on a track for dropping out. 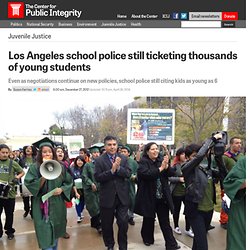 Citation rates for this year are little changed from 2011 data. Disclosure of the 2011 data this past spring led to federal civil-rights scrutiny and promises that policies at the Los Angeles Unified School District would be reviewed, and likely changed. In 2011, children 14 or younger in the school district, the area’s biggest, were issued 43 percent of the nearly 10,200 tickets school police handed out to students for fighting, daytime-curfew violations and other minor infractions — indiscretions that community groups and judges have maintained might better be handled by school officials or referred directly to community-based counseling.

Knowledge of right and wrong? New data shows school “reformers” are full of it. The Inconvenient Truth Of Education “Reform” Events in the past week showed how market-driven education policies, deceivingly labeled as “reform,” are revealing their truly destructive effects on the streets and in the corridors of government. 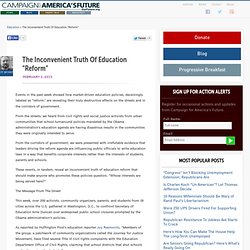 From the streets, we heard from civil rights and social justice activists from urban communities that school turnaround policies mandated by the Obama administration’s education agenda are having disastrous results in the communities they were originally intended to serve. From the corridors of government, we were presented with irrefutable evidence that leaders driving the reform agenda are influencing public officials to write education laws in a way that benefits corporate interests rather than the interests of students, parents and schools. These events, in tandem, reveal an inconvenient truth of education reform that should make anyone who promotes these policies question, “Whose interests are being served here?”

My Year Volunteering As A Teacher Helped Educate A New Generation Of Underprivileged Kids vs. Can We Please, Just Once, Have A Real Teacher. Point When I graduated college last year, I was certain I wanted to make a real difference in the world. After 17 years of education, I felt an obligation to share my knowledge and skills with those who needed it most. After this past year, I believe I did just that. Why Kids Should Learn Cursive (and Math Facts, and Word Roots) When Suzanne Kail, an English teacher at a public high school in Magnolia, Ohio, was told that she would be required to teach her students Latin and Greek word roots, she groaned and rolled her eyes. 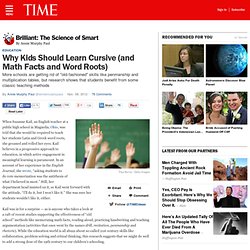 I have written much on this blog about problems with the use of Value-added Estimates of teacher effect (used loosely) on student test score gains on this blog. 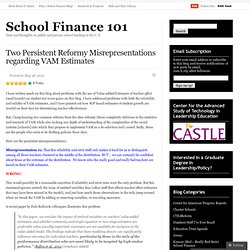 I have addressed problems with both the reliability and validity of VAM estimates, and I have pointed out how SGP based estimates of student growth are invalid on their face for determining teacher effectiveness. But, I keep hearing two common refrains from the uber-reformy (those completely oblivious to the statistics and research of VAM while also lacking any depth of understanding of the complexities of the social systems [schools] into which they propose to implement VAM as a de-selection tool) crowd. Sadly, these are the people who seem to be drafting policies these days. New school year: doubling down on failed ed policy - The Answer Sheet. This was written by Lisa Guisbond, a policy analyst for the National Center for Fair and Open Testing, known as FairTest, a Boston-based organization that aims to improve standardized testing practices and evaluations of students, teachers and schools. 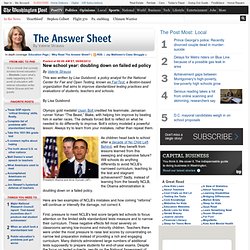 By Lisa Guisbond Olympic gold medalist Usain Bolt credited his teammate, Jamaican runner Yohan “The Beast,” Blake, with helping him improve by beating him in earlier races. The defeats forced Bolt to reflect on what he needed to do differently to improve. Undisciplined by Heather Mac Donald, City Journal Summer 2012. The Obama administration undermines classroom order in pursuit of phantom racism. In March 2010, Secretary of Education Arne Duncan announced that his department was “going to reinvigorate civil rights enforcement.” The secretary was speaking on the 45th anniversary of “Bloody Sunday,” when state troopers savagely beat and teargassed peaceful voting-rights marchers in Selma, Alabama. Duncan fleetingly acknowledged the racial progress that the nation had made since that shameful era, but he was soon back in the 1960s: “Skeptics sometimes tell me, ‘Slow down.’

They say our agenda to pursue equal opportunity is too ambitious. Why schools used to be better. 10 Things in School That Should Be Obsolete. Do Our Public Schools Threaten National Security? by Diane Ravitch. Starving the Future. Emerging economic powers China and India are heavily investing in educating the world’s future workers while we squabble about punishing teachers and coddling children. This week, the Center for American Progress and the Center for the Next Generation released a report entitled “The Race That Really Matters: Comparing U.S., Chinese and Indian Investments in the Next Generation Workforce.” A Wealth of Words by E. D. Hirsch, Jr., City Journal WInter 2013.

A warning to college profs from a high school teacher. For Poor Schoolchildren, a Poverty of Words. Poor Students Struggle as Class Plays a Greater Role in Success. The California Department of Education says you have a right to a bad education. Click to enlarge. Dollars Over Decency: School Kids Without Money Have Lunch Taken Away And Thrown Out.

Education is Not the Cure for High Unemployment or for Income Inequality. What can be done to improve struggling high schools? (Cullen, Levitt, Robertson, Sadoff) Brookings: Hidden Supply of High-Achieving, Low Income Students. Summer Reading and the Rich/Poor Achievement Gap. Schools sending students off on summer vacation and public libraries gearing up to get kids excited about summer reading programs are both in the business of making sure children become fluent, engaged readers.

Unfortunately, the results of those efforts aren’t necessarily equal for kids in lower-income situations. Richard L. Allington, co-author of Summer Reading: Closing the Rich/Poor Achievement Gap (Teachers College and International Reading Association, 2013) talks about the reasons for that disparity and offers research-based suggestions for solving the problem, with particular ideas for librarians. Special Report: Class Struggle - How charter schools get students they want.

No Rich Child Left Behind. Javier Jaén. Does Expanding School Choice Increase Segregation? New York’s graduation gap widens. At Some Schools, Achievement Lags Behind Opportunity. The Education Reform Dichotomy: Big Choices Ahead - Living in Dialogue. College Board Places 857 Desks on the National Mall. How to Destroy Education While Making a Trillion Dollars. Corruption in textbook-adoption proceedings: 'Judging Books by Their Covers'

Testing. Homework. The Resurgence of Ability Grouping and Persistence of Tracking. STEM. Learning by Choice: Play, Sports and A La Carte « Learning Is For Everyone -LI4E. PlayMaker School. Organizing Instruction and Study to Improve Student Learning. The Soldiers & the Schoolteachers: An Unlikely Coalition Committed to Liberating Genius in America. Who Produces the Ed Research in the Media? BuildThatBill. The Coming Revolution in Public Education. Brookings K-12 Education. The 2010 Brown Center Report on American Education. The education revolution weve been waiting for - bookforum.com / omnivore. Back to School. What Is Education For? My view: Better teachers, equipment won't improve schools as long as students avoid work. Are Lazy Students the Real Problem in Public Education? - Education. School as Wonder, or Way Out. Education is the Oil that will drive the Information Revolution.

Why Schools Don't Educate J T Gatto. Why American Education Fails. Bell hooks on education. The Great Stagnation of American Education. A Brief History of Anti-Intellectualism in American Media. Noam Chomsky - The Purpose of Education. Riesman model of Education and Culture. History, Who Needs It? What Are You Going to Do With That? - The Chronicle Review. On the Uses of a Liberal Education. The War Against Teachers as Public Intellectuals in Dark Times. When Schools Become Dead Zones of the Imagination: A Critical Pedagogy Manifesto.

The One Room Schoolhouse Goes High Tech. Prisoners of Time: Report of the National Education Commission on Time and Learning. When big data is bad data. Why we can’t threaten our way to better schools. Why Do We Still Have Summer Vacation? - Is this the educational equivalent of “Moneyball?”