Evernote in Edu #1. How to Create a Portfolio with Evernote (Education Series) Bio Rob is a teacher at Trillium Charter School in Portland, where he primarily instructs students aged 8-11. 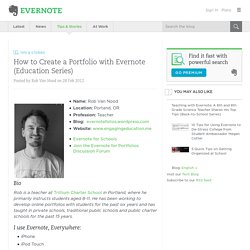 He has been working to develop online portfolios with students for the past six years and has taught in private schools, traditional public schools and public charter schools for the past 15 years. I use Evernote, Everywhere: iPhoneiPod TouchiPadMacWindows E-Portfolios: a student’s project warehouse and progress tracker I started teaching 15 years ago and that is when I first came across this concept of a ‘portfolio.’ Initially, I had my students create paper portfolios. We had a bin where we’d put these documents and at the end of the year, they’d have 10-20 pieces that they’d take with them into the next school year. DOWNLOAD How To Use Evernote: The Missing Manual. Table Of Contents §1 – What Is Evernote? 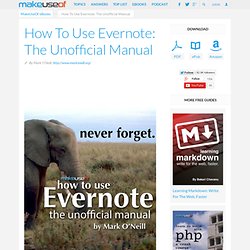 §2 – An Overview Of The Desktop App §3 – An Overview Of The Smartphone Apps §4 – Tips, Tricks & Hacks §5 – Evernote Add-Ons / Plugins §6 – Conclusion 1. Why do you want to use Evernote? I see so many advantages to Evernote and we will explore some of them in depth later. As information becomes more plentiful, we are bombarded with relentless forms of media 24/7, such as blog posts, videos and photos.

Your brain, amidst all this mess and disorder, just can’t keep up with what it has to remember. Here is a brief rundown of the features that could make your digital life a lot easier, and how to use Evernote to do just that. Find Anything, Anytime, Anywhere Evernote has its own OCR (Optical Character Recognition) service which means that it can read text, whether it’s computer keyboard text, text in a PDF document, a photocopy of some text (say a page of a book) or even text in a photograph.

Evernote provides all users with their own unique email address. Evernote for Education. Android App: I use the desktop version at home and the office, the Android app on my HTC One smartphone, my tablets, web version on my Chromebook. 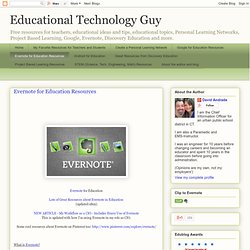 The desktop version sync's all of the data to your computer (good for backup) and you can also export your notes in a variety of formats for backup. You can create new notes via desktop, web, or mobile version. Watch our videos to learn more about using Evernote. September 2012: Your Virtual Blue Binder. As a student, when going back to school in September, there was no event I waited for more than shopping for school supplies. 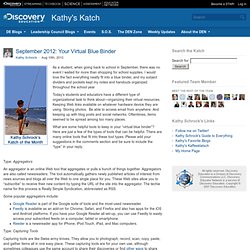 I would love the fact everything neatly fit into a blue binder, and my subject dividers and pockets kept my notes and handouts organized throughout the school year Today’s students and educators have a different type of organizational task to think about—organizing their virtual resources. Keeping Web links available on whatever hardware device they are using. Storing photos. Be able to access email from anywhere. What are some helpful tools to keep in your “virtual blue binder”? Type: Aggregators An aggregator is an online Web tool that aggregates or pulls a bunch of things together. Some popular aggregators include: Google Reader is part of the Google suite of tools and the most-used newsreader.Feedly is available as an add-on for Chrome, Safari, and Firefox and also has apps for the iOS and Android platforms.

How Evernote Works Like Your Memory: An Interview with Maureen Ritchey, Cognitive Neuroscientist. Evernote is designed to work the way your brain does and a few months ago, a neuroscientist named Maureen Ritchey came by our offices to explain exactly why that’s the case. 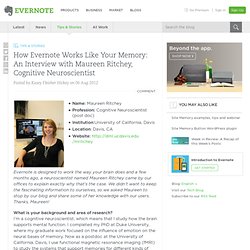 We didn’t want to keep the fascinating information to ourselves, so we asked Maureen to stop by our blog and share some of her knowledge with our users. Thanks, Maureen! What is your background and area of research? I’m a cognitive neuroscientist, which means that I study how the brain supports mental function. I completed my PhD at Duke University, where my graduate work focused on the influence of emotion on the neural bases of memory. How do our brains retrieve memories? Using @Evernoteschools for Lesson Planning. Since I started this Experiment to use Evernote in every aspect of my classroom, I wasn't really sure what I was going to discover. 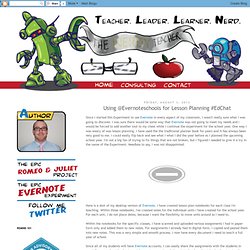 I was sure there would be some way that Evernote was not going to meet my needs and I would be forced to add another tool to my chest while I continue the experiment for the school year. One way I was weary of was lesson planning. I have used the the traditional planner book for years and it has always been very good to me.

9 Evernote Products You Have to Try. You've heard a ton of positive stuff about Evernote, but rather than learn about its seemingly endless functionality, you've left the app sitting lonely and unused in the Productivity folder of your iPad. 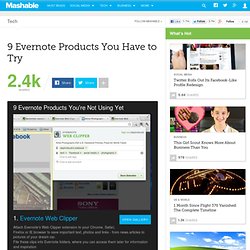