Weather and atmosphere on Earth 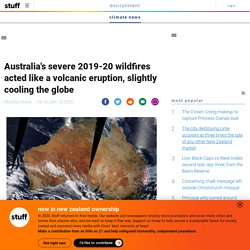 In late 2019 and early 2020, raging wildfires in southeast Australia spawned a rash of rare fire-induced thunderclouds, known as pyrocumulonimbus clouds, or pyroCbs. This pyroCb "super outbreak," as scientists are now calling it, injected plumes of smoke into the stratosphere, a layer of the atmosphere that starts about nine miles overhead. There, the smoke plumes spun up their own winds, creating self-sustaining vortexes that circled the globe, in one case climbing to an unprecedented altitude of more than 32km in the process. Australia's grim climate outlook Australia's climate will continue to warm, resulting in prolonged wildfire seasons and less rain in the southeast and southwest that will lead to more frequent droughts. A global map of wind, weather, and ocean conditions. Date ✕ 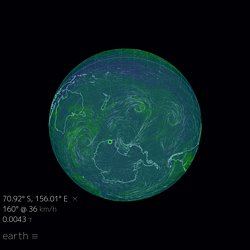 Air aware: air quality experiments for curious kids. On this page: How to catch motes Dust trap Collect dust using a dust trap - a strip of sticky tape on a piece of paper that collects dust from the air - and learn about the science behind it. 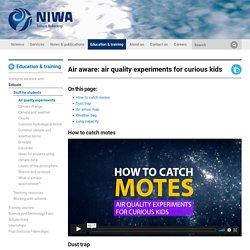 Equipment: FieldbookPapersPensDouble sided cellotapeScissorsBlu Tac Setting the trap: ​Select 3 to 4 locations where you would like to set a trap (example locations: lounge in your house, school car park) Pick out one piece of paper for each location and write down the name of the location, date, time on each piece of paper. On each piece of labelled paper, stick a long strip of double sided sticky tape under the label. How to deploy? NOAA SciJinks. 129 Hurricane Simulation Explore the relationship between sea surface temperatures and... hurricane strength 128 Grow Snow Crystals See how temperature affects the shape of snowflakes. 125 Whirlwind Disaster Save the words from the swirling hurricane!

27 How does a hurricane form? And what does Category 5 mean? 130 Rescue 406 Learn about the NOAA-operated SARSAT system (Search And Rescue... Satellite Aided Tracking). How many people will you be able to rescue 135 Tornado Simulator Adjust the width and pressure difference of a tornado and watch what happens 158 Make lightning with ZAP! Play Spectrix Combine colors to reveal important information about weather. Bringing the Universe to America's Classrooms. Evacuations as flooding hits Dunedin. Residents in Henley on the Taieri are being advised to evacuate as rain continues to fall in Dunedin, but the worst of the weather appears to be over. 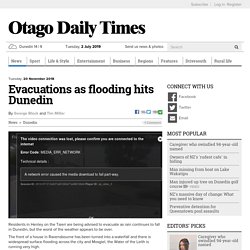 The front of a house in Ravensbourne has been turned into a waterfall and there is widespread surface flooding across the city and Mosgiel, the Water of the Leith is running very high. However, as of 5.45pm a Fire and Emergency New Zealand said it had 10 appliances at flood-related call-outs and it appeared the worst of the weather was over. The Otago Regional Council has opened the Riverside spillway gates on the Taieri River at Outram to divert flooding into a ponding area part of the Taieri Flood Protection Scheme. Both police and NZTA have warned against non-essential travel, with NZTA saying strong winds were also bringing down trees. Flooding closes roads in South ​Houses across West Harbour are without power after a deluge of rain caused flooding across the area this afternoon. Three Mile Hill Rd was now closed. Significant falls.