EVIDENCE EMERGES FROM JANUARY 6th. Throughout the impeachment trial in the Senate, President Trump’s lawyers have refuted the evidence brought forward by the Democrats, and eviscerated their arguments. 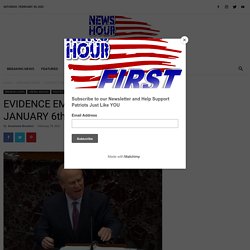 They also brought some evidence of their own. Everyone with even a small bit of knowledge of the Constitution knows that impeachment is meant to convict AND remove a president from office. Donald Trump is no longer president, so it should be obvious to everyone that the impeachment was an unconstitutional waste of time and taxpayer dollars. Please choose a reason below: If that’s not enough, the fact that the Chief Justice of the Supreme Court, John Roberts, refused to take part in the trial should show how unconstitutional it truly was.

Here is BlazeTV‘s Andrew Wilkow explaining that point: Donald Trump’s lawyer, David Schoen, also discussed the unconstitutionality of the trial, the real reasons why the Democrats are pursuing impeachment, and the obvious lie that the trial will help “unify” the country. Rep. Johnson: Dems' 'Ultimate Goal' with Impeachment Was to Frame Trump Supporters. On 15th February 2021 @ 9.00pm © press Rep. 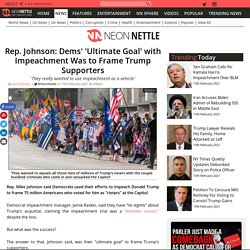 Mike Johnson said Democrats used their efforts to impeach Donald Trump to frame 75 million Americans who voted for him as "rioters" at the Capitol. Democrat impeachment manager, Jamie Raskin, said they have “no regrets” about Trump’s acquittal, claiming the impeachment trial was a “dramatic success" despite the loss. But what was the success? The answer to that, Johnson said, was their “ultimate goal” to frame Trump’s supporters. “They really wanted to use impeachment as a vehicle because they wanted to equate all those tens of millions of Trump’s voters and all of his supporters and everybody who came to the rally, they wanted to equate all of those people with the couple hundred criminals who came in and ransacked the Capitol,” Johnson told Breitbart News. 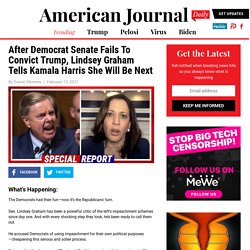 JUST IN: Pelosi Forced To Fess Up. Four Repub­li­can law­mak­ers are demand­ing answers from House Speak­er Nan­cy Pelosi over her role in mak­ing secu­ri­ty deci­sions on Jan­u­ary 6, the day of the Capi­tol riot. 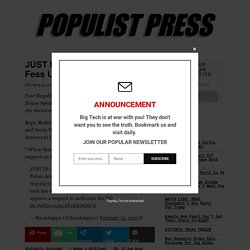 Reps. Rod­ney Davis, IL, Jim Jor­dan, OH, James Com­er, KY, and Devin Nunes, CA sent a let­ter Mon­day, request­ing the answers to the fol­low­ing five questions: * When then-Chief Sund made a request for nation­al guard sup­port on Jan­u­ary 4th, why was that request denied? JUST IN: Repub­li­cans have writ­ten a let­ter to Speak­er Pelosi demand­ing answers as to why she denied a request to acti­vate the NG ahead of Jan. 6, and why it took her over an hour while the attack was on-going to approve a request to autho­rize the NG pic.twitter.com/aTxBaGtD6f— Breaking911 (@Breaking911) Feb­ru­ary 15, 2021. 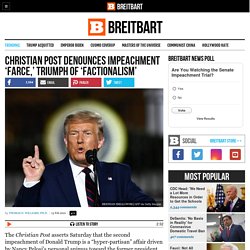 “Chief Roberts will have nothing to do with this farce,” writes Dr. Jerry Newcombe in Saturday’s Christian Post essay. They are Hiding the TRUTH in Their Quest to Go After EVERY Single Trump Supporter. Democrat forces of evil darkness are firmly in control of House, Senate, and administration, including the spooky coordinated information apparatus run by deep state elements of the Federal Bureau of Instigation and Department of Injustice. 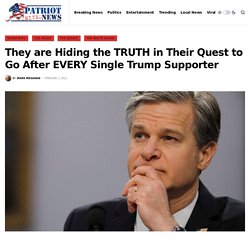 Welcome to the new order of Open Societies globalism, where truth is what the overseers of democracy say it is. No matter who was behind the barbarian invasion of the Capitol Building on January 6, every single “Trump Supporter” is in trouble for it. So what is ‘truth’ anyway? Pontius Pilate wasn’t nearly as evil as history makes him out to be. Certainly not as evil as many consider George Soros to be. He knew the political storm that was brewing and wanted to stay out of it, so like any good politician, he neatly sidestepped. Remove Content Link? By Democrat Standards, Kamala Harris MUST Be Impeached and Locked Up for the Rest of Her Miserable Life. In April of 2018, Kamala Harris appeared on “The Ellen Degeneres Show,” where she joked about killing President Trump and Mike Pence and the audience of liberal women had a good laugh about it. 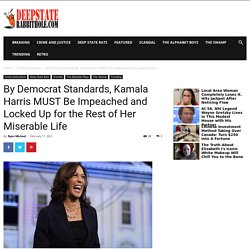 But now they’re claiming Trump “incited violence” on January 6. Kamala Harris cackles with joy at the thought of killing Republicans Ellen asked a question about whether Harris would want to be stuck in an elevator with Donald Trump, Mike Pence or Jeff Sessions: Here are six videos of Democrats calling for violence or physical confrontations that are still active on Twitter. Videos of Democrats during the Trump administration calling for their supporters to confront Republicans physically or warning of “civil unrest” on the streets are still active on Twitter. 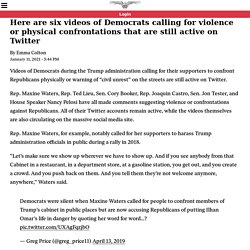 Rep. Maxine Waters, Rep. Ted Lieu, Sen. Cory Booker, Rep. Joaquin Castro, Sen. Scavino Releases Incredible Video For Trump. Joe Biden: 'We All Know We Have to Move On' from Impeachment. President Joe Biden said Thursday that Americans should remember the country would have to “move on” despite the Democrat-led effort to impeach former President Donald Trump. 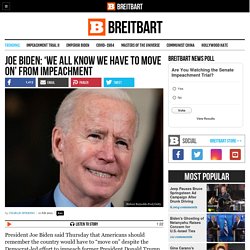 Reporters asked Biden if he had a response to the videos from the Capitol Hill riots played by Democrats during the hearing on Wednesday. “I told you, I’m focused on my job … to deal with the promises I made and we all know we have to move on,” he said. “Today it’s about jobs and infrastructure.” Biden said he had not seen the videos live because he worked until 9:00 p.m. the previous evening but had seen some news coverage of the trial. “I think the Senate has a very important job to complete and I think my guess is some minds may be changed, but I don’t know,” he said. Biden met with Sens. The president emphasized additional infrastructure spending was critical to moving the country forward after the coronavirus pandemic, warning China was threatening to beat the United States.

Tuberville: Democrats Wasting Millions on Impeachment as 'Americans Are Out of Work' On 11th February 2021 @ 7.00pm © press Republican Sen. 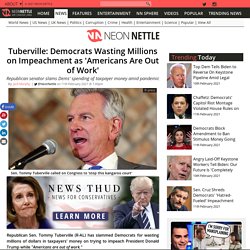 Follow Doug on Parler @TheGilesWay. If you thought that Time story admitting to a highly-coordinated effort to swing the election to help Biden beat Trump was a new development, we have news for you. Dems Throw The Constitution Out The Window Threaten To Punish Trump For Exercising His Rights For Impeachment Trial. Democrats are throwing the Constitution out the window and have threatened to punish President Trump for exercising his rights. Democrats have doubled down that they intend to punish Trump for not testifying at the impeachment trial in the Senate.

In a filing responding tot Trump’s lawyer’s 75 page trial memorandum the House impeachment managers wrote: Impeachment Kabuki May Start With Bombshell, 'Trump's Help Was Rejected Numerous Times', Meadows Said. An unconstitutional mock trial with no judge, to remove former President Donald J. Trump from an office that he does not currently hold is set to begin in Washington DC on Tuesday, under the cover that Trump’s spontaneous comments on January 6th caused the violence that law enforcement knows for a fact was preplanned.

“Help was offered many times, and not just in January but throughout the Summer but the DC Mayor said the President wouldn’t help. President Donald Trump Releases New Statement on Sham Senate Impeachment Trial. Former Vice President Mike Pence is loathed by the Republican grassroots for failing so pitifully to combat voter fraud in last year’s election, so naturally Conservative Inc. organizations are clamoring for Pence to be their corporate-backed superstar. Pence recently announced his employment with the Heritage Foundation, the nominally conservative Washington D.C. swamp think-tank that takes payola from Google to shill for Big Tech. He is following that up by joining the Young America’s Foundation (YAF), the oligarch-funded student front that tried to cancel Michelle Malkin in 2019 for being too conservative.

YAF announced last week that Pence would be joining the organization as their Ronald Reagan Presidential Scholar. Rand Paul: 'Zero' Chance a 'Partisan Farce' Impeachment Hearing Will Convict Trump. House Democrats Threaten to Trash Constitution ‘To Ensure Conviction’ of Trump: Jonathan Turley. Constitutional law professor Jonathan Turley argued that the House planning on using the fact that Trump refused to testify for them can be used against him in his impeachment trial is unconstitutional. The Trump Political Show Trial » Sons of Liberty Media. The Senate trial for now twice-impeached former President Donald Trump is set to begin this week, with little doubt over the outcome. Fmr Trump Campaign Manager Reveals How Trump Can Use Impeachment To Kick-Off 2024 Campaign. Trump Reveals 'Secret Weapon' For Impeachment Trial. OPINIONThis article contains commentary which reflects the author's opinion. Dem Rep. Jeffries Warns Trump Could Engage in 'Race-Baiting' in Impeachment Trial.

Sunday, Rep. Hakeem Jeffries (D-NY) commented on the possible defense of President Donald Trump’s Senate impeachment trial to equate the Jan. 6 riot at the U.S. Capitol to the riots that took place during Black Lives Matter protests. Trump Impeachment Lawyer Reveals Part of Defense Plan, and It Is Brilliant. Trump’s impeachment lawyer Bruce Castor has revealed part of the defense that will be made on behalf of the president and believe me, it’s a doozy and one the Democrats will hate watching on C-Span. They are putting together a video of Democrats egging on the rioters from BLM to antifa and complete with footage from the riots they encouraged.

Pelosi on impeachment trial "If we were not to follow up with this, we might as well remove any penalty from the Constitution of impeachment" Trump impeachment lawyer says he will use videos of Dem rhetoric in defense. Trump's Lawyer Makes Announcement. Bruce Castor, a lawyer representing Donald Trump in his impeachment trial made a firm announcement late Thursday that the former president will not testify to the Senate and also will not be submitting any written statements. Jason Miller on Impeachment Trial "What the Democrats are doing here is they’re pushing forward with a completely unconstitutional case" Hillary Can Still Be Impeached, And the Dems Are About to Accidentally Open Pandora's Box. President Trump will Not Testify for Impeachment Show in DC, Democrats Lose Their Lead Star. Matt Gaetz Volunteers to Resign from His House Seat So He Can Defend Trump in Impeachment Trial. BREAKING: House Impeachment Managers File Brief Ahead Of Trial, Claim Trump ‘Singularly Responsible’ For Capitol Riot.

Democrats Already Threatening to Destroy Trump's New Impeachment Lawyers. Former Impeachment Manager Val Demings calls Trump a "habitual offender" Top Trump Lawyers Leave Defense Team Ahead of Senate Impeachment Trial. Trump Abandoned by Impeachment Defense Team with Only a Week Until Trial. Democrats got bad news on impeachment when this key Senator was rushed to the hospital. After Impeachment Hopes Tank For Democrats - They Unveil Plan B, Calling For Trump To Be Censured. Mitch McConnell Goes a Step Further in His Quest to DESTROY His Reputation. Hillary fumes over Republicans rallying against convicting Trump " all but five GOP senators voted for Trump to get away with it" BREAKING IMPEACHMENT NEWS. BREAKING IMPEACHMENT NEWS. WITCH HUNT: Democrats Move The Goal Posts After Impeachment Loses Steam Among Republicans. Ultimate BETRAYAL McCONNELL SELLS HIS SOUL To The DS, Tries To END TRUMP FOR GOOD.

Democrat Impeachment Of Trump Could Be Falling Apart - Even Democrat Senators Are Starting To Crack, According To Graham. Chief Justice Roberts wants out of the impeachment trial, Dems want Kamala to preside - not satire. Hirono: Goal of Impeachment to Hold Trump Accountable, Stop Him from Ever Seeking Elected Office Again.