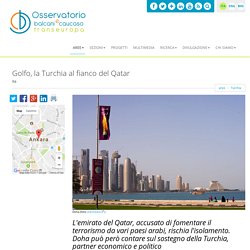 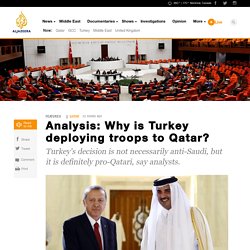 Turkish analysts talking to Al Jazeera interpreted the move as "an apparent show of support for Qatar". "This indeed suggests that Turkey sees its defence ties with Qatar as an indispensable pillar of its strategic posture in the region," Can Kasapoglu, a defence analyst from Turkey's EDAM, told Al Jazeera.

"It also shows that Ankara would not drastically alter its long-term vision for regional fluctuations. " "Turkey has had a base and soldiers in Qatar for a while," Kadir Ustun, the executive director of the SETA Foundation in Washington, DC, explained. U.S. ally Turkey may have a new best friend in Beijing. Want smart analysis of the most important news in your inbox every weekday along with other global reads, interesting ideas and opinions to know? 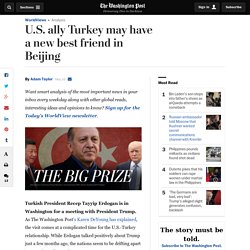 Sign up for the Today's WorldView newsletter. Turkish President Recep Tayyip Erdogan is in Washington for a meeting with President Trump. As The Washington Post's Karen DeYoung has explained, the visit comes at a complicated time for the U.S. -Turkey relationship. While Erdogan talked positively about Trump just a few months ago, the nations seem to be drifting apart in a number of key policy areas. Erdogan looks to strengthen grip with return to AKP helm. Turkish President Recep Tayyip Erdogan makes a speech during the Extraordinary Congress of the ruling Justice and Development Party in Ankara, May 21, 2017. 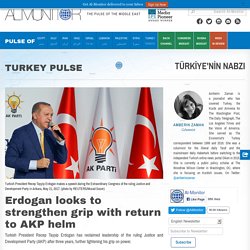 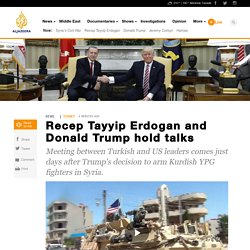 The main two topics on Tuesday's agenda were Trump's decision to send weapons to Syrian Kurdish forces of YPG and Turkey's request for the extradition of Fethullah Gulen, a US-based Muslim leader. Gulen, who lives in Pennsylvania since 1999, is accused by the Turkish government of having planned the failed military coup attempt in 2016. Turkey’s Demands Complicate Battle Plan to Retake Mosul From Islamic State. Turkey 'concerned' by US flags beside terrorist 'rags'

Turkey: Wikipedia blocked for disregarding the law. A NATO without Turkey would be weak: Alliance chief. What will Erdogan Do After the Referendum? Recep Tayyip Erdogan, Turkey’s influential leader. In Turkey, Recep Tayyip Erdogan is known as bizden biri or “one of us.” 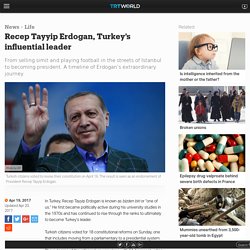 He first became politically active during his university studies in the 1970s and has continued to rise through the ranks to ultimately to become Turkey’s leader. Turkish citizens voted for 18 constitutional reforms on Sunday, one that includes moving from a parliamentary to a presidential system. The outcome of the referendum was close, with 51.4 percent voting in favour of the changes, which his supporters believe endorses Erdogan’s leadership. Here is a look at Erdogan’s journey from Istanbul’s working class Kasimpasa district on the city’s European side to the presidential complex in Ankara. Born on February 26, 1954 to Ahmet and Tenzile Erdogan. 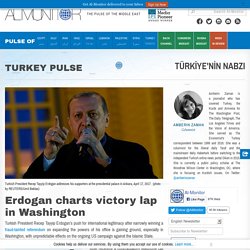 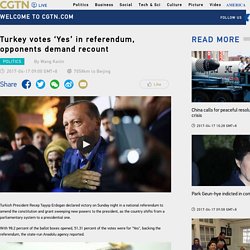 With 98.2 percent of the ballot boxes opened, 51.31 percent of the votes were for "Yes", backing the referendum, the state-run Anadolu agency reported. Turkish president Recep Tayyip Erdogan delivers a speech at the Huber Palace in Istanbul, on April 16, 2017. /CFP Photo Erdogan called Prime Minister Binali Yildirim and the leader of the nationalist MHP party ‍Devlet Bahçeli, which supported the “Yes” vote, to congratulate them, presidential sources said. They quoted Erdogan as saying the referendum result was clear. The country's three largest cities - Istanbul, Ankara and Izmir - all voted "No. " People protest against the results of the referendum in Istanbul, Turkey April 16, 2017.

A supporter celebrates in Istanbul, on April 16, 2017. Problem loading page. Turkey referendum: Key reactions. Image copyright EPA Turkey is divided between those who are celebrating a win in a national referendum, and those demanding a recount. 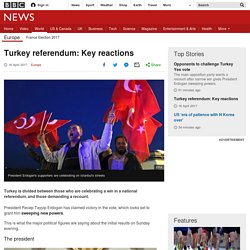 President Recep Tayyip Erdogan has claimed victory in the vote, which looks set to grant him sweeping new powers. This is what the major political figures are saying about the initial results on Sunday evening. The president Media playback is unsupported on your device President Erdogan has claimed victory during a speech in Istanbul. "This constitutional change today is not just an ordinary or simple change. Turkey approves presidential system in tight referendum. Some 51.3 percent of the more than 58 million Turkish voters said “yes” to the ruling Justice and Development Party’s (AKP) constitutional amendment package in a tight race to decide on whether to shift to an executive presidential system. 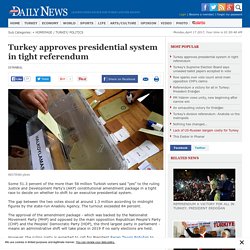 The gap between the two votes stood at around 1.3 million according to midnight figures by the state-run Anadolu Agency. The turnout exceeded 84 percent. The approval of the amendment package - which was backed by the Nationalist Movement Party (MHP) and opposed by the main opposition Republican People’s Party (CHP) and the Peoples’ Democratic Party (HDP), the third largest party in parliament - means an administrative shift will take place in 2019 if no early elections are held.

Turkey referendum: Historic vote on presidential powers under way. Image copyright AFP The Turkish prime minister has claimed victory in the referendum to grant President Recep Tayyip Erdogan new powers, based on unofficial results. Binali Yildirim was speaking as the count neared completion. With about 99% of ballots counted, "Yes" was on about 51.3% and "No" on about 48.7%.

Erdogan supporters say replacing the parliamentary system with an executive presidency would modernise the country. LIVE: Turkey votes on presidential system in key referendum. 12:30 p.m. - Nationalist Movement Party (MHP) leader Devlet Bahçeli cast his vote in Ankara, calling it a significant turning point in the life of the nation. “I’m happy that I carried out my civic duty. Turkish politics will head toward a new structuring regarding the future,” he told journalists. 11:45 a.m. - President Recep Tayyip Erdoğan cast his vote in Istanbul, calling the referendum not an ordinary vote.

“This referendum is not an ordinary voting.