DUMBSTRUCK: a HomeFront Intelligence Report on how America was conned about the DNC hack. Part One: Cozy Bear and Fancy BearTo hear Dmitri Alperovitch tell it, the moment had all the tension of a Hollywood blockbuster: a phone call in the early morning hours, a quick exchange of words, and a sudden, dramatic realization — the Democratic National Committee was under attack. 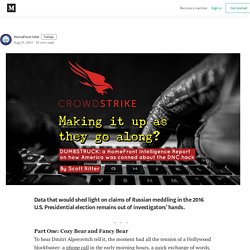 “Are we sure it’s Russia? ,” Alperovitch asked the security analyst on the other end of the line. The analyst, a former intelligence officer trained in the art of cyber warfare, told Alperovitch that there was no doubt. Alperovitch is the 37-year-old chief technical officer of the cyber security company CrowdStrike. CrowdStrike’s proprietary cyber security software, named Falcon Host, a “next generation” endpoint security technology, had been installed on the servers of the Democratic National Committee just the night before, in response to a suspected intrusion. CrowdStrike has a corporate motto: “You don’t have a Malware Problem, You Have an Adversary Problem.” But CrowdStrike had to proceed carefully. Why FBI Can’t Tell All on Trump, Russia. Reporters: Jonathan Z. 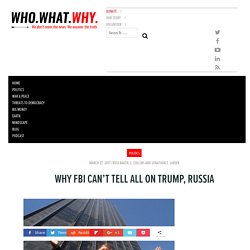 Larsen is the former editor of The Village Voice, whose reporting team included the late Wayne Barrett and Robert I. Friedman. These people and the paper produced many of the important early investigative reports on Donald Trump and on the mob. Larsen is now a senior editor and board member of WhoWhatWhy. Russ Baker, a former investigative reporter for The Village Voice, is Editor-in-Chief of WhoWhatWhy. UPDATES: Please see the following for more on this ever-unfolding mystery: More About Felix Sater — The Problematical Friend Trump Forgot (4/5/2017) Government Must Tell if Trump Associate Had Russian Mob Ties (4/27/2017) Listen to a behind-the-scenes interview on this exclusive Trump-Russia-FBI story — a conversation with Russ Baker and Jonathan Larsen on Radio WhoWhatWhy. The Federal Bureau of Investigation cannot tell us what we need to know about Donald Trump’s contacts with Russia. Photo credit: FBI “I Can’t Go into Those Details Here” A Stunning Discovery Why? 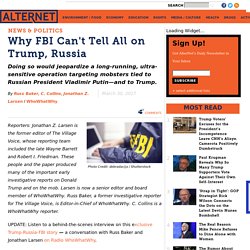 Larsen is the former editor of The Village Voice, whose reporting team included the late Wayne Barrett and Robert I. Friedman. Guccifer2.0 - Game Over. Fmr US Ambassador to UN: Russia Hacks Could be 'False Flag Operation' By Obama Admin. All accusations against Russia aside, hacks of the dominant political parties this election season might have been a false flag operation by the Obama administration, former U.S. 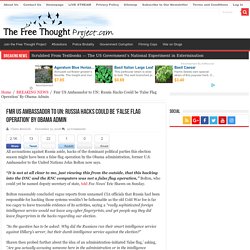 Ambassador to the United Nations John Bolton now says. “It is not at all clear to me, just viewing this from the outside, that this hacking into the DNC and the RNC computers was not a false flag operation,” Bolton, who could yet be named deputy secretary of state, told Fox News’ Eric Shawn on Sunday. Bolton reasonably concluded vague reports from unnamed CIA officials that Russia had been responsible for hacking those systems wouldn’t be fathomable as the old Cold War foe is far too cagey to leave traceable evidence of its activities, saying a “really sophisticated foreign intelligence service would not leave any cyber fingerprints, and yet people say they did leave fingerprints in the hacks regarding our election. “We just don’t know,” Bolton replied a bit hazily. Podesta Group Hired By Russia's Largest Bank to Lobby For Ending Sanctions.

(ZeroHedge) Russia’s largest bank, Sberbank, has confirmed that it hired the consultancy of Tony Podesta, the elder brother of John Podesta who chaired Hillary Clinton’s presidential campaign, for lobbying its interests in the United States and proactively seeking the removal of various Obama-era sanctions, the press service of the Russian institution told TASS on Thursday. 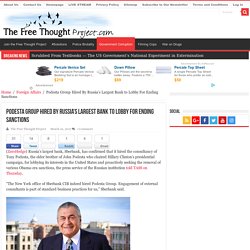 “The New York office of Sberbank CIB indeed hired Podesta Group. Engagement of external consultants is part of standard business practices for us,” Sberbank said. Previously, The Daily Caller reported that Tony Podesta was proactively lobbying for cancellation of a range of anti-Russian sanctions against the banking sector. In particular, he represented interests of Sberbank and was paid $170,000 for his efforts over a six-month period last year to seek to end one of the Obama administration’s economic sanctions against that country.