8-year-old girl among three bystanders wounded in NYC shooting. Three innocent bystanders, including an 8-year-old girl and her father, were wounded when a gunman opened fire during an argument outside a Harlem supermarket on Saturday night, according to police. 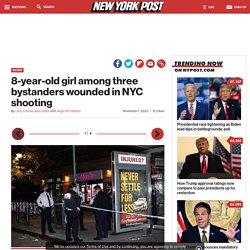 The shooting took place shortly after 7 p.m. outside the Fine Fare at 130 Lenox Ave., police said. “I was busy with customers when I heard the gun,” Reda Khater, 36, who was working at a halal food truck across the street, told The Post.

Mayor Jenny Durkan issued an executive order for protesters to vacate the area, and police said they were in the area Wednesday to enforce the order. The decision to clear the area, first known as the Capitol Hill Autonomous Zone or CHAZ, then the Capitol Hill Occupied Protest or CHOP, comes after a string of violence in the area. Business Owners LIVID, Fight Back Against City Officials - NEWS HOUR FIRST. Business owners will continue to leave. 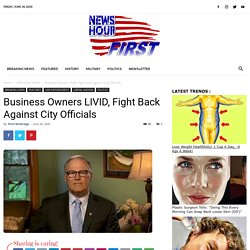 Like police, if local government doesn’t support them, these entities will vote with their feet. The lawsuit may be nothing more than drawing attention to where it needs to be. City officials are all bark and no bite. Trump will send in federalized national guard in the area but he needs to be invited first. Democratic states don’t want his help. Rapper Lord Jamar is 'no Black Lives Matter supporter' - www.independentsentinel.com. Rapper Lord Jamar doesn’t agree with the Black Lives Matter movement and said so in a video posted to Twitter by music account SCUM. 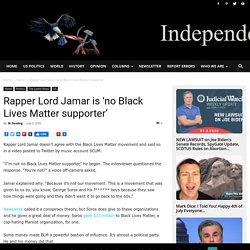 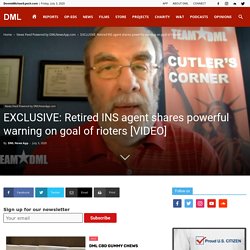 Cutler said people who want to destroy the study of history want to destroy the whole sense of how America evolved into a free country. “How many people suffered to create America, fighting against Nazism and fascism, and yet you have kids out there demonstrating for fascism.” He argued that the rioters are not actually liberals, and said the real definition of a liberal, according to the dictionary, is someone who accepts the idea that other people have other ideas and other ways of seeing things, and you learn to be respectful of people you disagree with.

“These folks don’t agree with freedom of freedom of speech. Juan says Trump "takes a few instances of looting…and blows it up," Gutfield fires back. Greg Gutfield got heated after Juan Williams blamed President Trump for inner-city violence. 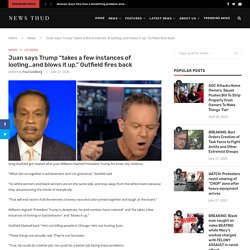 “What ties us together is achievement and not grievance,” Gutfeld said. “So white winners and black winners are on the same side, and stay away from the white losers because they are poisoning the minds of everybody. Gettysburg officials say they're aware of social media rumors of a flag burning at National Park July 4. Borough and regional police departments, as well as National Military Park rangers, say they are monitoring the situation and will take appropriate safety measures GETTYSBURG, Pa. — Law enforcement and regional public safety agencies in the Gettysburg Borough and the surrounding area said Wednesday they are aware of online posts claiming an American flag burning will take place in the Gettysburg National Cemetery on July 4. 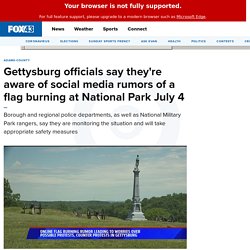 They are also aware of rumors that counter-protestors may show up to 'protect' the flag. "There will be folks here who want to help, or what they envision as help, protect the National Park. Whoops, they do want to blow up Mt. Rushmore after all. “If the Left is going to continue to erase racist history, we cannot stop with statues and flags. 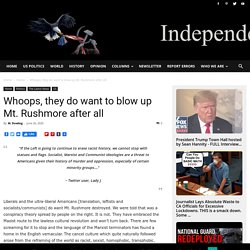 Socialist, Marxist and Communist ideologies are a threat to Americans given their history of murder and oppression, especially of certain minority groups….”~ Twitter user, Lady J Liberals and the ultra-liberal Americans [translation, leftists and socialists/communists] do want Mt. Rushmore destroyed. We were told that was a conspiracy theory spread by people on the right. 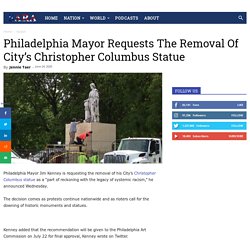 The decision comes as protests continue nationwide and as rioters call for the downing of historic monuments and statues. Kenney added that the recommendation will be given to the Philadelphia Art Commission on July 22 for final approval, Kenney wrote on Twitter. Part of reckoning with the legacy of systemic racism means reconsidering what figures deserve to be commemorated in our public spaces.On July 22, the City will ask the Philadelphia Art Commission to approve the removal of the Christopher Columbus statue. 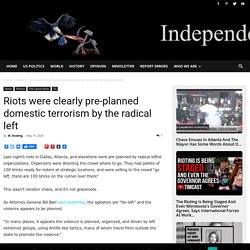 Organizers were directing the crowd where to go. They had pallets of 100 bricks ready for rioters at strategic locations, and were yelling to the crowd “go left, there are 100 bricks on the corner over there” This wasn’t random chaos, and it’s not grassroots. As Attorney General Bill Barr said yesterday, the agitators are “far-left” and the violence appears to be planned. WATCH: Omar says some protestors "felt terrorized by the presence of tanks," rips Trump. Pitchfork Wielding Protesters Infiltrate Celebrity Laden Hamptons Demanding 'Tax the Rich, Not the Poor!'

Bad news for wealthy New York elites looking to avoid protestors by fleeing to The Hamptons. 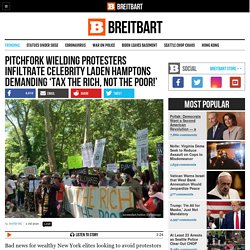 The pitchfork-wielding mob has found you, and they’re not backing down. A group of more than 200 protestors on foot and in cars reportedly invaded The Hamptons on Wednesday, singling out the homes of billionaire and failed presidential candidate Mike Bloomberg, Blackstone CEO Steven Schwarzman, and real estate developer Stephen Ross, according to reports from the New York Post and Newsday. Watch below: White Teen Raped By Obama's Thugs, Corpse Fed to Wild Animals - TRENDINGRIGHTWING. When it comes to the controversial group Black Lives Matter, isn’t it about time that we call a spade a spade?

This activist (read: domestic terror) continues to call for massacring white people, and Obama never told them to back off. Those of us who love America realize that this hateful rhetoric is only going to continue to metastasize as many more examples will start to come our way. One case in point might have occurred all the way back in 2009 when New York teenager Brittanee Drexel went missing when she was on a spring break trip to Myrtle Beach. Although the FBI investigated the case for many years, every lead they investigated failed to pan out. Although they weren’t able to completely figure out what happened to this young girl until just recently, now that the truth has come out it is yet another example of how racial tensions were NOT improved for the better under the leadership of Barack Hussein Obama.

CNN Reporter Robbed at Knifepoint on Live TV - Daily Patriot Report. A CNN reporter was robbed at knifepoint while giving a live report in São Paolo on Saturday for CNN Brasil. CNN Brasil reporter Bruna Macedo was reporting on rising water levels at the Bandeiras Bridge in São Paolo when suddenly there was a man lurking behind her with a hoodie on. He didn't wait long to make his move. He advanced toward Macedo and she actually greeted him before he pulled a knife on her. Macedo quickly handed over two cellphones before the feed was cut. Harvard Girl Cries and Blames Trump Supporters After Threatening to Stab Anyone Who Says 'All Lives Matter' - Daily Patriot Report. This Harvard girl displays the wokeness that has indoctrinated the college systems across America. She threatened to stab those who have different views than her.

She actually graduated from Harvard this year. Facebook cleanses site of egregious anti-government group responsible for death of cops. No, not that one. Get the latest BPR news delivered free to your inbox daily. SIGN UP HERE. Facebook, which has done virtually nothing to stop left-wing Antifa extremists from using its platform to spread hate and incite violence, has taken aim at a “right-wing” group allegedly responsible for the murder of two California police officers. “A far-right movement whose followers have appeared heavily armed at recent US protests has suddenly become one of the biggest worries of law enforcement, after one member killed two California police officers,” the Associated Press reported around the middle of last month.

Chris Cuomo Compares July 4 Celebration and Protests: Would be 'Madness' to Mandate Masks at Protests - Daily Patriot Report. Elijah McClain: Aurora Police On Leave For Shared Photos. Twitter Elijah McClain playing the violin at an animal shelter. Three Aurora Police officers have been placed on leave after they shared photos taken near the site where Black man Elijah McClain died, according to an official statement. McClain died in August 2019 at age 23 after he was placed in a chokehold by police for 15 minutes. He was stopped by police while walking home from a convenience store in Colorado. Protesters scream at trapped Fox News reporter, demand apology: 'Be humble, you're gonna lose your job anyway' In many Democrat-run cities, the rage mob continues to control the streets as police have largely been emasculated amid the fall out from the Black Lives Matter riots. UK Begins Deporting Criminal Migrants Back to Their Home Countries.

Bill Maher has once again shown that even a broken clock is right twice a day with an observation that were it made by a conservative, would have resulted in piercing shrieks of racism. The HBO host who is normally a reliable shill for the Democrats has challenged the SJW orthodoxy by pointing out that the mobs of angry protesters who are tearing down statues are actually doing harm to social justice causes. Seriously can’t even BELIEVE that WaPo tried to get away with this headline on dangerous Democrat-controlled cities. Planned Parenthood Advocates Burn American Flag to Protest Pro-Life Legislation - Strong America News.