Trump is convinced he’s going to lose ... and plotting for 2024. The prison guards thing is real. 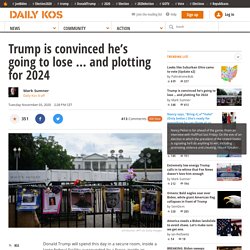 Trump’s violence whisperer, Attorney General Bill Barr, is once again sweeping through the dregs of the Department of Justice to find a thousand officers used in putting down prison riots and bringing them in to “defend the nation’s capital.” Presumably because they couldn’t think of anything less appropriate. So expect to see, once again, people patrolling the streets of Washington, D.C., who look as if they’re out to bag a deer. Camo works so well on city streets. The mere fact that Trump is not planning to appear on stage somewhere in front of a sea of red hats says everything about what he expects tonight. 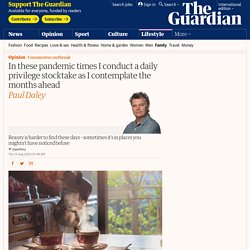 Eyes widen with wariness above masks, multi-patterned and coloured flourishes that defy the pandemic’s gloom, as we widen our passage on the street and in the supermarket. But how people smile with their eyes when their mouths are covered! And that is something I’d never had much cause to notice before. Then again, there is quite a lot we are noticing in these pandemic times, about ourselves and others, that we probably didn’t previously see. Things that were largely remote fears for many of us – health, social, professional, familial, economic – are now much closer to the door.

We're thinking about Covid-19 the wrong way. It's not a 'wave' – it's a wildfire. We have no previous experience with a worldwide coronavirus pandemic, so when Sars-CoV-2, the virus that causes Covid-19, began spreading, public health experts leaned on our experiences with influenza pandemics to inform their predictions. 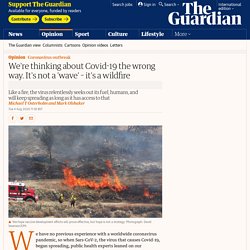 These pandemics are often described in terms of “waves” and “troughs”. We have now seen enough to replace the ocean analogy with a better one: wildfire. Like a wildfire, the virus relentlessly seeks out fuel (human hosts), devastating some areas while sparing others. It will continue spreading until we achieve sufficient herd immunity – when 50 to 70% of the population has developed protective antibodies – to significantly slow transmission. We will achieve herd immunity either through widespread infection or an effective and widely available vaccine. What Trump Can Teach Us About Con Law. 1. Instead of my usual monthly Burma (Myanmar) topic, this History Thread is a brief backgrounder on Portland, Oregon’s history as it relates to the ongoing Portland Black Lives Matter protest situation, along with an overview of those events.

Barack Obama’s Eulogy for John Lewis: Full Text. Once we pass the John Lewis Voting Rights Act, we should keep marching to make it even better by making sure every American is automatically registered to vote, including former inmates who’ve earned their second chance. 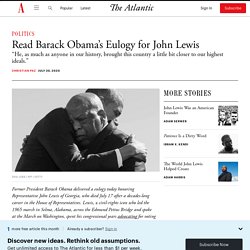 By adding polling places and expanding early voting and making Election Day a national holiday, so if you are somebody who’s working in a factory or you’re a single mom, who’s got to go to her job and doesn’t get time off, you can still cast your ballot. By guaranteeing that every American citizen has equal representation in our government, including the American citizens who live in Washington, D.C., and in Puerto Rico. They’re Americans. Ted Corcoran PDX Recap. We Are Tracking What Happens to Police After They Use Force on Protestors. A bipartisan group secretly gathered to game out a contested Trump-Biden election. It wasn’t pretty.

Get Today in Politics in your inboxA digest of the top political stories from the Globe, sent to your inbox Monday-Friday. 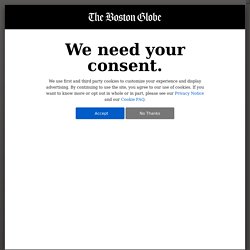 Using a role-playing game that is a fixture of military and national security planning, the group envisioned a dark 11 weeks between Election Day and Inauguration Day, one in which Trump and his Republican allies used every apparatus of government — the Postal Service, state lawmakers, the Justice Department, federal agents, and the military — to hold onto power, and Democrats took to the courts and the streets to try to stop it.

Greta and Malala: why photos of Thunberg are a flicker of light in a dark, dark world. Know their names: Black people killed by the police in the US. Warning Statement on the Potential for Mass Atrocities in the United States. We are a nonpartisan group of former and current atrocities prevention, human rights, humanitarian, counterterrorism, and democratization professionals, advocates, academics, and practitioners. 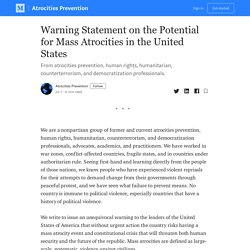 We have worked in war zones, conflict-affected countries, fragile states, and in countries under authoritarian rule. Seeing first-hand and learning directly from the people of those nations, we know people who have experienced violent reprisals for their attempts to demand change from their governments through peaceful protest, and we have seen what failure to prevent means. No country is immune to political violence, especially countries that have a history of political violence. We write to issue an unequivocal warning to the leaders of the United States of America that without urgent action the country risks having a mass atrocity event and constitutional crisis that will threaten both human security and the future of the republic. 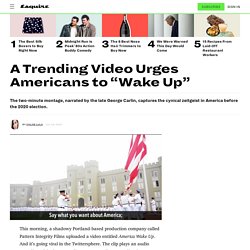 Trump has helped the US to see its dark side. It will still be there when he goes. If Donald Trump loses in November – and it’s a very big if, of course – then under Joe Biden, it will be hard for the United States not to be seduced into collective amnesia. 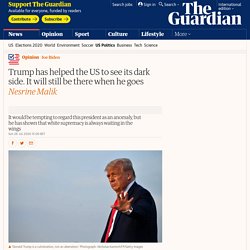 The Trump presidency has represented such a thorough subversion of political norms that, with a Biden victory, the temptation to move on from it as swiftly as possible will be strong. Already the signs are beginning to appear. Barack Obama Beautifully Remembers Rep. John Lewis. Former President Barack Obama remembered the late Rep. 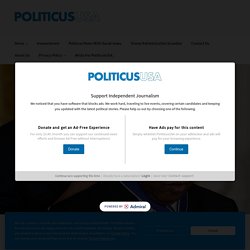 John Lewis and perfectly summed up the enormous impact that Lewis had on the United States. In a statement provided to PoliticusUSA, Obama said: America is a constant work in progress. What gives each new generation purpose is to take up the unfinished work of the last and carry it further – to speak out for what’s right, to challenge an unjust status quo, and to imagine a better world. 20160307 evopsych ebook.

Waging peace is much more than ending war. Half of the Earth must be preserved for nature conse... Unstanched haemorrhaging has only one end in all biological systems: death for an organism, extinction for a species. 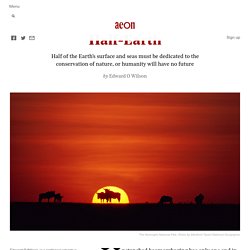 Researchers who study the trajectory of biodiversity loss are alarmed that, within the century, an exponentially rising extinction rate might easily wipe out most of the species still surviving at the present time. The crucial factor in the life and death of species is the amount of suitable habitat left to them. Think Malheur was stolen? Talk to the Paiutes. Documentaries 20160131 BlackLivesMatterTheStoryOfASlogan.

This year in forgotten obituaries: Climate deniers, hoverboards, and American empathy. The end of a year is always cause for reflection, and often it is reflection on those we have lost. Recommendations to the UN Security Council Committee on Counter Terrorism. Journal of Political Risk, Vol. 3, No. 12, December 2015. By Scott Atran A. Aeon. E.O. Wilson’s Wants Us to Leave Half of the Earth Alone—Here's Why. You can’t miss E.O. Wilson. He’s the tall, lanky, Gary Cooper-like presence sitting behind a mountain of papers in the cafeteria of Brookhaven at Lexington, an upscale assisted-living complex roughly 13 miles from Boston.

The Netanyahu Disaster. Scott Atran — Hopes and Dreams in a World of Fear. U.S. media coverage of the Israeli-Palestinian conflict by WBEZ's Worldview. Iraq war 10th anniversary: George Bush’s invasion of Iraq has accelerated the collapse of the Middle East’s European-imposed borders. President Obama sings Amazing Grace (C-SPAN) McLaughlin: The Middle East Conflict With 5 Dimensions. David Brooks - Op-Ed Columnist. 20151214 hiddenbrain terrorism. Why ISIS has the potential to be a world-altering re...