Republican Impeachment Report: Dems Have No Evidence On President Trump, No Crimes Committed. Top Republican lawmakers finalized a report Monday exonerating President Donald Trump from any wrongdoing regarding Ukraine just as Democrats with the House Judiciary Committee prepare to launch their own impeachment inquiry into the president, according to a report reviewed by SaraACarter.com. 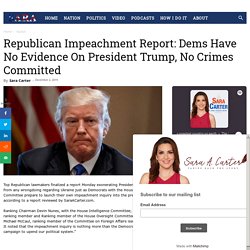 Ranking Chairman Devin Nunes, with the House Intelligence Committee; Rep. Jim Jordan, ranking member and Ranking member of the House Oversight Committee and Rep. Michael McCaul, ranking member of the Committee on Foreign Affairs issued the report. It noted that the impeachment inquiry is nothing more than the Democrats ‘orchestrated campaign to upend our political system.” President Trump departed Washington D.C. Republican Impeachment Report: Dems Have No Evidence On President Trump. No Crimes Committed. Republican List of Witnesses for Impeachment hearings. Republicans: Pelosi's Impeachment Inquiry a 'Soviet-Style Show Trial' The RNC’s protest came the day after Democrats on the House Rules Committee rejected every one of 17 amendments offered by Republicans, even on minor points such as allowing members of the House Intelligence Committee to yield their speaking time to one another rather than to professional, unelected committee staff. 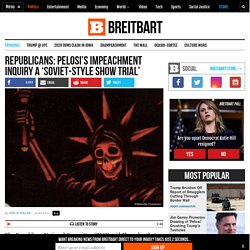 Democrats continue to claim that they do not need to vote to authorize an impeachment inquiry, but Pelosi backed down after the spectacle of holding secret hearings in the House Intelligence Committee became too embarrassing. However, the proposed rules continue to allow closed-door meetings. In addition, they depart significantly from the precedents established in previous presidential impeachment inquiries.

Rep. Doug Collins Challenges Schiff in Impeachment Fight: 'Folks, This Ain't Over' Before Storming The SCIF, Repubs Unite Outside Of 'Schiff's Bunker' In The Capitol Basement & Demand 'Transparency' - Rep. 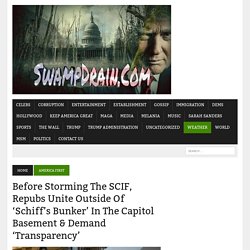 Matt Gaetz (R-FL) led the fight with Freedom Caucus members and Republican colleagues Wednesday, holding a press conference and demanding transparency into Democrats’ secret impeachment probe against President Donald Trump. Hot take: The Republicans who occupied the SCIF are ‘the antifa of Capitol Hill’ We’ve already heard from one journalist, David Leavitt, who believes all the Republicans who “invaded the SCIF” Wednesday to protest Rep. 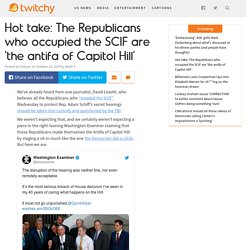 Adam Schiff’s secret hearings should be taken into custody and questioned by the FBI. We weren’t expecting that, and we certainly weren’t expecting a piece in the right-leaning Washington Examiner claiming that those Republicans made themselves the Antifa of Capitol Hill by staging a sit-in much like the one the Democrats did in 2016. But here we are: The disruption of the hearing was neither fine, nor even remotely acceptable. It’s the most serious breach of House decorum I’ve seen in my 40 years of caring what happens on the Hill. 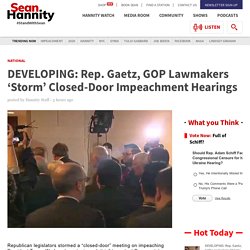 “House Republicans led by Rep. Matt Gaetz, R-Fla., on Wednesday essentially stormed a closed-door session connected to the impeachment investigation of President Trump, prompting House Intelligence Committee Chairman Adam Schiff to suspend the proceedings in a remarkable scene,” reports Fox News. “We’re going to try and go in there, and we’re going to try to figure out what’s going on, on behalf of the millions of Americans that we represent that want to see this Congress working for them and not obsess with attacking a president who we believe has not done anything to deserve impeachment,” Gaetz said. 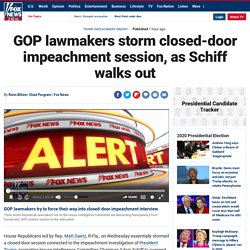 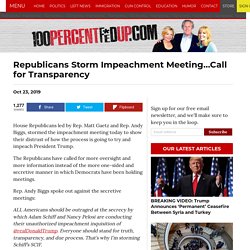 Matt Gaetz and Rep. Andy Biggs, stormed the impeachment meeting today to show their distrust of how the process is going to try and impeach President Trump. The Republicans have called for more oversight and more information instead of the more one-sided and secretive manner in which Democrats have been holding meetings. Rep. Andy Biggs spoke out against the secretive meetings: ALL Americans should be outraged at the secrecy by which Adam Schiff and Nancy Pelosi are conducting their unauthorized impeachment inquisition of @realDonaldTrump. Republicans Storm Closed Impeachment Proceeding. House Republicans briefly shut down a closed-door meeting Wednesday by storming the room where lawmakers were questioning a Defense Department official involving the impeachment inquiry into President Donald Trump. 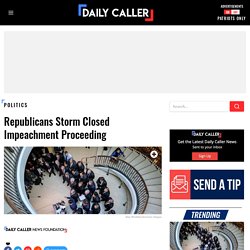 Over a dozen Republican lawmakers gathered outside of the private meeting room Wednesday and told reporters that they would try to enter the closed-door deposition regarding the official impeachment inquiry into Trump. The House intelligence, foreign affairs and oversight committees are leading these proceedings after allegations that Trump asked Ukrainian officials to investigate former Vice President Joe Biden and his son Hunter Biden.

“We’re gonna go and see if we can get inside,” Republican Florida Rep. Matt Gaetz told reporters according to a video posted on Twitter. (RELATED: What Is The Process For Impeaching A President?) Republicans force their way into secret impeachment proceedings;  Adam Schiff reportedly takes witness and leaves. Dems flaunt Taylor testimony as game-changer, Unfazed White House calls it nonsense. The liberal media is convinced that there is now a smoking gun in the Democratic Party’s partisan impeachment inquiry following Tuesday’s closed-door testimony by Acting U.S. 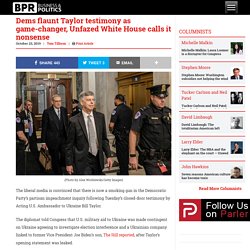 Ambassador to Ukraine Bill Taylor. The diplomat told Congress that U.S. military aid to Ukraine was made contingent on Ukraine agreeing to investigate election interference and a Ukrainian company linked to former Vice President Joe Biden’s son, The Hill reported, after Taylor’s opening statement was leaked. “[T]he push to make President Zelensky publicly commit to investigations of Burisma and alleged interference in the 2016 election showed how the official foreign policy of the United States was undercut by the regular efforts led by Mr. 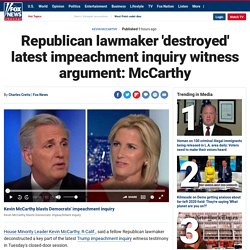 "In 90 seconds, we had John Ratcliffe destroy [acting U.S. Ambassador to Ukraine Bill] Taylor's whole argument," McCarthy said. The questioning by Ratcliffe, a Texas Republican and member of both the House Intelligence and Judiciary Committees, was an important moment in the hearing, McCarthy claimed. "We can't really talk about it," he said. EXCLUSIVE: We Asked Every GOP Senator About Impeachment. Seven Ruled It Out. The Daily Caller contacted every Republican Senate office this week to ask if they would rule out impeachment.

The responses indicate that while many Republicans are willing to criticize the inquiry, most will not rule out voting to remove Trump from office altogether. Many Senate offices were unwilling to respond to our inquiries altogether. Scalise Faces Congress & Discloses Five Ways The 'Scheme' To Impeach Trump Is 'Rotten To The Core' - Congressman Steve Scalise (R-LA) stepped up to the podium and ripped apart Democrats’ effort to impeach President Trump during a recent speech on Capitol Hill. In a section of his speech that he uploaded to Twitter, Rep. Scalise disclosed how Democrats’ “impeachment inquiry” is really a “scheme.” Scalise then pointed out, in the caption of his tweet, five ways Democrats’ inquiry is “rotten to the core,” which are as follows: It’s “all done in secret”, it’s led by “proven-liar” Adam Schiff, there was “no authorization from the House”, it’s “full of misleading leaks” from Dems and “members of Congress are denied access”.

“With all due respect, this process is rotten to the core,” Scalise said in the video of his speech. “You can talk about process. “You literally have a chairman (Adam Schiff) who is running around for two years during the Mueller investigation, who said he had ‘more than circumstantial evidence’ that there was collusion between the President and Russia,” Scalise said. Rep. Lee Zeldin: Schiff's Questioning During Impeachment Hearings Is 'Disgusting' Rep. Lee Zeldin (R-NY) spent more time in closed-door depositions on impeachment than House Intelligence Committee Chairman Adam Schiff, he told Fox News host Bill Hemmer Tuesday. Further, Zeldin called Schiff’s questioning “disgusting” for playing into his anti-Trump narrative. “I will tell you that there is nothing from anything that I’ve heard that you could possibly impeach the President of the United States for,” said Zeldin.

“They have creativity in developing a narrative, a story to try to connect all sorts of different dots that aren’t actually connected. I see it with the way Chairman Schiff asks his questions inside these depositions.” One example of Schiff’s unfair questioning Zeldin provided was during former adviser to Secretary of State Mike Pompeo Michael McKinley’s testimony. Despite enduring hours of questioning witnesses, Zeldin said, Democrats have no basis for impeachment. Trump demands deposition of Adam Schiff; asks 'when do the Republicans finally fight back?' On Sunday, ahead of Monday’s Republican planned vote in the House to censure Adam Schiff, President Trump scorched congressional Democrats and demanded Adam Schiff be deposed. In the same tweets, he criticized Republicans for not fighting back against the left’s series of political hoaxes drummed up against him and the GOP. Trump began his tirade by posting: “This Scam going on right now by the Democrats against the Republican Party, and me, was all about a perfect phone call I had with the Ukrainian President.

Congressman Jim Jordan Rips Adam Schiff's Closed-Door Impeachment - 'They’re Making the Rules Up as They Go' GOP Rep. Zeldin: Impeachment Process Based on 'Cherry-Picked Leaks' to Mislead the American Public. Watch Live: Women Stage ‘Stop the Impeachment Now’ March in D.C. Women for America First organized the march which will take place around the Capitol building in D.C. and in dozens of other cities.

“We want our President to know he is not alone and we stand with him,” an announcement of the march states. “Our President needs us more than ever before.