UPDATE: Dems Are SHOOK After Rudy’s Latest Announcement About Alleged Voter Fraud…It’s Started To Sink In Trump Might Win. Democrats and the media started to freak out after The Trump campaign’s latest announcement about voter fraud. 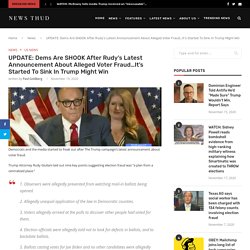 Trump Attorney Rudy Giuliani laid out nine key points suggesting election fraud was “a plan from a centralized place.” 1. Observers were allegedly prevented from watching mail-in ballots being opened.2. Allegedly unequal application of the law in Democratic counties.3. Voters allegedly arrived at the polls to discover other people had voted for them.4. Number nine is what scares liberals the most. The Trump campaign’s presser was not to attempt to change ballot votes counts. Their plan is to show evidence of that massive voter fraud operation took place and to get the case before the Supreme Court. If the President’s team successfully proves points 1 thru 8, the case will most certainly end up before the Supreme Court. CNN reporter, Amanda Carpenter was the first crack in the dam, she’s starting to realize Trump has a viable case. EVERYONE KEEPS MAKING THE SAME MISTAKE. WATCH: McEnany tells media Trump received an "inexcusable" transition in 2016.

During a contentious press conference, White House Press Secretary Kayleigh McEnany told reporters President Trump will not concede while his legal challenges are still ongoing and have not concluded. 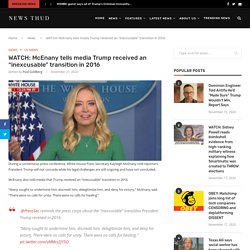 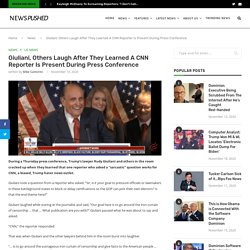 Giuliani took a question from a reporter who asked: “Sir, is it your goal to pressure officials or lawmakers in these battleground states to block or delay certifications so the GOP can pick their own electors? Is that the end theme here?” Giuliani laughed while staring at the journalist and said, “Our goal here is to go around the iron curtain of censorship … that … What publication are you with?” Whoa: Nearly a Third of Democrats Believe the Election Was Stolen From Trump. You know it’s bad when 30% of Democrats think the election was stolen from President Trump. 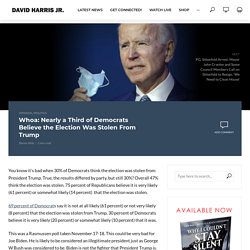 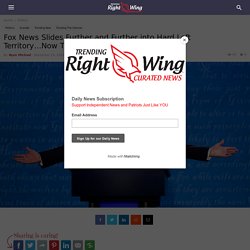 Now Fox News is saying President Trump should work with the Biden team for a smooth transition of power. It seems Fox is abandoning Conservatives and pushing the Leftist agenda. Fox and the fake news. Sidney Powell spoke with Howie Carr about a terrifying, global plot. Sidney Powell says evidence of voter fraud could be released online 'by this weekend' (TheBlaze) – Attorney Sidney Powell announced Friday that the Donald Trump campaign legal team will possibly begin making public evidence from affidavits supporting their claims of a “national conspiracy” of voter fraud in the 2020 presidential election as soon as this weekend. 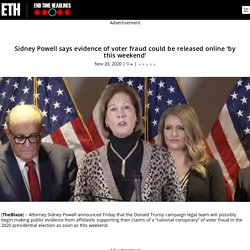 Speaking to BlazeTV host Glenn Beck on the radio, Powell told Beck documents backing up allegations she made against voting system companies Smartmatic and Dominion in a press conference Thursday will be published online soon. “We will start putting documents online and sending them to people like you, as soon as we possibly can,” Powell said. “I would hope that we could start that by this weekend.” GOP Vindicated By Voters - The GOP Times. The governor of Iowa said she was “disappointed in the current state of the race” for the president but said how the many GOP wins were vindicated by voters. 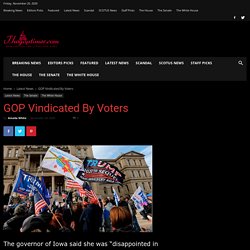 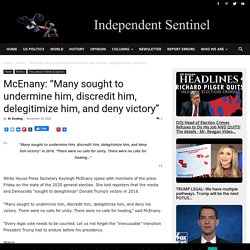 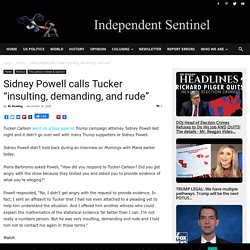 Sidney Powell didn’t hold back during an interview on Mornings with Maria earlier today. Maria Bartiromo asked Powell, “How did you respond to Tucker Carlson? Did you get angry with the show because they texted you and asked you to provide evidence of what you’re alleging?” Powell responded, “No, I didn’t get angry with the request to provide evidence. WATCH: Sidney Powell Fires Back at Tucker "He Was Insulting, Demanding and Rude" Calling in to the Fox Business Network, Trump lawyer Sidney Powell fired back at Tucker Carlson after he dedicated a segment to questioning her claims. 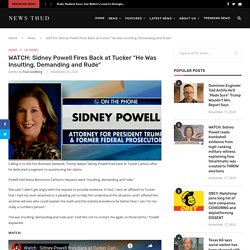 Powell told Maria Bartiromo Carlson’s requests were “insulting, demanding and rude.” She said “I didn’t get angry with the request to provide evidence. In fact, I sent an affidavit to Tucker that I had not even attached to a pleading yet to help him understand the situation, and I offered him another witness who could explain the math and the statistical evidence far better than I can. Mark Levin defends Sidney Powell’s efforts to expose voter fraud, says she’s a patriot! Mark Levin defended Sidney Powell a few minutes ago on Twitter, calling her a patriot and saying that she and the other lawyers deserve our thanks for trying to get to the bottom of this election fraud.

He also defended the investigation itself: 1. Status of voting fraud cases in presidential race so far. Voter fraud likely had a lot to do with the electoral results in Michigan, Pennsylvania, and other states. The expansion of mail-in voting with COVID as the guise was easily subject to fraud. Proof: Democrats Caught With Vote Fraud. Even before Thursday’s stunning press conference by Trump campaign lawyers Rudy Giuliani, Sidney Powell, and Jenna Ellis, it had become clear the Democrats had used an “all of the above” strategy to steal the 2020 presidential election.

Even a Democrat in Georgia is speaking out. The state’s recount has uncovered some errors, but is it enough to turn Georgia red? Exclusive: Jim Banks Proposes Bill to Combat Voter Fraud, Restore Faith in Elections. Rep. Jim Banks (R-IN) introduced legislation on Thursday to combat voter fraud across the United States and restore faith in the American electoral system, Breitbart News has exclusively learned.

Sidney Powell drops astonishing allegations against voting machine tech, vows to prove it in bombshell presser. Rudy Giuliani: There are Enough Illegal Ballots for President Trump to Win the Election. Rudy Giuliani and the legal team for President Donald Trump laid their “opening statement” out today by discussing the massive amount of evidence they say they have compiled in multiple battleground states. The former New York City mayor says there is enough evidence of voter fraud in battleground states like Pennsylvania and Michigan that, if those illegal ballots are thrown out, President Trump would win the election.

“I can prove to you that he won Pennsylvania by 300,000 votes. Sidney Powell: "President Trump Won By a Landslide. We Are Going to Prove It" Jim Jordan: Congress Should Investigate 2020 Election. On Wednesday’s broadcast of the Fox News Channel’s “Hannity,” House Judiciary Committee Ranking Member Rep. Jim Jordan (R-OH) stated that there should be a Congressional investigation of the 2020 election by the House Judiciary Committee and House Oversight and Reform Committee. Cruz: 'Abuses of Power' by Tech Companies 'Aided and Abetted by Democrats' Will 'Get Worse' Rep. Brooks: Congress Has ‘Absolute Right’ to Reject a State’s Electoral College Votes. Craig Huey: US Election System is ‘Broken’ Reuters: Poll says majority of Republicans agree Trump ‘rightfully won,’ election was rigged.

Trump Tells GOP Senator His Plans for 2024 If The Courts Don't Side With Him. Breaking News: Top Attorney Releases Archive of FRAUD Evidence - The GOP Times. Watch: Dems Threaten GOP Election Officials Children To Approve Shady Ballot Count. This Is Extortion. The Obscene Court is Going to Make the Election Honest - Surely You Jest! MASSIVE Announcement Made by the Head of the FEC [Watch] - The GOP Times.

Video Shows Exactly How They Cheated - The GOP Times. BREAKING: Law firm representing Trump in Pennsylvania withdraws from case. Outraged Lou Dobbs demands GOP help Trump fight for 'what is rightfully his' ‘It’s NOT over’ says Pete Hegseth on Hannity about 2020. Left is ‘HELL-bent’ on DESTROYING One Person, One Vote. Kayleigh McEnany Presents Entire Stack of EVIDENCE - The GOP Times.

Anomalies strongly point to fraudulent votes in some blue cities. Nicole Malliotakis Flips a NYC Congressional Seat to Red. Listen to Pelosi & Sanders! Only legal votes, don't trust the machines - www.independentsentinel.com. Deficiency Letter 1. FEC Chair Drops the Hammer: The Results Are 'Illegitimate' Trump Trails Biden by 11.6K in Arizona: ‘We Will Easily Win’ Obama: Trump's Claims of Widespread Fraud Another Step in 'Delegitimizing' Democracy. 9 Laws Republicans Must Pass to Stop Voter Fraud. 9 Laws Republicans Must Pass to Stop Voter Fraud. Chair of the Federal Election Commission: There Is Voter Fraud Taking Place. KERIK TELLS STARNES: "This is Gonna Be One of the Biggest Political Scandals of All Time"

Jonathan Turley: Of course we don’t have evidence of systemic voter fraud yet… Articles. Republican Senator Calls on Trump to Cooperate with 'Biden Transition' Kayleigh McEnany lays out voter fraud affidavit allegations on Twitter for all to see. WATCH: Biden replied "Yes" when asked "Will you pledge not to declare victory until the election is independently certified?" CNN's Chris Cuomo: Trump Is ‘A Dead Man Walking’ Jon Voight calls Biden choice a lie, urges Americans to not back down: 'There will be a price to pay' Unusual Election Irregularities Justify Lawsuits and Ballot Recounts: Chuck DeVore. Chris Cuomo calls Trump a 'dead man haunting the halls of a country in crisis'