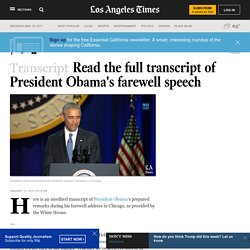 It’s good to be home. My fellow Americans, Michelle and I have been so touched by all the well-wishes we’ve received over the past few weeks. But tonight it’s my turn to say thanks. Whether we’ve seen eye-to-eye or rarely agreed at all, my conversations with you, the American people – in living rooms and schools; at farms and on factory floors; at diners and on distant outposts – are what have kept me honest, kept me inspired, and kept me going. Every day, I learned from you. I first came to Chicago when I was in my early 20s, still trying to figure out who I was; still searching for a purpose to my life. After eight years as your president, I still believe that. It’s the conviction that we are all created equal, endowed by our creator with certain unalienable rights, among them life, liberty, and the pursuit of happiness. 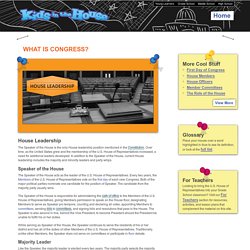 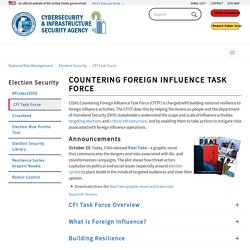 The CFITF does this by helping the American people and the Department of Homeland Security (DHS) stakeholders understand the scope and scale of influence activities targeting elections and critical infrastructure, and by enabling them to take actions to mitigate risks associated with foreign influence operations. Announcements October 23: Today, CISA released Real Fake—a graphic novel that communicates the dangers and risks associated with dis- and misinformation campaigns. The plot shows how threat actors capitalize on political and social issues (especially around election cycles) to plant doubt in the minds of targeted audiences and steer their opinion.

Download/share the Real Fake graphic novel and transcript. CFI Task Force Overview Guiding Principles The foremost principle guiding the CFITF is protection of privacy, free speech, and civil liberties. Rumor Control. Mis- and disinformation can undermine public confidence in the electoral process, as well as in our democracy. 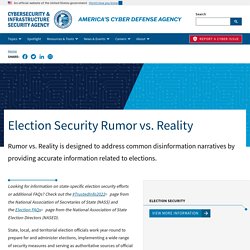 Elections are administered by state and local officials who implement numerous safeguards to protect the security of your vote pursuant to various state and federal laws and processes. This resource is designed to debunk common misinformation and disinformation narratives and themes that relate broadly to the security of election infrastructure and related processes. It is not intended to address jurisdiction-specific claims. Instead, this resource addresses election security rumors by describing common and generally applicable protective processes, security measures, and legal requirements designed to protect against or detect large-scale security issues related to election infrastructure and processes. 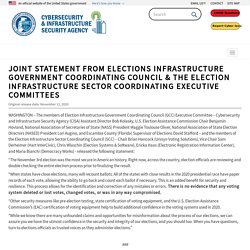 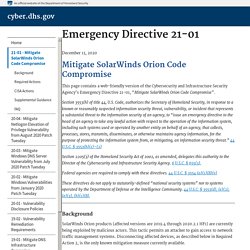 Background SolarWinds Orion products (affected versions are 2019.4 through 2020.2.1 HF1) are currently being exploited by malicious actors. This tactic permits an attacker to gain access to network traffic management systems. Disconnecting affected devices, as described below in Required Action 2, is the only known mitigation measure currently available. CISA has determined that this exploitation of SolarWinds products poses an unacceptable risk to Federal Civilian Executive Branch agencies and requires emergency action. Current exploitation of affected products and their widespread use to monitor traffic on major federal network systems; High potential for a compromise of agency information systems; Grave impact of a successful compromise. Required Actions CISA Actions Duration Additional Information.