Taking Christ's name in vain, Biden blasts biblical marriage 'bigots' While addressing one of the nation's leading homosexual activist groups on Friday in the nation's capital, Vice President Joe Biden used the name of Jesus Christ in vain while defending the claim of the LGBT community that homosexuality is hereditary. 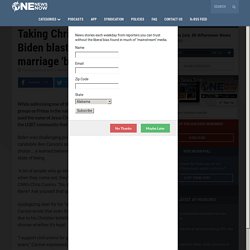 Biden was challenging prospective Republican presidential candidate Ben Carson's assertion last week that homosexuality is a choice … a learned behavior — not a gender or inherent biological state of being. "A lot of people who go into prison go into prison straight — and when they come out, they're gay," the acclaimed neurosurgeon told CNN's Chris Cuomo.

"So, did something happen while they were in there? Ask yourself that question. " Apologizing later for his "choice of language" on a Facebook post, Carson wrote that even though he opposes same-sex "marriage" due to his Christian beliefs, individual states should be able to choose whether it's legal. Apology not good enough "Every ridiculous assertion from Dr. Biden: Christians 'intolerant' of LGBT are 'virulent dregs of society' Former Vice President Joe Biden bashed Christians opposing the homosexual agenda as “forces of intolerance” and “virulent dregs of society” at a recent LGBT event, and a prominent pro-family group used his rant to alert Americans about what a leftist takeover in the nation’s capital would mean for believers. 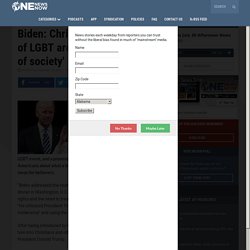 “Biden addressed the Human Rights Campaign’s (HRC) annual dinner in Washington, D.C., [and] spoke about the fight for LGBTQ rights and the need to treat everyone with dignity,” CSPAN reported. “He criticized President Trump as being an ally for the ‘forces of intolerance’ and using the White House as a ‘literal bully pulpit.’” After being introduced by HRC President Chad Griffin, Biden soon tore into Christians and other socially conservative supporters of President Donald Trump. Beware of LGBT takeover … A warning was soon sent out by a Washington, D.C. Resurfacing attack? Biden Calls Trump Supporters Virulent "Dregs of Society" Editor’s Note: Social media is cracking down on Conservative content. 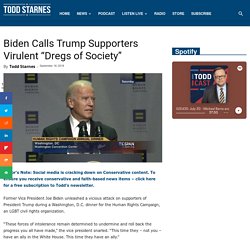 To ensure you receive conservative and faith-based news items – click here for a free subscription to Todd’s newsletter. Former Vice President Joe Biden unleashed a vicious attack on supporters of President Trump during a Washington, D.C. dinner for the Human Rights Campaign, an LGBT civil rights organization. “These forces of intolerance remain determined to undermine and roll back the progress you all have made,” the vice president snarled. “This time they – not you – have an ally in the White House. This time they have an ally.” And then the vice president unloaded on the “Make America Great Again” crowd. LF: Joe Biden Says Bible Believing Christians Violate LGBT Rights By Simply Existing. Status: Not Logged In; Sign In The Left's War On ChristiansSee other The Left's War On Christians Articles Title: Joe Biden Says Bible Believing Christians Violate LGBT Rights By Simply ExistingSource: Now The End BeginsURL Source: May 19, 2015Author: Geoffrey GriderPost Date: 2015-05-20 23:42:20 by Orwellian NightmareKeywords: NoneViews: 6488Comments: 13 Statement by the Vice President on the International Day Against Homophobia and Transphobia “For this cause God gave them up unto vile affections: for even their women did change the natural use into that which is against nature: And likewise also the men, leaving the natural use of the woman, burned in their lust one toward another; men with men working that which is unseemly, and receiving in themselves that recompence of their error which was meet.” 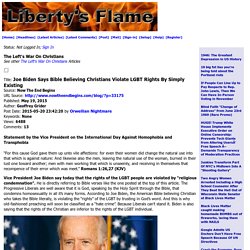 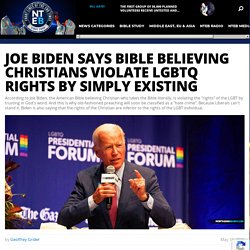 He is directly referring to Bible verses like the one posted at the top of this article. The Progressive Liberals are well aware that it is God, speaking by the Holy Spirit through the Bible, that condemns homosexuality in all its many forms. “For this cause God gave them up unto vile affections: for even their women did change the natural use into that which is against nature: And likewise also the men, leaving the natural use of the woman, burned in their lust one toward another; men with men working that which is unseemly, and receiving in themselves that recompence of their error which was meet.” Romans 1:26,27 (KJB) According to Joe Biden, the American Bible believing Christian who takes the Bible literally, is violating the “rights” of the LGBT by trusting in God’s word. Rogue Joe Biden Calls for Christians to Be Added to Terror Watch List for Opposing LGBTQE Abuse of Children - www.HNewsWire.com.

“What was the world like before Christian and Jesus? 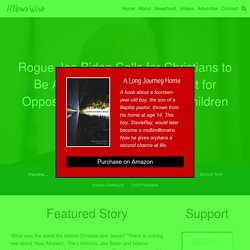 “There is nothing new about ‘New Atheism’. The ( Atheists, Joe Biden and Islamic extremists ) are going to take us back to a pre-Christian, pagan, racist world of inequality because without God there is no humanity. Without God, there are no morals.” Without GOD there are NO standards, it is hell on earth. Poverty, sickness, premature death, domestic violence, economic injustice, slavery, and political corruption will be there chosen life – enjoy. The coming of the lawless one is by the activity of Satan with all power and false signs and wonders, and with all wicked deception for those who are perishing, because they refused to love the truth. Satan has power over (LGBTQE-TRANS PEOPLE). With an increasing number of people in the West wishing for a world without Christianity that includes Joe Biden, ‘You might get what you want, but you might not want what you get” …..