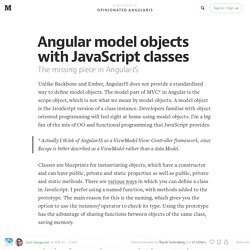 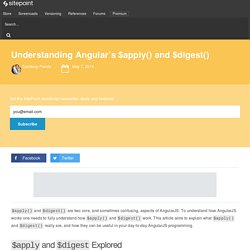 To understand how AngularJS works one needs to fully understand how $apply() and $digest() work. This article aims to explain what $apply() and $digest() really are, and how they can be useful in your day-to-day AngularJS programming. $apply and $digest Explored AngularJS offers an incredibly awesome feature known as two way data binding which greatly simplifies our lives. Data binding means that when you change something in the view, the scope model automagically updates.

The second argument passed to $watch() is known as a listener function, and is called whenever the value of aModel changes. Angularjs - Angular.js: service vs provider vs factory? Angular ui - angularjs ui-router - how to build master state which is global across app. Mgonto/restangular. AngularJS: 6 Common Pitfalls Using Scopes – TNG - The Nitty Gritty.

Within the last month Google's "Superheroic JavaScript MVW Framework" AngularJS has gotten a lot of attention. 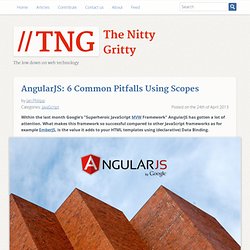 What makes this framework so successful compared to other JavaScript frameworks as for example EmberJS, is the value it adds to your HTML templates using (declarative) Data Binding. In the following I will describe some best practices when using AngularJS. If you are not familiar with AngularJS yet, please have a look at angularjs.org to get an overview and check out Kahlil's list of AngularJS Resources. Here are six main pitfalls when it comes to working with scopes in AngularJS. Six points which are actually easy if you understand the underlying concepts behind Angular. AngularJS: My solution to the ng-repeat performance problem. Databinding in angularjs. Brian Ford.

The AngularJS documentation is great for getting started and for looking up specific API calls. 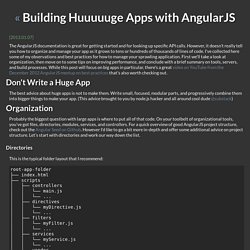 However, it doesn't really tell you how to organize and manage your app as it grows to tens or hundreds of thousands of lines of code. I've collected here some of my observations and best practices for how to manage your sprawling application. First we'll take a look at organization, then move on to some tips on improving performance, and conclude with a brief summary on tools, servers, and build processes. While this post will focus on big apps in particular, there's a great video on YouTube from the December 2012 AngularJS meetup on best practices that's also worth checking out. Don't Write a Huge App. Pasvaz/bindonce. AngularJS Performance Tuning for Long Lists. AnglarJS is great! 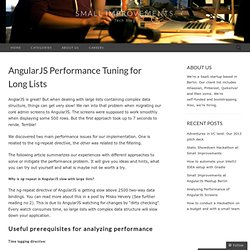 But when dealing with large lists containing complex data structure, things can get very slow! We ran into that problem when migrating our core admin screens to AngularJS. The screens were supposed to work smoothly when displaying some 500 rows. But the first approach took up to 7 seconds to rende. Terrible! Gsklee/ngStorage. Jason Dobry : Building large apps with AngularJS. New to AngularJS? 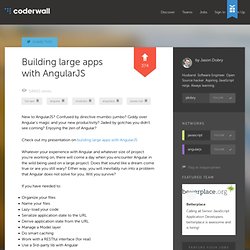 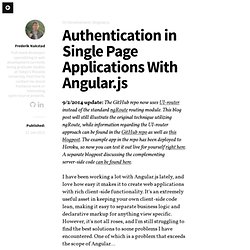 This blog post will still illustrate the original technique utilizing ngRoute, while information regarding the UI-router approach can be found in the GitHub repo as well as this blogpost. The example app in the repo has been deployed to Heroku, so now you can test it out live for yourself right here. Multi-user synchronization with racer and angular.js. Code Organization in Large AngularJS and JavaScript Applications — Cliff Meyers.

Many developers struggle with how to organize an application's code base once it grows in size. 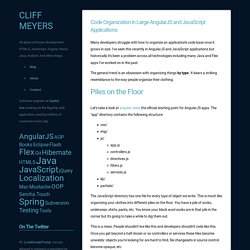 I've seen this recently in AngularJS and JavaScript applications but historically it's been a problem across all technologies including many Java and Flex apps I've worked on in the past. The general trend is an obsession with organizing things by type. It bears a striking resemblance to the way people organize their clothing. Let's take a look at angular-seed, the official starting point for AngularJS apps. The "app" directory contains the following structure: Code Organization in Large AngularJS and JavaScript Applications — Cliff Meyers. Загрузка модуля по требованию в AngularJS. Если вы очень спешите: то да, отложенная загрузка модулей в AngularJS возможна, и код необходимый для этого вы можете видеть ниже. 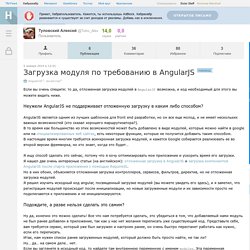 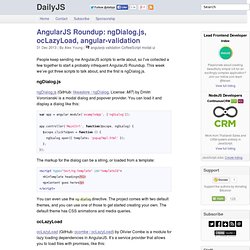 This week we’ve got three scripts to talk about, and the first is ngDialog.js. ngDialog.js ngDialog.js (GitHub: likeastore / ngDialog, License: MIT) by Dmitri Voronianski is a modal dialog and popover provider. You can load it and display a dialog like this: The markup for the dialog can be a string, or loaded from a template: <script type="text/ng-template" id="templateId"><h1>Template heading</h1><p>Content goes here</p></script>

All of these can change based on the applications environment with which it is deployed to. This post details an approach I used to configure an AngularJS app constants based on configuration specific to the environment using Grunt tasks. Angular js - configuration for different enviroments. Authentication in Single Page Applications with Angular.js - A Modest Proposal. I Wish I Knew Then What I Know Now. AngularJS is a powerful if stubborn Javascript framework.

What follows is simply a list of things that I wish were clearer to me when I started working with AngularJS. Hopefully, someone just starting with AngularJS will find this list helpful. Data Binded Directives Manipulate the data, not the DOM. In a “normal” Javascript application, the developer is used to writing lots of event listeners to respond to users. Additionally, you can write your own custom directives to manipulate a particular DOM element and add functionality to it. In short, when you start with AngularJS, you need to make a conscious effort to forget what you thought you knew about manipulating the DOM with Javascript. Services are just global objects. Writing an AngularJS App with Socket.IO. Introduction AngularJS is an awesome JavaScript framework that gives you two-way data binding that's both easy to use and fast, a powerful directive system that lets you use create reusable custom components, plus a lot more. Socket.IO is a cross-browser wrapper and polyfill for websockets that makes developing real-time applications a breeze.

Incidentally, the two work quite well together! Remastered Animation in AngularJS 1.2. Learn how to use the bigger and better animation features in AngularJS 1.2 AngularJS 1.2rc1 1.2 is out and this brings in a brand-new API for animations using ngAnimate. A lot has changed, but animations are better than ever. With 1.2, animations come full circle with new features such as support for ngClass, class expressions, and callbacks. Animations are also entirely class-based which means so long as a CSS class is present in your HTML code, then animations can be directly hooked into a working application. Pseudobry. Angular.js rocks and you’re flying high making AJAX requests left and right. Inject $http, shoot off a request and boom—the promise-based service hits your error or success callback.

$http.get('/foo/bar/' + itemId) .success(function (data) { data; }) .error(function (data, status, headers, config) { }); Okay, so you’ve got your data from your backend—now what? This particular bit of data doesn’t change very often, and you’re wondering why your client repeatedly makes the same request for the same data—what a waste! Save your users some time and bandwidth and tell that request to use caching! If you want you can actually reference $http’s default cache and retrieve items, remove items, clear the cache, etc. How do I "think in AngularJS" if I have a jQuery background. How is Angular Js different from jquery. AngularJS Directive Design Made Easy. AngularJS directives are cool AngularJS is a web application framework that makes creating complicated web applications much simpler.

One of its best features is the ability to create directives, or reusable web components. It gives you the ability to create new HTML tags and attributes, which can dynamically display content in response to data changes, as well as update the data when appropriate. They’re a big productivity booster because they let you wrap up a complicated interaction with the DOM in a nice, reusable package. Making directives is confusing at first It doesn’t take long to realize that directives are useful, and the ones that are bundled with AngularJS are well designed, but making directives can feel overwhelming at first. Specifically, it’s difficult to understand how to create a directive that responds to data changes, updates data, responds to events, or exposes events.

AngularJS is amazing… and hard as hell. I had been working in AngularJS for almost a year now, just right after they put Google’s logo in the web page. AngularJS — Superheroic JavaScript MVW Framework.