This section is for those more interested in the chemistry of phytochemicals as antibiotics and toxins. My favourite phrase: "Plants are Fast and Lethal"

Update: I got some insight through Chris Masterjohn's piece on glutathione.

Read the transcript in the second half. polyphenols stimulate the Nrf2 pathway the signals the body to produce glutathione--the body's master antioxidant and key to immunity and health. The hitch is that you need to have the raw materials to make glutathione, otherwise all you are getting is oxidative stress. This is a reason to get your antioxidants and polyphenols from food rather than pills, and make sure that other aspects of your diet (adequate protein, carbs and minerals) are in place. The case against antioxidants /  Getting Stronger. Antioxidant supplements are probably ineffective. 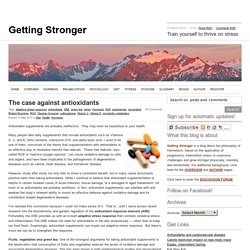 They may even be hazardous to your health. Many people take daily supplements that include antioxidants such as Vitamins A, C, and E; beta carotene, coenzyme Q10, and alpha lipoic acid. I used to be one of them, convinced of the theory that supplementation with antioxidants is an effective way to neutralize harmful free radicals. These free radicals, also called ROS or “reactive oxygen species”, can cause oxidative damage to cells and organs, and have been implicated in the pathogenesis of degenerative diseases such as cancer, heart disease, and Alzheimer’ disease.

However, study after study not only fails to show a consistent benefit, but in many cases documents positive harm from taking antioxidants. I’ve resisted this conclusion because I could not make sense of it. Fruits, vegetables and green tea. Antioxidant supplementation studies. These results were at first puzzling to me. The endogenous antioxidant defense. By Dr. 1. 2. 3. The chemical warfare on your plate – Rosemary Cottage Clinic Blog. Why insecticides in your veg can be healthy (sometimes)SCOOP: The remarkable story of how wheat learned to turn an insect’s immune system against itselfWhy that might not be so great for us humans Graphic by K Watson, USING original ‘killer vegetable’ cartoon by Ken Turner Plants are in constant chemical warfare with the insects, microbes and animals that want to eat them. 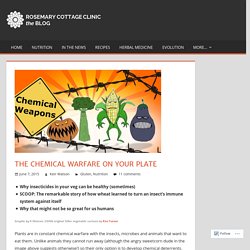 Unlike animals they cannot run away (although the angry sweetcorn dude in the image above suggests otherwise!) So their only option is to develop chemical deterrents. Consequently plants are chock-full of natural pesticides such as taninns, polyphenols, saponins, oxalates, cyanides, protease inhibitors, lectins and alkaloids to name just a few. According to new research, wheat may have developed a particularly clever chemical weapon in this insecticidal battle, and the extraordinary story of how it directly contributes to coeliac disease makes up the second half of this post. The answer: hormesis. Latest Glutathione research and news on what makes immune health stronger. Glutathione research is moving forward at an amazing pace. 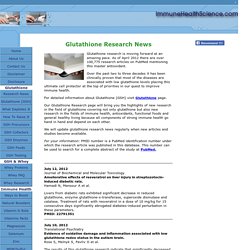 As of April 2012 there are over 100,775 research articles on PubMed mentioning this master antioxidant. Over the past two to three decades it has been clinically proven that most of the diseases are associated with low glutathione levels placing this ultimate cell protector at the top of priorities in our quest to improve immune health. 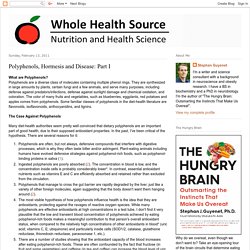 Polyphenols are a diverse class of molecules containing multiple phenol rings. They are synthesized in large amounts by plants, certain fungi and a few animals, and serve many purposes, including defense against predators/infections, defense against sunlight damage and chemical oxidation, and coloration. Whole Health Source: Polyphenols, Hormesis and Disease: Part II. In the last post, I explained that the body treats polyphenols as potentially harmful foreign chemicals, or "xenobiotics". 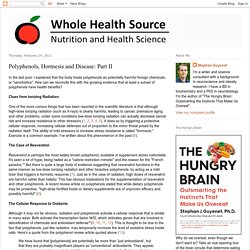 How can we reconcile this with the growing evidence that at least a subset of polyphenols have health benefits? Clues from Ionizing Radiation. Celiac, Gluten and Trypsin Inhibitor. Summary Forget the gluten. 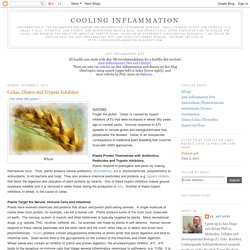 Celiac is caused by trypsin inhibitors (ATI) that were increased in wheat fifty years ago to combat pests. Immune response to ATI spreads to include gluten and transglutaminase that perpetuates the disease. Celiac is an unexpected consequence of traditional plant breeding that could be fixed with GMO approaches. Insulin Resistance Isn't All About Carbs and Insulin. Cooling Inflammation: Gut Microbiome 2014: Diet, Inflammation, Disease, and Repair. The year 2014 began with my posts on damage to the gut microbiotacaused by antibiotics, processed foods and excess hygiene. 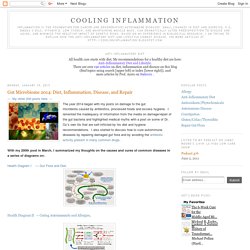 I lamented the inadequacy of information from the media on damage/repair of the gut bacteria and highlighted medical myths with a post on some of Dr. Oz’s own ills that are self-inflicted by his diet and hygiene recommendations. I also started to discuss how to cure autoimmune diseases by repairing damaged gut flora and by avoiding the antibiotic activity present in many common drugs. With my 200th post in March, I summarized my thoughts on the causes and cures of common diseases in a series of diagrams on: Cooling Inflammation: Phytochemicals, Natural Antibiotics and Antioxidants. Plants are mean and sneaky. 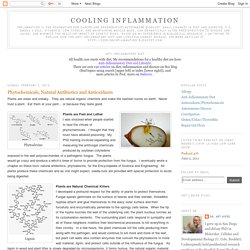 They are natural organic chemists and make the nastiest toxins on earth. Never trust a plant. Eat them at your peril… or because they taste good. Cooling Inflammation: SweetMyx Taste Enhancers, Alapyridains? --- Here are the other 200 blog posts ---I was just reading announcements of new synthetic chemicals (SweetMyx) to enhance the taste and help reduce sugar and salt in "health foods". 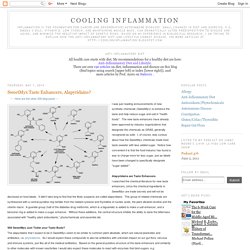 The new taste enhancers have already been approved by industry organizations that designate the chemicals as GRAS, generally recognized as safe. I, of course, was curious about how the SweetMyx chemicals made food taste sweeter with less added sugar. Notice how convenient it is that the food industry has found a way to charge more for less sugar, just as labels have been changed to specifically designate "sugar added:". Alapyridains are Taste Enhancers I searched the chemical literature for new taste enhancers, since the chemical ingredients in SweetMyx are trade secrets and will not be disclosed on food labels. Cooling Inflammation: Antibiotic Resistance, Superbugs and Drugs. Antibiotic resistance results, because spontaneous mutations occur so frequently that all bacteria are different. 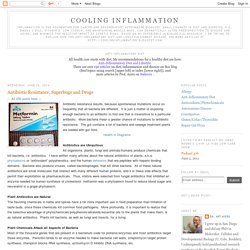 It is just a matter of exposing enough bacteria to an antibiotic to find one that is insensitive to a particular antibiotic. More bacteria mean a greater chance of mutations to antibiotic resistance. The gut contains a lot of bacteria and sewage treatment plants are loaded with gut flora. Antibiotics are Ubiquitous. Cooling Inflammation: Frankincense and Myrrh, Terpenoids. --- the other 200 posts ---'Tis the season to discuss phytochemicals. Plants produce a vast array of organic chemicals starting from molecules produced by all organisms, including humans. Essential Oils, Phytoalexins, Drugs Are All Antibiotics. --- the other 200 posts ---A recent, informative article by Tori Rodriguez for The Atlantic suggests that, I want to discuss other ramifications of using essential oils as antibiotics to avoid multiple antibiotic resistant superbugs.

Resistance to Essential Oils as Antibiotics.