A Doctor Used This 'Memory Hack' to Ace Exams at Cambridge. Cramming for an exam is, let's be honest, one of the least fun ways to spend your time. 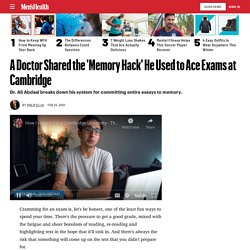 There's the pressure to get a good grade, mixed with the fatigue and sheer boredom of reading, re-reading and highlighting text in the hope that it'll sink in. And there's always the risk that something will come up on the test that you didn't prepare for. UCLA Anderson School of Management. Girls do a lot better than boys in the classroom, whether the measure is grades, disciplinary actions or graduation rates. 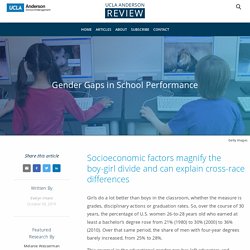 For male students, technical education in high school boosts earnings after graduation. Job prospects for young men who only have a high school diploma are particularly bleak. 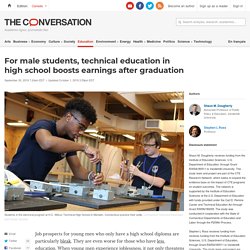 They are even worse for those who have less education. When young men experience joblessness, it not only threatens their financial well-being but their overall well-being and physical health. Could a high quality and specialized technical education in high school make a difference? Researchers Designed an Online Class That Boosts Grades by Changing Students' Beliefs. "Not only did [the study] confirm the effects of the growth mindset in the most rigorous way we could think of, it also showed us how much more there is to learn," says lead author David Yeager, an associate professor of psychology at the University of Texas at Austin. 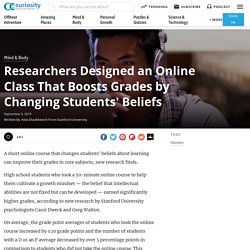 Funding came from the Raikes Foundation, the William T. Grant Foundation, the Spencer Foundation, the Bezos Family Foundation, the Character Laboratory, the Houston Endowment, the Yidan Prize for Education Research, the National Science Foundation, a personal gift from A. Colleges, universities seem to hate men. Can Title IX complaints fix? Higher education has a gender problem: With a surplus of women and a shortage of male students, colleges are becoming more and more gender unbalanced. 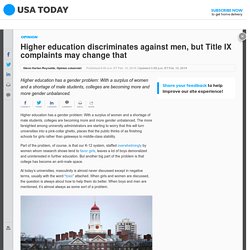 The more farsighted among university administrators are starting to worry that this will turn universities into a pink-collar ghetto, places that the public thinks of as finishing schools for girls rather than gateways to middle-class stability. Part of the problem, of course, is that our K-12 system, staffed overwhelmingly by women whom research shows tend to favor girls, leaves a lot of boys demoralized and uninterested in further education. But another big part of the problem is that college has become an anti-male space. 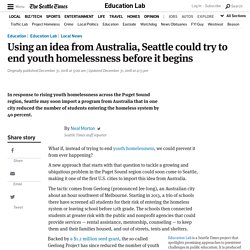 What if, instead of trying to end youth homelessness, we could prevent it from ever happening? A new approach that starts with that question to tackle a growing and ubiquitous problem in the Puget Sound region could soon come to Seattle, making it one of the first U.S. cities to import this idea from Australia. The tactic comes from Geelong (pronounced Jee-long), an Australian city about an hour southwest of Melbourne.

Starting in 2013, a trio of schools there have screened all students for their risk of entering the homeless system or leaving school before 12th grade. Education Lab is a Seattle Times project that spotlights promising approaches to persistent challenges in public education. . · Find out more about Education Lab. Academic Grievance Studies and the Corruption of Scholarship. This essay, although hopefully accessible to everyone, is the most thorough breakdown of the study and written for those who are already somewhat familiar with the problems of ideologically-motivated scholarship, radical skepticism and cultural constructivism.

Part I: Introduction Something has gone wrong in the university—especially in certain fields within the humanities. Futurebattleoncampus. Women Owe Almost $400 Billion More in Student Debt Than Men Do. Tackling the relentless pressure to succeed that's driving girls to despair. Be confident and speak up, and you can achieve great things, we tell our girls. 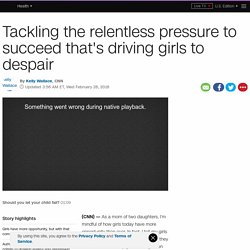 IQ Estimates by College Major – Statistic Brain. Women earned majority of doctoral degrees in 2016 for 8th straight year and outnumber men in grad school 135 to 100. The Council of Graduate Schools (CGS) released its annual report today on US graduate school enrollment and degrees for 2016 and here are some of the more interesting findings in this year’s report: For the eighth year in a row, women earned a majority of doctoral degrees awarded at US universities in 2016. 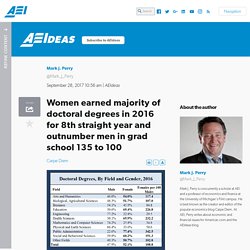 Of the 78,744 doctoral degrees awarded in 2016 (Table B.25), women earned 40,407 of those degrees and 52.1% of the total, compared to 37,145 degrees awarded to men who earned 47.9% of the total (see top chart above). Women have now earned a majority of doctoral degrees in each academic year since 2009. Why Men Are the New Minority in College - The Atlantic. Smart Assistants Will Stay Busy on College Campuses. As artificial intelligence breakthroughs continue to advance (consider the rise of “smart” personal assistants such as Amazon Alexa and Google Home), AI’s close cousin, machine learning, is also gaining attention. 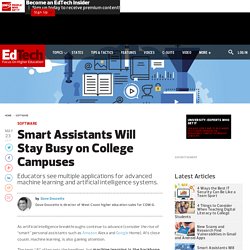 The term “AI” often gets the headlines, but machine learning is the backbone of the technology — the mathematical algorithms that make AI possible. We see machine learning at work every time we accidentally enter a typo during a Google search and the browser prompts, “Did you mean x?” Google has “learned,” based on previous searches by millions of users, to recognize both a likely error and the word we probably intended to use.

Machine learning is ripe for innovation, and computer scientists are eager to get to work. One indicator of how hot this topic has become: When higher education researchers around the world submitted proposals for Google’s 2016 Research Awards, a full 20 percent related to machine learning, up from 12 percent in 2015. Unsayable Truths About a Failing High School. Last week, my high school alma mater in the prosperous Montgomery County suburbs of Philadelphia went viral. 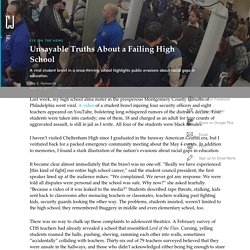 A video of a student brawl injuring four security officers and eight teachers appeared on YouTube, bolstering long-whispered rumors of the district’s decline. Four students were taken into custody; one of them, 18 and charged as an adult for four counts of aggravated assault, is still in jail as I write. California State University East Bay Partners With Cognii to Offer Artificial Intelligence Powered. HAYWARD, Calif., April 14, 2017 /PRNewswire/ -- Cal State East Bay, a top-tier public university, and Cognii Inc., a leading provider of artificial intelligence-based educational technologies, today announced a partnership. Cognii will work with Cal State East Bay to develop a new learning and assessment experience, powered by Cognii's Virtual Learning Assistant technology.

Essay: Improving student success may mean fixing subpar courses. Not long ago, San Francisco investor and entrepreneur John Greathouse penned an op-ed in The Wall Street Journal claiming he found a solution to the tech industry’s diversity problem. Because of rampant bias in the tech industry, Greathouse suggested female job candidates should “create an online presence that obscures their gender” in order to improve their employment prospects. The response was swift and vicious. Concealing one’s gender in response to bias addresses the symptom rather than the disease (biased hiring managers/employers and biased hiring practices).