MinecraftEdu. Clickteam - Home. Arcade Game Studio™ - "create games with a real classic arcade feel" ARGS is a program tool for making games with the look and feel of the '80s arcade games. 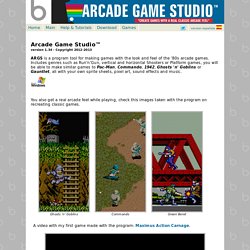 Includes genres such as Run'n'Gun, vertical and horizontal Shooters or Platform games, you will be able to make similar games to Pac-Man, Commando, 1942, Ghosts 'n' Goblins or Gauntlet, all with your own sprite sheets, pixel art, sound effects and music. You also get a real arcade feel while playing, check this images taken with the program on recreating classic games. Ghosts 'n' Goblins Commando Green Beret Maximus Action Carnage Trailer. Video showing ARGS in motion, oviously all sprite sheets and tunes are used only for demostration purposes and they are not included in any way with the program. A Capcom's Ghosts'n'Goblins clone and Konami's Green Beret, and a demo of creating a platform hero.

Make Your Own Game with RPG Maker. AGS. Download AGS Which version of Windows are you running? 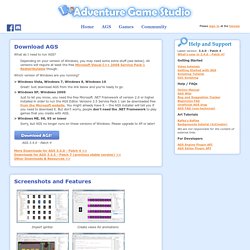 > Windows Vista, Windows 7, Windows 8 Great! Just download AGS from the link below and you're ready to go. > Windows XP, Windows 2000 Just to let you know, you need the .NET Framework 2.0 or higher installed in order to run the AGS Editor (link is to version 3.5). > Windows ME, 98, 95 or lower Sorry, but AGS no longer runs on these versions of Windows. Screenshots and Features Import sprites Create views for animations Draw room walkable areas Script with auto-complete The AGS Editor is a Windows-based IDE for creating your games as quickly and easily as possible. Develop AGS So you want to help develop future versions of the AGS engine and / or editor? Resources Need a hand to get you started? Visionaire Studio - the Adventure Game Creator.

Visionaire Engine Dear Visionaire-ites, it has been a long time coming... 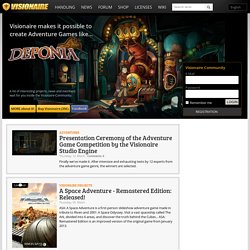 After several exhausting months - for the devs, not us - of hard work, sweat, tears, & stubborn determination, we have finally reached the next big milestone, in our quest for the ultimate adventure game engine. We are proud to present Visionaire Studio 4.0 beta, the [i]cross-platform[/i] edition of our game engine. Visionaire Studio 4.0 offers many new & exciting features, such as: a [i]native[/i] editor for the [b]mac[/b]. Export options for [b]windows[/b], [b]mac[/b], [b]iOS[/b], & [b]android[/b], 3D character support, an updated walk system, which makes it possible to create a more natural looking walk cycle. Wintermute Engine » features. Wintermute Engine is literally packed with various features to provide the game developers with as much flexibility as possible. 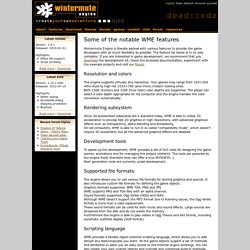 The feature list below is in no way complete; If you are interested in game development, we recommend that you download the development kit, check the enclosed documentation, experiment with the example projects and visit our forum. Resolution and colors The engine supports virtually any resolution. Your games may range from 320×200 retro-style to high-res 1024×768 (and more) modern looking ones. Both 16bit (hicolor) and 32bit (true color) color depths are supported. Rendering subsystem Since 3D accelerated videocards are a standard today, WME is able to utilize 3D acceleration to provide fast 2D graphics in high resolutions, with advanced graphical effects such as transparency, alpha blending and antialiasing. The Ren'Py Visual Novel Engine. Twine / An open-source tool for telling interactive, nonlinear stories.

Home : Inform. ADRIFT: Create your own Interactive Fiction. Godot Engine. Flixel a flash game library and coding community - Homepage. HaxeFlixel 2D Game Framework. FlashPunk: A game creation library for Actionscript 3. Phaser - Examples. Polycode. Turbulenz - Developers. The SDK contains everything a developer needs to rapidly get their project going, polished and deployed, including: A complete version of the JavaScript Engine code is available for developers to browse and use during debugging. 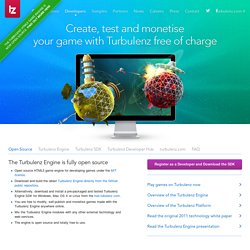 The Engine is completely modular allowing developers to select exactly what features they want to use, and modify or replace anything that isn't suitable for their game. The SDK includes a wide range of feature and code samples. The aim of these samples is to cleanly demonstrate to developers how to use all the different parts of the game engine. All of the code is fully documented and explained, and suitable to paste into your own project as a starting point for getting a new feature implemented. A complete set of the latest documentation is distributed in the SDK. The Local server replicates all the APIs provided by the live game servers. Built into the Local server are a collection of tools for debugging the game and assets. 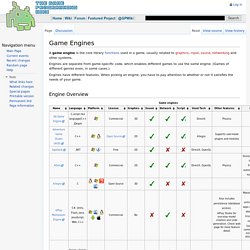 Engines are separate from game-specific code, which enables different games to use the same engine. (Games of different genres even, in some cases.) Engines have different features. When picking an engine, you have to pay attention to whether or not it satisfies the needs of your game. List of game engines. Many tools called game engines are available for game designers to code a game quickly and easily without building from the ground up. 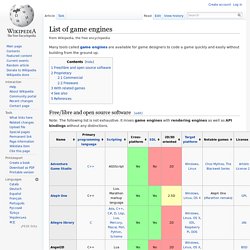 Free/libre and open source software[edit] Note: The following list is not exhaustive. It mixes game engines with rendering engines as well as API bindings without any distinctions. Proprietary[edit] Commercial[edit] Freeware[edit] Scratch - Imagine, Program, Share. Store - Make games together with CraftStudio. The Big List of Game Making Tools. Create an Android/iOS Game Without Knowing How to Code. Did you know that you don’t need to know how to code to create amazing android and iOS games? 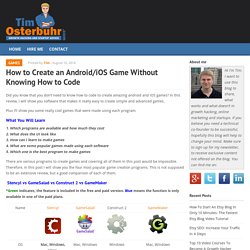 In this review, I will show you software that makes it really easy to create simple and advanced games. Plus I’ll show you some really cool games that were made using each program. What You Will Learn. Emo-framework - open source game engine for Android and iOS. ShiVa 3D Game engine with development tools. One-Stop Android Game Development Solution. Accelerated development time, incredible support, and massive distribution within Papaya's Social Network helped our game become a huge hit on Android. - LoL Studio Creator of Cafe Fever AppFlood provided us with quality installs when we needed it. 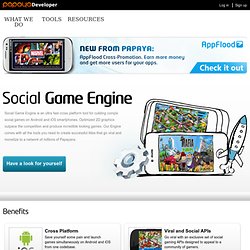