Where Law Ends review: why Mueller failed to hold Trump to account. The Mueller investigation ended a year and a half ago, but the aftershocks never stopped. 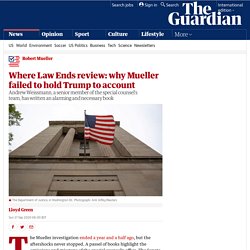 A passel of books highlight the omissions and missteps of the special counsel’s office. The Senate intelligence committee report fills in some of the gaps on Russian interference in the 2016 election. The Apprentice review: Trump, Putin and the subversion of US democracy. Still not convinced the Russians colluded with Donald Trump to make sure he became president of the United States? 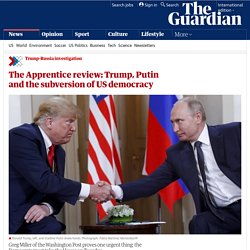 Greg Miller, national security correspondent of the Washington Post, suggests that you consider this: Imagine a scenario in which US national security agencies uncovered secret communications between a powerful political candidate and a foreign adversary. Active Measures review: how Trump gave Russia its richest target yet. The president-elect arrived in Washington under a cloud manufactured in Moscow and St Petersburg. 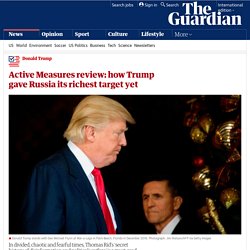 Less than a month after Donald Trump took office, the national security adviser Michael Flynn was ousted for lying to the vice-president about a conversation with Russia’s ambassador. Trump calls Russia deal 'legal and cool' as Mueller inquiry gathers momentum. Donald Trump, drawn deeper into an investigation into Russian meddling in US elections, has defended his pursuit of a business deal in Moscow at the same time he was running for president as “very legal & very cool”. 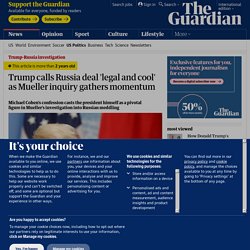 Mueller report: special counsel delivers findings of Trump-Russia inquiry. Robert Mueller has completed his Trump-Russia investigation without prosecuting additional associates of the president, and has reported his findings to William Barr, the US attorney general. 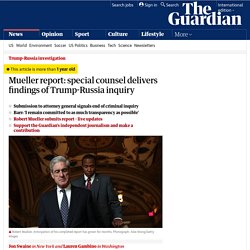 Barr said in a letter to senior members of Congress on Friday afternoon he had received a report from Mueller, the special counsel, and expected to be able to inform them of its main conclusions “as soon as this weekend”. The attorney general said he would consult Mueller and Rod Rosenstein, the deputy attorney general, to determine what information from the report could be released to the public . “I remain committed to as much transparency as possible,” Barr wrote, adding that he was constrained by law and justice department rules. Senior Democrats and Republicans called for Barr release the report in full. The White House press secretary, Sarah Sanders, said Trump had not been briefed on the report. Trump escalates attacks on FBI as he fights back against Russia inquiry. Donald Trump has dramatically escalated his attacks on the FBI’s investigation into Russian interference in the US election, and his fightback against the Department of Justice reached a turning point this week with aspects of the inquiry itself now being investigated. 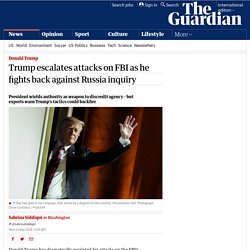 The president’s growing frustration with special counsel Robert Mueller’s inquiry now appears to be having an impact at high levels – as experts warned that Trump’s fresh offensive could backfire, and the former FBI director James Comey counter-punched. Trump’s manoeuvring came as reports indicated an FBI informant was in contact with several Trump campaign officials in 2016. Compromised review: Peter Strzok on Trump, Russia and the FBI.

As a deputy assistant director of the FBI’s counter-intelligence division, Peter Strzok led the bureau’s investigation of Russian interference in the 2016 election. 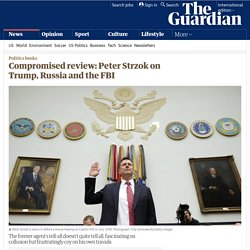 His criticisms of Donald Trump, sent via a government-issued phone, were leaked together with his affair with Lisa Page, an FBI lawyer. He offers a window into FBI counter-intelligence work, a defense of his conduct, and a scathing indictment of the president and his administration. Compromised is a significant contribution to the library of Trump tell-alls. It is not dull. Under the subtitle “Counterintelligence and the Threat of Donald J Trump”, Compromised offers a firsthand account by a career FBI agent and former soldier, delivered in the aftermath of the Russia report issued by the Senate intelligence committee, Bob Woodward’s Rage, and Michael Schmidt’s Donald Trump v the United States. The Senate committee reported that Paul Manafort, Trump’s campaign manager, worked hand-in-glove with a Russian intelligence officer. Where Law Ends review: why Mueller failed to hold Trump to account. Who Owns Kavanaugh #1: The Justice & The Replacement - clareluxor - Gmail.

Obama wanted to close Gitmo. Will Biden be able to finally do it? Look at the Capitol Hill rioters. Now imagine if they had been black. By now, the world has witnessed white rioters seize the Capitol building in Washington DC. 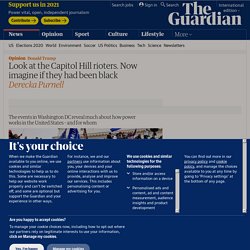 After hearing Donald Trump encourage them to reject the presidential election’s outcome, thousands reportedly pushed through cops to storm ongoing congressional debates and reign supreme over politicians who fearfully scurried out of the halls of power. 'No good deed goes unpunished': Accused Arbery killer can't keep quiet, so insert ridiculous defense. Hong Kong Protesters Who Fled by Boat Are Sentenced to Prison in China. HONG KONG — A group of Hong Kong protesters who were arrested by the Chinese authorities while fleeing the city by speedboat were sentenced by a mainland court to between seven months and three years in prison on Wednesday, in the Chinese Communist Party’s latest offensive against pro-democracy activists. 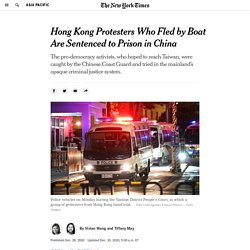 The case of the 12 protesters, who were caught in August by the Chinese Coast Guard while trying to seek refuge in Taiwan, was closely watched by Hong Kong’s beleaguered opposition movement. He spent 10 days in jail after facial recognition software led to the arrest of the wrong man, lawsuit says. Editor’s note: This article has been updated to remove the name of a facial recognition software firm. 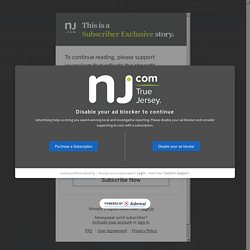 It is unknown which facial recognition program was used to identify Nijeer Parks. It has also been updated to include a statement from the New Jersey Attorney General’s Office. When Nijeer Parks walked out of a New Jersey prison in 2016, he returned to his family in Paterson and told them he was done messing up his life. Twice convicted for selling drugs, Parks spent six years behind bars and said he decided after his release to earn an honest living. How Does an 83-Year-Old Jesuit End Up in Prison? More striking — and more telling of the attitude of the authorities — was a much shorter document, running to about a page and half, released to the press on Nov. 29. It was issued weeks after Father Swamy’s lawyers went to court asking that he be provided with the inexpensive objects he needs at mealtimes.

“When Stan was arrested, one of his associates handed over his clothes and the sipper to the N.I.A. officials,” said Mihir Desai, one of his lawyers. But then, about a month after his arrest, the lawyers learnt that Father Swamy hadn’t been reunited with his straw and sipper. Reliant on his increasingly unstable hands, he was struggling. The lawyers went to court on Nov. 6, asking that the priest be given what he needs. The N.I.A. took 20 days to respond, a delay that the agency attributed to legal procedure. Yet in the intervening period, nobody thought to provide Father Swamy with any old straw and sipper. How Cities Lost Control of Police Discipline. The 83-page contract between Columbus and its police union shows how arbitration works there, similar to many other cities. Massachusetts Judge Overturns Murder Conviction, Citing ‘Racial Animus’ in Prosecutors’ Emails. With that motion, Ms. Choy was officially exonerated and freed after 17 years in detention, according to her lawyers, John J.

Barter and Sharon Beckman, a professor at Boston College Law School and director of the Boston College Innocence Program. A Leading Cause for Wrongful Convictions: Experts Overstating Forensic Results. More than 150 men and women in American prisons were exonerated in 2018, according to a recent report by a registry that tracks wrongful convictions. Killed by police, then vilified: how America's prosecutors blame victims.

One year after police killed Stephon Clark in his family’s backyard, law enforcement officials launched a different kind of assault on the 22-year-old. Black People More Likely to Be Wrongfully Convicted of Murder, Study Shows. Black people convicted of murder or sexual assault are significantly more likely than their white counterparts to be later found innocent of the crimes, according to a review of nearly 2,000 exonerations nationwide over almost three decades. The First Photos of Enslaved People Raise Many Questions About the Ethics of Viewing. Police or Prosecutor Misconduct Is at Root of Half of Exoneration Cases, Study Finds.

Mr. ‘A Stain on the City’: 63 People’s Convictions Tossed in Chicago Police Scandal. In 2012, a Chicago police sergeant and an officer were arrested in an undercover operation for stealing $5,200 from a person carrying what they thought was cash for drug dealers. Microsoft Word - Exonerations in 2018.docx - Exonerations in 2018.pdf. Tennessee Pastor Who Repeatedly Raped Daughter, 14, Gets Light Sentence Because Jesus. Nothing says “good Christian man” like rape and incest: Tennessee Pastor David Richards received a light sentence after being convicted of repeatedly raping his 14-year-old daughter. Archaeologists Finally Know What Happened at This Brutal Reform School.