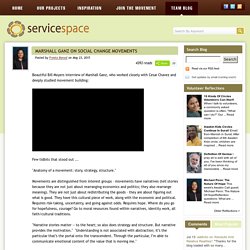 "Anatomy of a movement: story, strategy, structure. " Movements are distinguished from interest groups – movements have narratives (tell stories because they are not just about rearranging economics and politics; they also rearrange meaning). They are not just about redistributing the goods – they are about figuring out what is good. They have this cultural piece of work, along with the economic and political. "Narrative stories matter -- to the heart; so also does strategy and structure. "12th century Jewish philosopher Maimonides said that hope is belief in plausibility of the possible, as opposed to the necessity of the probable. 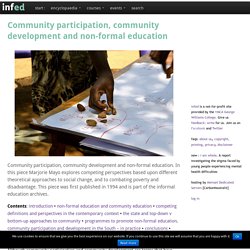 In the post-Second World War period, community development was defined as a ‘movement designed to promote better living for the whole community with the active participation and on the initiative of the community’. This definition arose in the context of strategies to promote development in Britain’s colonies (Report of the Ashridge Conference, 1954, quoted in du Sautoy 1958: 2). 374480253. The Community Canvas. Broadcast Yourself. My CodeConf Talk: Your Community Is Your Best Feature. Had a blast this weekend at GitHub's inaugural conference, CodeConf, where I got to give a new talk on building community around open source software based on my experience at Expert Labs running ThinkUp. 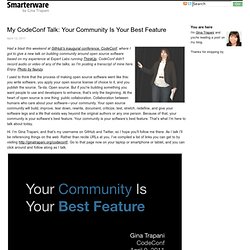 CodeConf didn't record audio or video of any of the talks, so I'm posting a transcript of mine here. Enjoy. Photo by faunzy. I used to think that the process of making open source software went like this: you write software, you apply your open source license of choice to it, and you publish the source. Ta-da. Hi. Now, I've got to be upfront with you. Back in early 2009 I’d just finished a four year stint writing a web site about productivity software called Lifehacker. I only had this vague notion of what went on behind the scenes. How Creative Mornings Runs Their 106 Monthly Chapters. For six months in a row, I told myself I’d wake up at 6AM and get out the door to a monthly CreativeMornings event. 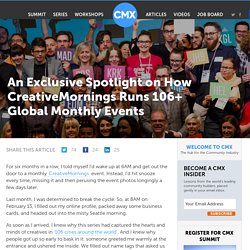 Instead, I’d hit snooze every time, missing it and then perusing the event photos longingly a few days later. Last month, I was determined to break the cycle. Scaling Facebook Groups — HS Hackers. It’s been a little over 9 months since my baby was conceived, which is pretty impressive considering I don’t have a womb or any female reproductive anatomy. 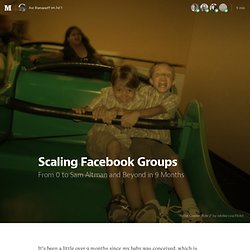 That’s because I’m talking about a virtual birth, one which I’ve had the luck, privilege, and sometimes duty, to have brought into this world. It’s been one hell of a ride—in the course of a school year, our group has grown to include high schoolers from all 50 states and more than a dozen countries, organizers from nearly every major U.S. college hackathon, newly-minted founders of high school hackathons and hacker meetups, and yes, even the president of Y Combinator.

Brick By Brick: A free guide to building awesome communities. 5 Ingredients for Building Community. Over the past few years, people often ask how Designer Fund has built a community of over 100 top designers including founders, leads and angels. 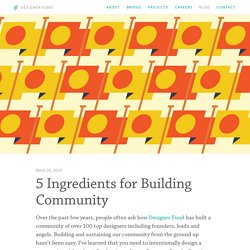 Building and sustaining our community from the ground up hasn’t been easy. I’ve learned that you need to intentionally design a community with at least five key ingredients: Purpose, People, Practice, Place, and Progress. People naturally gravitate to communities that represent their values and beliefs. The mission behind an organization is fundamental to our personal narrative of “why” we should spend our time and money toward it. Just look at any religion, cause, brand or company you care about. For example, Designer Fund believes the world needs better designed products and services especially in markets that traditionally lack design innovation like education, health, and energy. A purpose statement can only go so far. 8 Overlooked Elements Every Online Community Should Have. Digital Engagement Framework. Digital engagement in culture heritage and the arts.1.

Digital engagement booklet (1) Hierarchy of Social Participation. As part of the article I’m working on for the and Social Issues on using web 2.0 to promote civic discourse in museums, I’m developing an argument about the “hierarchy of social participation.” 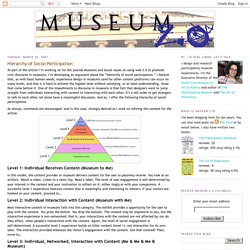 I believe that, as with basic human needs, experience design in museums (and for other content platforms) can occur on many levels, and that it is hard to achieve the highest level without satisfying, or at least understanding, those that come before it. One of the impediments to discourse in museums is that fact that designers want to jump straight from individuals interacting with content to interacting with each other. It’s a tall order to get strangers to talk to each other, let alone have a meaningful discussion. And so, I offer the following hierarchy of social participation. As always, comments are encouraged—and in this case, strongly desired as I work on refining this content for the article. Level 1: Individual Receives Content (Museum to Me) This is the level where web 2.0 sits. 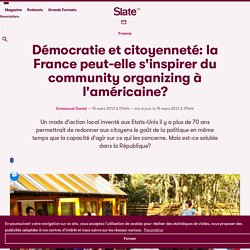 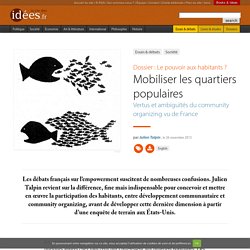