How We Grieve: Meghan O’Rourke on the Messiness of Mourning and Learning to Live with Loss. By Maria Popova. 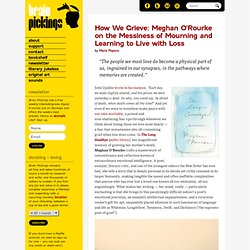 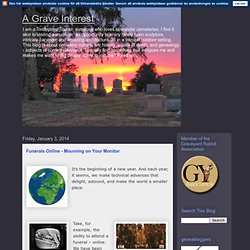 And each year, it seems, we make technical advances that delight, astound, and make the world a smaller place. Take, for example, the ability to attend a funeral – online. We have been able to watch the funerals of celebrities and political figures on television for years; now we can “attend” a virtual funeral. Zen & the Art of Dying. 'Corporatization' Of Death Has Some Looking For Funeral Alternatives. Twenty strangers sit at tables scattered throughout the first floor of a Victorian house. 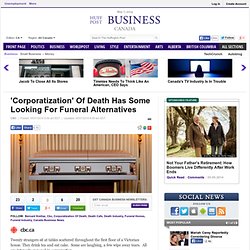 They drink tea and eat cake. Some are laughing, a few wipe away tears. All are intensely engaged in conversation. Welcome to the Death Café. The concept originated with Swiss sociologist Bernard Krettaz several years ago. Infinity Mushroom « The Infinity Burial Project. The Infinity Mushroom (in progress) will be a unique strain(s) of fungi that will be trained to decompose bodies and remediate the industrial toxins in bodies. 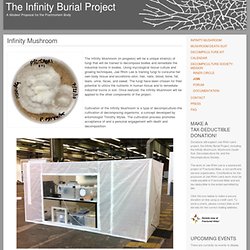 Using mycological tissue culture and growing techniques, Jae Rhim Lee is training fungi to consume her own body tissue and excretions–skin, hair, nails, blood, bone, fat, tears, urine, feces, and sweat. The fungi have been chosen for their potential to utilize the nutrients in human tissue and to remediate industrial toxins in soil.

Once realized, the Infinity Mushroom will be applied to the other components of the project. CINDEA. Introduction to CINDEA CINDEA is a Canadian-based organization, which respects the wisdom of ancient death traditions and encourages the renewal of older death practices that are appropriate to our modern-day life. 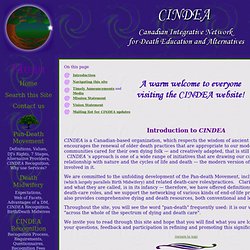 In the past, communities cared for their own dying folk — and creatively adapted, that is still an option available to us. CINDEA 's approach is one of a wide range of initiatives that are drawing our culture into a deeper relationship with nature and the cycles of life and death — the modern version of "a good death" for all involved in it. PanelPicker. Voting period for this idea type has passed More and more of what we do, see, and create is collected digitally. 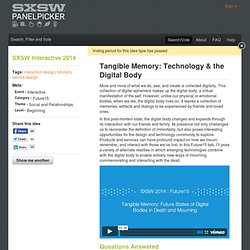 This collection of digital ephemera makes up the digital body, a virtual manifestation of the self. The Order of the Good Death. “Society is like a stew. 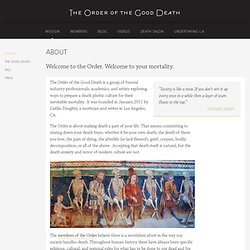 If you don’t stir it up every once in a while then a layer of scum floats to the top.”Edward Abbey. OrderoftheGoodDeath. Death doulas: helping people face up to dying. The woman sitting opposite me in an Edinburgh cafe is called Rebecca Green. 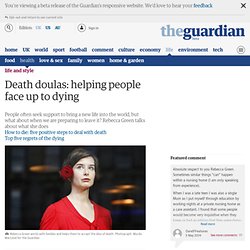 She is in her early 40s, with a soft Birmingham accent and a gentle, smiling face. She is a nurse. But she also does something else – something that has prompted both fascination and animosity in those she has told about it. This Business of Death: “Death Doulas” Olivia Rose Bareham, a death midwife who helps people plan home funerals, shows items in her “death kit.” 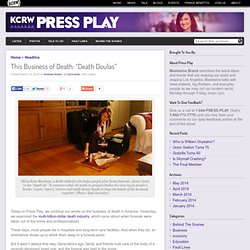 It contains what she needs to prepare bodies for viewing in people’s homes: wipes, razors, lotions and small elastic bands to keep the hands of the deceased together. (Photo: Saul Gonzalez) Today on Press Play, we continue our series on the business of death in America. Yesterday, we examined the multi-billion-dollar death industry, which came about when funerals were taken out of the home and professionalized.

These days, most people die in hospitals and long-term care facilities. But it wasn’t always that way. Now we’re seeing a small but growing movement of people who want to go back to the way it used to be. KCRW’s Saul Gonzalez visited the home of a dying man and met the woman who’s helping him plan his at-home funeral. Mourning, Grieving, and Discussing Death in the Digital Sphere. An-online-generation-redefines-mourning. Photo In 2010, when Rebecca Soffer’s father died of a heart attack on a cruise to the Bahamas, the condolence notes came pouring in, many in the form of text messages. 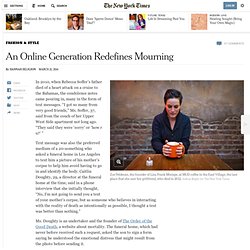 “I got so many from very good friends,” Ms. Virtual life after death. On 20 May 2010 an event known as "Digital Death Day" brought together the businesses of social networking, data management and death care. One of its organisers, Jennifer Holmes, says: "We have reached a critical mass of personal data online. " She is referring to the billions of pages held by Facebook and other social networking sites, as well as blogs, online gaming sites... basically anything into which we put data... data which, in most cases, remains after we die. So what should happen to it? "There's no standard practice across the industry yet. Modern Loss - Candid conversation about grief. Beginners welcome. Lagerkvist_NewMemoryCultures_Than2:22013 - lagerkvist_newmemorycultures_than2220133.pdf.

A Younger Generation Finds a New Place To Talk About Mourning. When I met Rebecca Soffer and Gabrielle Birkner last month in the lobby of an Upper West Side apartment complex, they were ensconced in talk of due dates and cramped apartments and the creative reuse of dog crates. Soffer, 37, and Birkner, 34, were both pregnant, with Soffer due to give birth any day—she gave birth to her son shortly before Christmas—and Birkner due to follow soon behind her. Amid all the bubbly talk and the excitement of bringing new life into the world, one would be hard-pressed to recognize that these two women spend much of their time lately thinking about death. Soffer and Birkner both endured the loss of their parents at early ages. But they have channeled their grief into a new website called Modern Loss, intended as a forum for twenty- and thirtysomethings struggling with grief and mourning. TEDxGallatin - Aaron Uhrmacher - Digital Death, Online Afterlife.

Online Memorial Services: After a Death, Celebrating a Life Online. Selfies at funerals and memorial hashtags: mourning in the digital age. How do we deal with death in the digital age? In recent weeks and months, social media has been unremittingly macabre, reacting to the passing of artists, public figures and political heroes. Lou Reed. Nelson Mandela. Philip Seymour Hoffman. Bob Crow. Conversations on the Culture of Mortality and Mourning. Welcome to Death Cafe. Mourning through Digital Story Sharing. Personal Stories. Lunch The most important thing I have figured out is that I am going to go after my dreams and stop waiting on the sidelines while everyone else gets the things they want.

Read More... After Years of Anticipatory Grief Fear of loss no longer holds me in such a tight grip. Read More... A Father’s Perspective: How Early and Later Grief Are Different Based on my own experiences, I would like to illustrate some differences I have discovered between the early and later stages of my journey, using specific essentials that I believe are common to the experience of all bereaved individuals. Read More... Getting “Closer” … When You Thought it was Already “Closed” I challenge you to write to your loved ones. Read More... Birthdays and the “Could Have Beens” I should try to just celebrate that 14 years ago in my history, a young man came into this world who would change who I was, what I would become. Read More... Stories from The Heart of Grief.

The Heart of Grief is filled with personal stories of journeys in grief toward lasting love for a family member, companion, or friend. Stories of love disrupted but not ended by death. Stories of learning to carry the hurt of missing loved ones, cherishing the gifts they have left us, finding hope, and saying yes to life. Many of you who visit this website have lived such stories. Surely they are among the most precious stories you hold within you. The Story Behind Wonderland - Kirsty Mitchell Photography. Photo diary: a sister battles breast cancer. Sara cries as she kisses the hand of her mother in hospital on April 11. Stories from the Road. Cancer Doctor Peter Bach on Losing His Wife to Cancer -

The streetlights in Buenos Aires are considerably dimmer than they are in New York, one of the many things I learned during my family’s six-month stay in Argentina. Dear Gram. In memory of My Gram. Our last tomatoes. Gram close up.