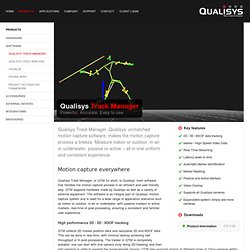 Measure indoor or outdoor, in-air or underwater, passive or active – all in one uniform and consistent experience. Motion capture everywhere Qualisys Track Manager, or QTM for short, is Qualisys’ main software that handles the motion capture process in an efficient and user friendly way. QTM supports hardware made by Qualisys as well as a variety of external equipment. The software is an integral part of Qualisys’ motion capture system and is used for a wide range of application scenarios such as indoor or outdoor, in-air or underwater, with passive markers or active markers, real-time or post-processing, ensuring a consistent and familiar user experience. High performance 2D / 3D / 6DOF tracking QTM collects 2D marker position data and calculates 3D and 6DOF data. 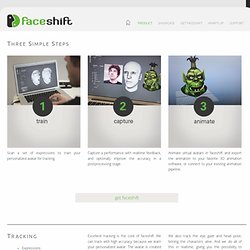 We can track with high accuracy, because we learn your personalized avatar. The avatar is created from a few training expressions, and the resulting tracking is very stable, accurate and expressive. We are tracking 48 blendshape parameters, which allows us to capture even small emotions. We also track the eye gaze and head pose, brining the characters alive. Integration File BasedAnimation Export (fbx)Blendshape Curves Export(fbx,bvh,ascii)Virtual Marker Export(bvh,ascii)Plugin BasedMayaMotion BuilderTCP/IP streaming via open format All excellence at tracking is useless, if it is not easy to get the results onto your own rigs, in your own workflow. 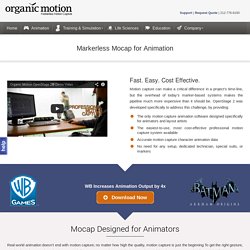 The latest features in OpenStage animation software make this easier than ever. Animators can work with reference footage from any or all of the OpenStage 2 cameras in the animation tool of their choice, such as AutoDesk Maya(TM) or AutoDesk 3D Studio MAX. Export the camera locations and orientations in an FBX format, import the reference frames as image planes and start customizing the action to suit the needs of the character and story. Motion Capture Software and Systems Information – Organic Motion. The first technology-based, systematic studies of motion were conducted by Eadweard Muybridge in the 19th century, before the advent of cinematography, and served for decades as the basis for understanding how humans and animals move. 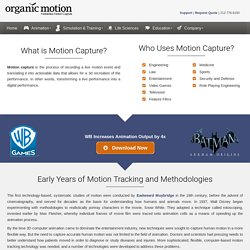 In 1937, Walt Disney began experimenting with methodologies to realistically portray characters in the movie, Snow White. They adopted a technique called rotoscoping, invented earlier by Max Fleisher, whereby individual frames of movie film were traced onto animation cells as a means of speeding up the animation process. By the time 3D computer animation came to dominate the entertainment industry, new techniques were sought to capture human motion in a more flexible way. But the need to capture accurate human motion was not limited to the field of animation. Doctors and scientists had pressing needs to better understand how patients moved in order to diagnose or study diseases and injuries.