Magnum’s moment of reckoning. In the nearly three years since the #MeToo movement transformed journalism, Magnum Photos, the world’s most prestigious photo agency, has portrayed itself as an industry leader. 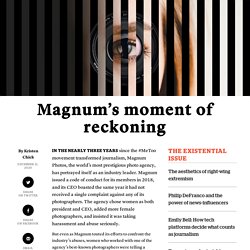 Magnum issued a code of conduct for its members in 2018, and its CEO boasted the same year it had not received a single complaint against any of its photographers. The agency chose women as both president and CEO, added more female photographers, and insisted it was taking harassment and abuse seriously. But even as Magnum touted its efforts to confront the industry’s abuses, women who worked with one of the agency’s best-known photographers were telling a different story. Photography - David Campbell. “Photography” is a large and complex phenomenon, with diverse histories, driven by everything from aesthetics to technology. 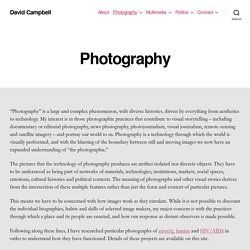 My interest is in those photographic practices that contribute to visual storytelling – including documentary or editorial photography, news photography, photojournalism, visual journalism, remote-sensing and satellite imagery – and portray our world to us. Photography is a technology through which the world is visually performed, and with the blurring of the boundary between still and moving images we now have an expanded understanding of “the photographic.”

The pictures that the technology of photography produces are neither isolated nor discrete objects. 'He never hit her in front of me again' – Donna Ferrato's domestic abuse photos. For nearly four decades, the photojournalist Donna Ferrato has documented the effects of domestic violence on abused women and their families. 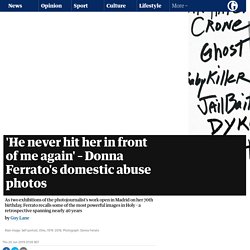 Her book and series Living with the Enemy is one of the most important works on the subject. She launched a campaign in 2014 called I Am Unbeatable, which features women who have left their abusers. In 1981, Ferrato was commissioned by Playboy magazine in Japan to document the supposedly hedonistic lifestyle of Elisabeth and Bengt, a couple of New Jersey swingers.

Ferrato’s pictures told a different story – the most famous of which, below, is included in Time magazine’s 100 most influential images of all time. Here, she tells the stories behind some of the most potent images in the collection. Photojournalist Shahidul Alam Vows to Continue Fight - Matter of Fact with Soledad O'Brien. A Photographer Goes Missing in China. Richard Mosse.

A former refugee’s moving photos of a crisis that he knows so well. (Sinawi Medine) It was like looking in a mirror. 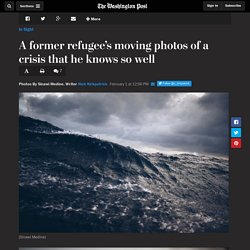 Years ago, he had taken the same long and painful journey. He fled his country, leaving his home and family. NO CAPTION NEEDEDNO CAPTION NEEDED - ICONIC PHOTOGRAPHS, PUBLIC CULTURE, AND LIBERAL DEMOCRACY. French newspaper removes all images in support of photographers. “A visual shock. 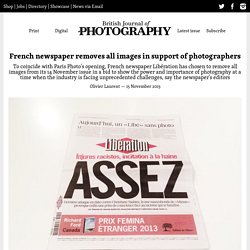 For the first time in its history, Libération is published without photographs. Definition: Photography and Ethics. Photographic Ethics Ethics is about the moral principles that people work with. Societies, countries, groups all have ways of deciding what is right and wrong. ‘Correctness’ or acceptable conduct is one of the outcomes of ethics. Benjamin Krain - Photojournalist. 2013 in Photojournalism. May 5, 2013. 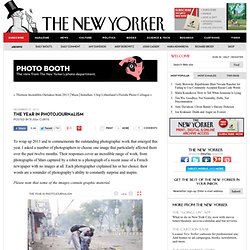 Dhaka, Bangladesh. An activist tries to take another severely injured activist to the hospital. Marrakech: The city that distrusts photographers. The English photographer Mark Power, who is quiet, self-effacing and a bit shy, is telling me what happened when he went out shooting on the streets of Marrakech with his American colleague Jim Goldberg, who is none of these things. 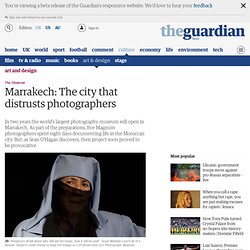 "Jim was having a pretty hard time.

John Moore's Photos of Deportees. Almost every day of the week in places like Mesa, Ariz., federal authorities send planes filled with deportees back to Central America. 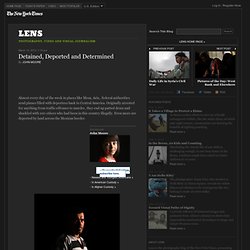 Originally arrested for anything from traffic offenses to murder, they end up patted down and shackled with 100 others who had been in this country illegally. Even more are deported by land across the Mexican border. During President Obama’s first term of office, authorities deported a record 1.5 million people. A majority fell into several categories — those who had recently crossed United States borders illegally, repeat violators of immigration laws and those with a criminal record, according to the White House. 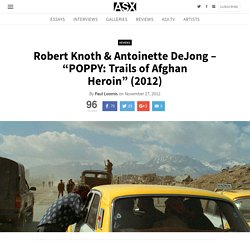 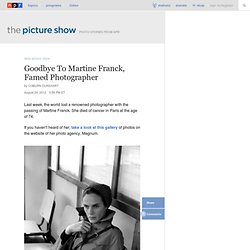