Growing up without a father figure. Talking Back to Hate. Marriage, Divorce, Single Motherhood. How to effectively manage the impact of the #MeToo movement in the workplace. Over the past two years of #MeToo, employers learned to take sexual harassment complaints seriously and conduct prompt and thorough investigations. 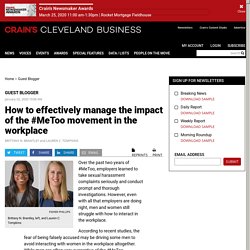 However, even with all that employers are doing right, men and women still struggle with how to interact in the workplace. According to recent studies, the fear of being falsely accused may be driving some men to avoid interacting with women in the workplace altogether. While men are often very supportive of the #MeToo movement and combating sexual harassment, they fear becoming part of the wide net cast by the movement and they grapple with how to work in what some feel is an overregulated workplace. For example, recent studies have shown male bosses increasingly ignoring female co-workers or refusing to hire female employees, and male employees avoiding interacting with female co-workers in social settings, mentorship relationships and one-on-one meetings. 1. 2.

Search engine. #MeToo Movement. False Feminism: How we got from sexual liberation to #MeToo - American Experiment. This essay was published in the February 2019 issue of First Things. 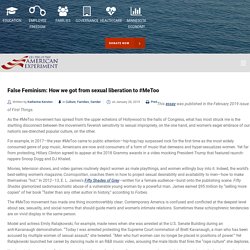 As the #MeToo movement has spread from the upper echelons of Hollywood to the halls of Congress, what has most struck me is the startling disconnect between the movement’s feverish sensitivity to sexual impropriety, on the one hand, and women’s eager embrace of our nation’s sex-drenched popular culture, on the other. For example, in 2017—the year #MeToo came to public attention—hip-hop/rap surpassed rock for the first time as the most widely consumed genre of pop music.

Americans are now avid consumers of a form of music that demeans and hyper-sexualizes women. Yet far from protesting, Hillary Clinton agreed to appear at the 2018 Grammy awards in a video mocking President Trump that featured raunch-rappers Snoop Dogg and DJ Khaled. Movies, television shows, and video games routinely depict women as male playthings, and women willingly buy into it. What Most Women Are Afraid To Say About The #MeToo Movement - Swaay. Following are excerpts from "Unleash the Girls, The Untold Story of the Invention of the Sports Bra and How It Changed the World (And Me)" By Lisa Z. 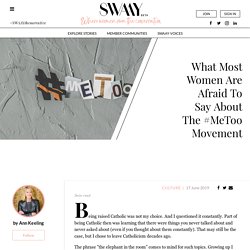 Lindahl There is an idea that has popped up everywhere from Chaos Theory to Science Fiction and New Age memes known popularly as the "Butterfly Effect. " #MeToo. Men and Women. Post-Me Too, Male Bosses Are Afraid To Meet Female Employees. 50 Best Wedding Quotes About Love To Use When Writing Your Own Marriage Vows (2019) Make your "I do" mean something as special as your love for each other. 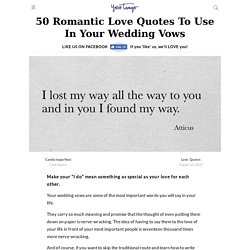 Marriage and relationship. Fathers and Fathering. DuckDuckGo — Privacy, simplified. Marriage Strike. Consent Form. "Men and women can't be friends because the sex thing always gets in the way. 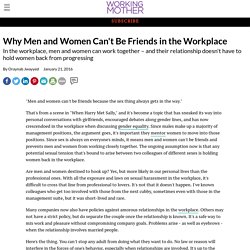 " That's from a scene in "When Harry Met Sally," and it's become a topic that has sneaked its way into personal conversations with girlfriends, encouraged debates along gender lines, and has now crescendoed in the workplace when discussing gender equality. Since males make up a majority of management positions, the argument goes, it's important they mentor women to move into those positions. Since sex is always on everyone's minds, it means men and women can't be friends and prevents men and women from working closely together. The ongoing assumption now is that any potential sexual tension that's bound to arise between two colleagues of different sexes is holding women back in the workplace. Are men and women destined to hook up? Many companies now also have policies against amorous relationships in the workplace. Tips For Dating After #MeToo. You searched for Metoo. 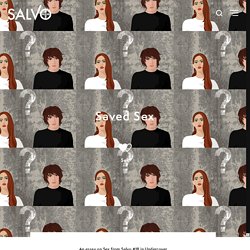 The governor of our state had just signed legislation stripping abortion giant Planned Parenthood of about $4 million in annual taxpayer funding. "First, you do not want to teach sex-ed and provide condoms in schools. Second, you do not want to fund an organization that provides contraception to prevent pregnancy. Mastering Modern Love by Terrell Clemmons - Salvo Magazine. Every February the New York Times invites college students nationwide to submit personal stories for its annual Modern Love College Essay Contest. 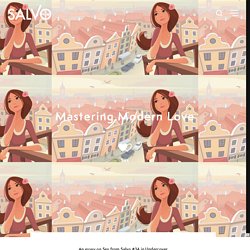 If you go to the homepage for the contest, you'll see pretty multicolored hearts floating gently above the text. But if you go to read the 2015 winning essay, the picture you'll get is not so neat or sweet. What you'll see is a modern heart that is broken, bruised, and mournfully confused. "No Labels, No Drama, Right? " Backlash (#MeeToo) The MeToo BACKFIRE Is Only Getting Worse For Women. Article. Conservative lobby group blames 'family malformation' - including parental breakups - as major culprit. 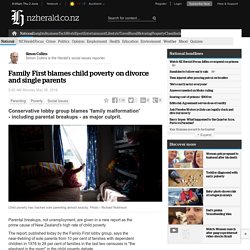 Parental breakups, not unemployment, are given in a new report as the prime cause of New Zealand's high rate of child poverty. The report, published today by the Family First lobby group, says the near-trebling of sole parents from 10 per cent of families with dependent children in 1976 to 28 per cent of families in the last two censuses is "the elephant in the room" in the child poverty debate.

Child poverty has tracked sole parenting almost exactly. Children in homes earning below 60 per cent of the median household income rose from 14 per cent in 1982 to 30 per cent in 2001, then declined to 22 per cent by 2007, although they have risen again recently. "The correlation between sole parent and child poverty rates is stronger than between unemployment and child poverty rates," says the report, by welfare commentator Lindsay Mitchell. Continued below. Social inequality’s deepening roots. FILE - In this June 1, 2011 file photo, a group of students walk through the Sather Gate on the University of California, Berkeley campus in Berkeley, Calif. 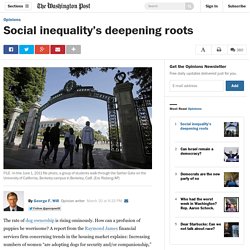 (Eric Risberg/AP) The rate of dog ownership is rising ominously. How can a profusion of puppies be worrisome? A report from the Raymond James financial services firm concerning trends in the housing market explains: Increasing numbers of women “are adopting dogs for security and/or companionship,” partly because of “the great education divide.” Since 1979, the report says, the number of women going to college has accelerated relative to male enrollments. George F. Facebook In 2000, the adult populations of college-educated men and women were approximately equal.