Is There Really a Fatherhood Crisis?: The Independent Review: The Independent Institute. Virtually every major social pathology has been linked to fatherless children: violent crime, drug and alcohol abuse, truancy, unwed pregnancy, suicide, and psychological disorders—all correlating more strongly with fatherlessness than with any other single factor. 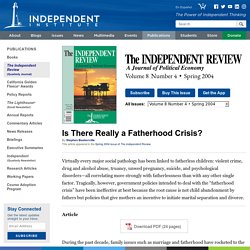 Tragically, however, government policies intended to deal with the “fatherhood crisis” have been ineffective at best because the root cause is not child abandonment by fathers but policies that give mothers an incentive to initiate marital separation and divorce. Article During the past decade, family issues such as marriage and fatherhood have rocketed to the top of the domestic-policy agenda. The past two presidential administrations, along with numerous local governments, have responded to the continuing crisis of the family by devising measures to involve governmental machinery directly in the management of what had previously been considered private family life.

Other studies have reached similar conclusions. Why are sitcom dads still so inept? Look at Homer Simpson. Text Size: 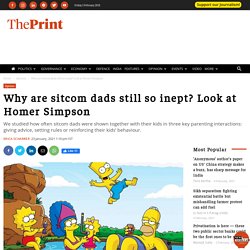 Physical play with fathers may help children control emotions, study finds. Children whose fathers spend time playing with them at a very early age may find it easier to control their behaviour and emotions, which has a beneficial impact as they get older and start school, according to a new study. 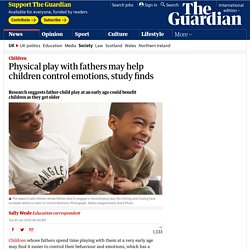 The Science of Dad and the ‘Father Effect’ The impact of fatherhood is not subjective, but an objective and documented phenomenon. 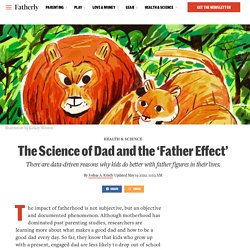 Although motherhood has dominated past parenting studies, researchers are learning more about what makes a good dad and how to be a good dad every day. So far, they know that kids who grow up with a present, engaged dad are less likely to drop out of school or wind up in jail, compared to children with absent fathers and no other male caretakers or role models. When kids have close relationships with father figures, they’re less likely to have sex at a young age and tend to avoid other high-risk behaviors.

They’re more likely to have high-paying jobs and healthy, stable relationships when they grow up. They also tend to have higher IQ test scores by the age of 3 and endure fewer psychological problems throughout their lives when fatherhood is taken seriously. The Science of How Dads and Father Figures Help Kids. Recognizing Paternity Fraud and Its Consequences. ​Misattributed paternity can be devastating for men who have spent years believing they are biologically tied to a child, only to later learn that they actually share no DNA. 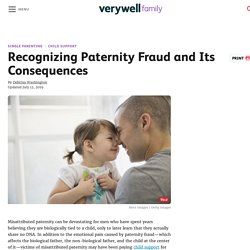 Too Many Fathers on TV Are 'Dumb Dads' Have you noticed that the world of popular entertainment seems intent on emasculating men — and fathers in particular? 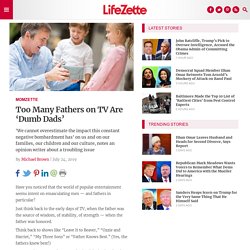 Just think back to the early days of TV, when the father was the source of wisdom, of stability, of strength — when the father was honored. Think back to shows like “Leave It to Beaver,” “Ozzie and Harriet,” “My Three Sons” or “Father Knows Best.” (Yes, the fathers knew best!) Boys' next sense of purpose: 'Father warriors' Fathers' Help Linked To Bigger Brains In Offspring. Researchers at the University of Zurich have released a study that shows the extent to which paternal assistance while bringing up baby mammals increases brain sizes, and thus intelligence. 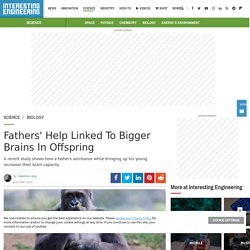 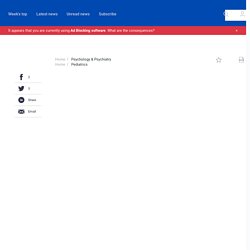 This is because behaviours established early in life also often track into adulthood. And these behaviours have a big impact on a person's risk for chronic diseases, such as Type 2 diabetes and cardiovascular disease. However, many Canadian children are not establishing healthy habits early in their lives. National data suggests that 70 per cent of four- to eight-year-old children do not consume the recommended number of servings of fruits and vegetables and close to 80 per cent of three- to four-year-olds exceed screen time recommendations. ERROR: The request could not be satisfied. University of Indianapolis study points to positive impact of father-child play – UIndy 360.

Fathers who play with their young children are making an impact that lasts well beyond childhood, a new study from the University of Indianapolis has found. 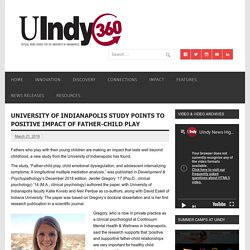 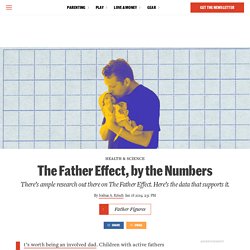 America Has A Fatherlessness Problem. After yet another school shooting, which we all knew would eventually happen, the connection between fatherlessness and school shooters has finally been seriously exposed. Several videos, discussing the links between fatherlessness and school shooters, generated over ten million views and articles drew an unprecedented level of interest. The Establishment Creates Fatherless Kids. America Has A Fatherlessness Problem. Terry Brennan Begins his Series of Articles on Fatherlessness. Article_bb3347c4-272b-11e8-828c-1799c389f6a1. Our Society Needs More Masculinity, Not Less – The Conservative Millennial Blog. It’s trendy these days to blame our problems on men– mass shootings, sexual assault, war. All of these, feminists say, can be traced back to what they call “toxic masculinity” – the infectious disease of maleness that we’ve let pervade society for far too long. Since, they purport, men are the common denominator in so many of the tragedies our country endures, they must be the root of our unrest.

Best Evidence Yet That 'Toxic Masculinity' Isn't To Blame For Shootings. Babies may benefit from looking like dad, study says. Looking like a "chip off the old block" may help improve the health of infants being raised by single mothers, a new study suggests. How The Government Creates Shooters. Another deadly shooting gives the radicals, and the government officials who can increase their power, another opportunity to ban guns and turn law-abiding citizens into criminals. What Elephants Can teach us About Gun Violence and “Toxic Masculinity” - The Post Millennial. What Do ALL the Mass Shooters Have in Common? No Father in the Home – The Bull Elephant. Fathers take more days off work to care for sick children than mothers, survey of parents shows

Gill Gorell Barnes: ‘Fathers are no less important than mothers’ 'Fathering' helps both kids and dads grow. Wondering how to give your kids that edge that will help them grow and develop to their fullest potential? A study reported in Psychology Today gives an important hint. Kyle Pruett, a child psychologist at Yale University, studied infants whose fathers took a major role in child care. ‘Judges Are the Single Biggest Cause of Fatherlessness’ From Cattle To Capital: How Agriculture Bred Ancient Inequality : The Salt. More Misunderstanding of Work-Life Balance. McIntosh Debunked Yet Again but Still Relied on by British Social Workers in Custody Cases.

January 26, 2017 by Robert Franklin, Esq, Member, National Board of Directors, National Parents Organization. BYU research finds link between father absences and declining male college enrollment. Absent dads may be contributing to the growing male gender gap in higher education, according to research published by a professor at Brigham Young University. Brian Willoughby, an assistant professor in the School of Family Life, was one of three authors that recently published a study in the journal “Family Relations” looking at whether the declining rate of males enrolling in college has been influenced by nonmarital birth rates and father absences.

What they found was that the gender gap opened up about 18 years after family structure changes in the late 1960s. Dads play key role in child development. Fathers play a surprisingly large role in their children's development, from language and cognitive growth in toddlerhood to social skills in fifth grade, according to new findings from Michigan State University scholars. The research provides some of the most conclusive evidence to date of fathers' importance to children's outcomes and reinforces the idea that early childhood programs such as Head Start should focus on the whole family, including mother and father alike. The findings are published online in two academic journals, Early Childhood Research Quarterly and Infant and Child Development. A New Approach To Male Birth Control Is Coming. What you didn't know having a father was saving you from. How 'dad deprivation' could be eroding modern society.

Editorial: A look at the fatherless crisis. A World Without Fathers. Problems-with-paternity-fraud-to-securing-parental-rights_b_9244342. National Parents Organization, Shared Parenting, Child Support and Alimony Reform. Barbara Kay: Don’t sell fathers short: They are as crucial to a child’s well being as a mother. HuffPo Prints Evidence-Free Claim that Abusive Dads ‘Routinely’ Get Custody. The US Is Leading The Way In Fatherlessness And It's Hurting Our Kids. Science: Dads Improve Their Kids' Lives. Single women raising children do a poor job. Why Dads Matter — The Atlantic.

Where did all the Japanese fathers go? Chapter 4: How Mothers and Fathers Spend Their Time. U.S. Incarceration Rate Contributes to Fatherlessness. Children in Single-Parent Families Perform Worse on Achievement Tests than Their Two-Parent Peers. Misandry in psychology: reproductive coercion. Does pregnancy lower testosterone in dads-to-be? McGill University Health Centre. Boy Trouble by Kay S. Hymowitz, City Journal Autumn 2013. The Consequences of Fatherlessness. Like Father, Like Son: What the California Mouse Teaches Us About Paternal Behavior.