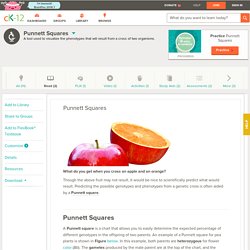 Though the above fruit may not result, it would be nice to scientifically predict what would result. Predicting the possible genotypes and phenotypes from a genetic cross is often aided by a Punnett square. Punnett Squares A Punnett square is a chart that allows you to easily determine the expected percentage of different genotypes in the offspring of two parents.

An example of a Punnett square for pea plants is shown in Figure below. An explanation of Punnett squares can be viewed at (25:16). This Punnett square shows a cross between two heterozygotes, Bb. Predicting Offspring Genotypes In the cross shown in Figure above, you can see that one out of four offspring (25 percent) has the genotype BB, one out of four (25 percent) has the genotype bb, and two out of four (50 percent) have the genotype Bb. Predicting Offspring Phenotypes You can predict the percentages of phenotypes in the offspring of this cross from their genotypes. 1. CK-12 Foundation. Dihybrid Cross. These type of crosses can be challenging to set up, and the square you create will be 4x4. 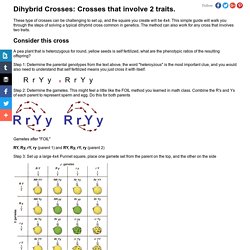 This simple guide will walk you through the steps of solving a typical dihybrid cross common in genetics. The method can also work for any cross that involves two traits. Consider this cross A pea plant that is heterozygous for round, yellow seeds is self fertilized, what are the phenotypic ratios of the resulting offspring? Step 1: Determine the parental genotypes from the text above, the word "heteroyzous" is the most important clue, and you would also need to understand that self fertilized means you just cross it with itself. RrYy x RrYy Step 2: Determine the gametes. Gametes after "FOIL" RY, Ry, rY, ry (parent 1) and RY, Ry, rY, ry (parent 2) Step 3: Set up a large 4x4 Punnet square, place one gamete set from the parent on the top, and the other on the side Step 4: Write the genotypes of the offspring in each box and determine how many of each phenotype you have. Some Shortcuts. Punnett Squares. Hartnell College Biology Tutorials. 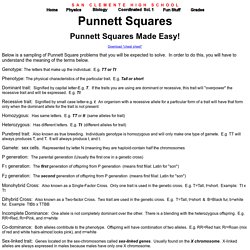 Download "cheat sheet" Below is a sampling of Punnett Square problems that you will be expected to solve. In order to do this, you will have to understand the meaning of the terms below. Genotype: The letters that make up the individual. Phenotype: The physical characteristics of the particular trait. Dominant trait: Signified by capital letter-E.g. Recessive trait: Signified by small case letter-e.g. t. Homozygous: Has same letters. Heterozygous: Has different letters. Purebred trait: Also known as true breeding. Gamete: sex cells. P generation: The parental generation (Usually the first one in a genetic cross) F1 generation: The first generation of offspring from P generation (means first filial: Latin for "son") Perform a dihybrid cross. Untitled. Molecules of Inheritance. 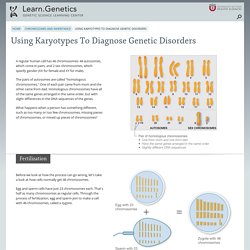 When this happens, one cell may get two copies of a chromosome, while another cell gets none. Incorrect distribution of chromosomes is called nondisjunction. If a sperm or egg cell with too many or too few chromosomes participates in fertilization, it will produce a zygote with too many or too few chromosomes. A zygote with 3 copies of a chromosome is said to have trisomy (pronounced TRY-so-mi). A zygote that is missing a chromosome is said to have monosomy (MOH-no-so-mi). Most of the time, autosomal (non-sex chromosome) trisomy and monosomy are lethal because the zygote ends up with too much or too little genetic information. When monosomy or trisomy involves sex chromosomes, individuals usually survive and many are quite healthy. Make A Karyotype. How Do Scientists Read Chromosomes? Karyotyping Activity.