Ending ‘Too Big to Fail’ Could Rest on Obscure Contract Language. Wall Street and global financial regulators, trying to squash the lingering perception that banks remain “too big to fail,” are looking to an obscure change in derivatives contracts to solve the problem. 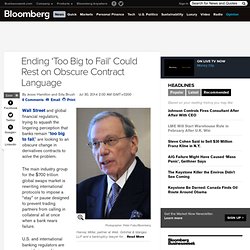 The main industry group for the $700 trillion global swaps market is rewriting international protocols to impose a “stay” or pause designed to prevent trading partners from calling in collateral all at once when a bank nears failure. U.S. and international banking regulators are considering making use of the new protocols mandatory, according to two people who spoke on condition of anonymity to discuss private meetings.

The International Swaps and Derivatives Association is aiming to release the revised contract guidelines by November, the people said. The new protocol “puts another nail in the coffin of ‘too big to fail,’” Wilson Ervin, a senior adviser at Credit Suisse Group AG (CSGN) and the bank’s chief risk officer during the 2008 crisis, said in an e-mail. Infosec. Health, disease, toxins & detox. OpBigBrother. What Is It About Narcissism That Almost Everyone Doesn't Understand? September 22, 2014 | Like this article? 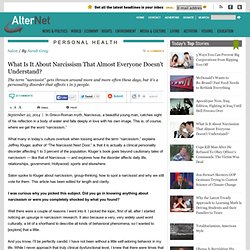 Join our email list: Stay up to date with the latest headlines via email. In Greco-Roman myth, Narcissus, a beautiful young man, catches sight of his reflection in a body of water and falls deeply in love with his own image. This is, of course, where we get the word “narcissism.” What many in today’s culture overlook when tossing around the term “narcissism,” explains Jeffrey Kluger, author of “The Narcissist Next Door,” is that it is actually a clinical personality disorder affecting 1 to 3 percent of the population. Salon spoke to Kluger about narcissism, group-thinking, how to spot a narcissist and why we still vote for them. 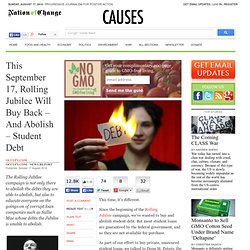 Since the beginning of the Rolling Jubilee campaign, we’ve wanted to buy and abolish student debt. But most student loans are guaranteed by the federal government, and so they are not available for purchase. As part of our effort to buy private, unsecured student loans, we talked to Doug St. Peters, the Vice President of Portfolio Management at Sallie Mae, who packages that company’s debt into securities and sells your loans on the secondary market. He confirmed that Sallie Mae does sell its private loans to two large debt buying companies.

He would not name names, and he refused to sell us any of these portfolios when he learned that we intended to abolish the debt. 1. political.

So let’s discuss it in more than 140 characters. In case it needs saying: Police officers are unlike terrorists in almost all respects. Crucially, the goal of the former, in their vastest majority, is to have a stable, peaceful, safe, law-abiding society, which is a goal we all share. The goal of the latter is … well, it’s complicated. I picked up the statistic from a blog post called: “ Fear of Terror Makes People Stupid ,” which in turn cites the National Safety Council for this and lots of other numbers reflecting likelihoods of dying from various causes. I take it as a given that your mileage may vary. The militarization of law enforcement probably contributes to the danger. There are some bad apples in the police officer barrel. This Genius Cheat Sheet For Gardeners Tells Where And When To Plant Your Vegetables.

If you’ve never planted a seed in the ground before, chances are that the thought of growing your own vegetables — no matter how exciting — incites feelings of anxiety. 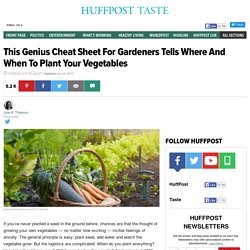 The general principle is easy: plant seed, add water and watch the vegetable grow. But the logistics are complicated. When do you plant everything? How big will cabbage grow? Will it overshadow the carrots? The answer is yes, you will probably fail at more than a few things when starting your first garden. Extract operands from an expression - Maple Help. More.