Margaret Drabble: ‘I am not afraid of death. I worry about living’ We are often told that in earlier times all cultures had a concept of the afterlife – that “everybody” believed in some form of life after death, be it a journey over a river to a dark land, an eternity of hellfire and torment, a paradise with angels and ambrosia, or a reunion with loved ones. 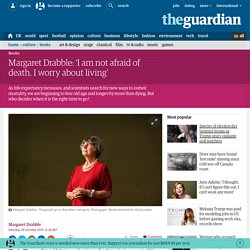 Capital - The surprising benefits of a mid-career break. When Winston Chen told his friends that he had quit his job as chief technology officer at a software company to move to a small island in Arctic Norway with his family for a year, few people called him crazy. 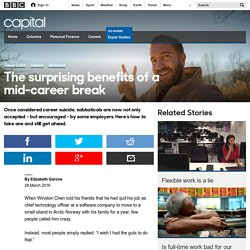 Tattoos bring a new form of body language to the office. “I don’t think it’s any more about making an aggressive countercultural statement,” says Hugo Varney, unrolling his shirt sleeve to display a large tattoo on his forearm, which he got three years ago. 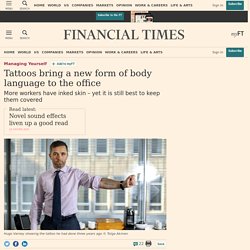 Sample the FT’s top stories for a week You select the topic, we deliver the news. Debate: Would a legal ivory trade save elephants or speed up the massacre? ‘The ivory ban has made prices high and poaching lucrative’ Enrico Di Minin, research fellow in conservation science at the University of Helsinki, and Douglas MacMillan, professor of biodiversity economics at the Durrell Institute of Conservation and Ecology, University of Kent. 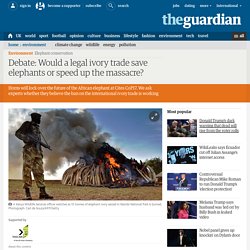 The 1989 UN ban on international ivory trading was supposed to protect elephants. The result has been counterproductive because restricting supply in a time of increasing wealth in Asia has driven up prices, dramatically increasing incentives and rewards for poachers. Since 2008, large-scale elephant poaching has restarted, driven by high prices in Asia. How to Become Great at Just About Anything - Freakonomics Freakonomics.

Sure, practice makes perfect — but how you practice matters even more than how much. 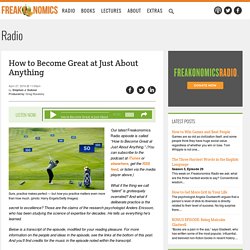 (photo: Harry Engels/Getty Images) Our latest Freakonomics Radio episode is called “How to Become Great at Just About Anything.” (You can subscribe to the podcast at iTunes or elsewhere, get the RSS feed, or listen via the media player above.) What if the thing we call “talent” is grotesquely overrated? And what if deliberate practice is the secret to excellence? Below is a transcript of the episode, modified for your reading pleasure.

MUSIC: Pat Andrews, “Quirky Get Faster” We are continuing now with Self-Improvement Month. Monthly news lesson: Still no flying cars? The future promises something better. I chose not to go to university – it was the best career decision I ever made. I left school in 2009, the year before university fees rose dramatically. 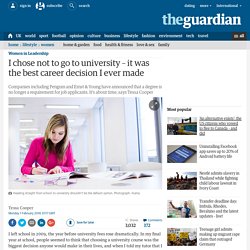 In my final year at school, people seemed to think that choosing a university course was the biggest decision anyone would make in their lives, and when I told my tutor that I wasn’t going to university, she stopped talking to me. Not only was I no longer of interest as I didn’t contribute to the school’s targets, but she was probably also struggling to work out how to advise me on what my next step should be. When I started my job hunt, every single entry-level job I looked at said that a degree was mandatory. Is a College Degree Still Worth It? In the United States, college is a right of passage. 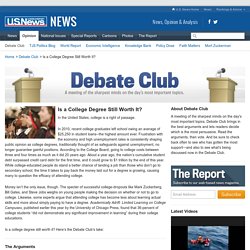 In 2010, recent college graduates left school owing an average of $25,250 in student loans--the highest amount ever. Frustration with the economy and high unemployment rates is consistently shaping public opinion as college degrees, traditionally thought of as safeguards against unemployment, no longer guarantee gainful positions. According to the College Board, going to college costs between three and four times as much as it did 20 years ago.

About a year ago, the nation’s cumulative student debt surpassed credit card debt for the first time, and it could grow to $1 trillion by the end of this year. While college-educated people do stand a better chance of landing a job than those who don’t go to secondary school, the time it takes to pay back the money laid out for a degree is growing, causing many to question the efficacy of attending college. Money isn’t the only issue, though. Is a college degree still worth it? Interview: Martin Ford, Author Of 'Rise Of The Robots' : All Tech Considered. The German service robot Toomas was designed to welcome customers and help them find items in a store. 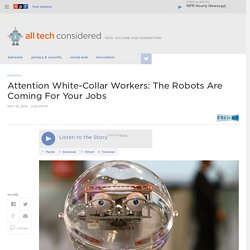 Joerg Sarbach/AP hide caption itoggle caption Joerg Sarbach/AP The German service robot Toomas was designed to welcome customers and help them find items in a store. Joerg Sarbach/AP From the self-checkout aisle of the grocery store to the sports section of the newspaper, robots and computer software are increasingly taking the place of humans in the workforce. Can Companies Excel Without Making Workers Miserable? - Room for Debate. Still not disruptive web-based language learning.

Jonathan Dykes runs a group of language schools in Barcelona as well as one of the first online schools, Net Languages, which makes for a unique perspective on the merits and shortcomings of both. 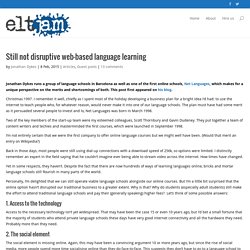