Absurd Creature of the Week: This Prehistoric Elephant Had a Huge Spork for a Mouth - Wired Science. Scientists obviously can’t know for sure, but Platybelodon’s vocalizations may have sounded something like “herp a derp derp.” 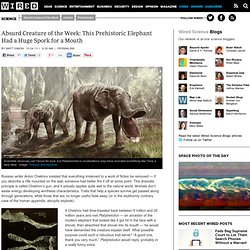 Image: Tomasz Jedrzejowski Russian writer Anton Chekhov insisted that everything irrelevant to a work of fiction be removed — if you describe a rifle mounted on the wall, someone had better fire it off at some point. This dramatic principle is called Chekhov’s gun, and it actually applies quite well to the natural world: Animals don’t waste energy developing worthless characteristics. Traits that help a species survive get passed along through generations, while those that are no longer useful fade away (or in the stubbornly contrary case of the human appendix, abruptly explode).

If Chekhov had time-traveled back between 8 million and 20 million years and met Platybelodon — an ancestor of the modern elephant that looked like it got hit in the face with a shovel, then absorbed that shovel into its mouth — he would have demanded the creature explain itself. Ancient Giants. Reporter: Allison LangdonProducer: Nick Greenaway The Nullarbor Plain is famous for its emptiness. 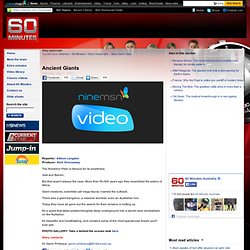 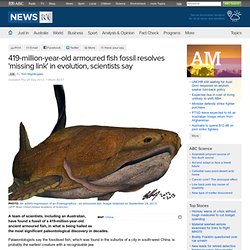 How Big Can a Person Get? Grow your own body parts. James Godwin: 'Humans, like salamanders, grow limbs - we can do it.' Photo: Joe Armao Researchers are closer to understanding what animals need to regrow their body parts, after Australian scientists established the key role of the immune system in salamanders. Also known as Mexican walking fish, salamanders can regenerate their own limbs, tails, jaws, retina and heart. But the researchers found that if certain immune cells were blocked, the amphibians were unable to regrow limbs, though healing did occur.

"It means that we have turned this perfect process of regenerating a limb into a failure of the kind you would normally see in mammals," said lead researcher James Godwin, of Monash University's Australian Regenerative Medicine Institute. Published in the Pro-ceedings of the National Academy of Sciences on Tuesday, the research explains the previously unknown role of immune cells, known as macrophages, in the amphibian's ability to regrow arms and legs.

Advertisement. Leaping lizards, no it's a koala › News in Science (ABC Science) News in Science Wednesday, 29 May 2013 Dani Cooper ABC New species More than 20 million years ago an Australian koala was leaping possum-like through the trees at night - a far cry from its couch potato cousins that slump in eucalypts today. 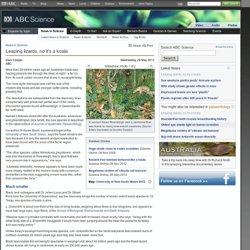 The more-agile marsupial was half the size of the modern-day koala and ate younger, softer plants, including possibly fruit. The descriptions are extrapolated from the discovery of an exceptionally well-preserved partial skull of the newly discovered species found at Riversleigh, in Queensland's far north-west. Named Litokoala dicksmithi after the Australian adventurer and philanthropist, Dick Smith, the new species is described in the latest edition of Journal of Systematic Palaeontology . How the turtle got its unique hard shell. 31 May 2013 Last updated at 08:08 GMT By Melissa Hogenboom Science reporter, BBC News The sea turtle's unique shell evolved many millions of years ago How the turtle shell evolved has puzzled scientists for years, but new research sheds light on how their hard shells were formed. Scientists say the ancient fossil skeleton of an extinct South African reptile has helped bridge a 30 to 55-million-year gap. This ancestor of the modern turtle, Eunotosaurus , is thought to be around 260 million years old.

It had significant differences to a recently found fossil relative . Eunotosaurus was discovered over a century ago but new research in the journal Current Biology has only now analysed its differences to other turtle fossils. An extinct reptile fossil has helped scientists discover how turtles hard shells are formed. World's first bird? Scientists in a flap over fossil. The skeleton of the recently discovered dinosaur dubbed Aurornis xui. Photo: AP During the Jurassic period, between about 200 million and 145 million years ago, some meat-eating dinosaurs began evolving birdlike skeletons and sprouting feathers on their bodies. One group of these creatures eventually split off to become birds, although researchers have long debated which one it was and when it actually happened.

Now, a team of scientists claims to have found the earliest known bird, a discovery that could finally put these questions to rest. But critics question whether it really is a bird, and some are not entirely convinced that it's an authentic specimen. About 30 species of feathered dinosaurs have been discovered in the past dozen years or so, mostly from geological formations in China's northeastern Liaoning province. We know that birds are dinosaurs, but we still don't know the exact genealogy of the first birds. A fossil of Archaeopteryx. Advertisement Science Now. Transparent Butterfly.