Hemp houses low-impact, fireproof, termite-proof and cost-effective, says couple. When Alexia Jankowski and her partner Ben Whitaker decided to build a low-impact house in the hills, they turned to hemp — and say they hope one day their "very alternative building product" will be seen as mainstream. 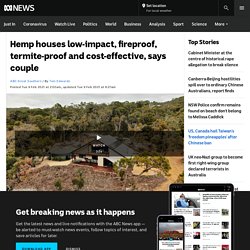 The Western Australian couple hand built the three-bedroom home on a five-acre bush block in Kronkup, 30 kilometres west of Albany. They say hemp, a plant product, has been used in numerous countries as a building material for thousands of years but it is relatively uncommon in Australia. Ms Jankowski, an environmental scientist, said their goal was to build a house that was as low impact on the environment as possible.

Moroccan Students Build Off-Grid 'Hemp House' Made Almost Entirely From Hemp And Solar Panels. I don’t often align myself with products but this is one that I just had to share! 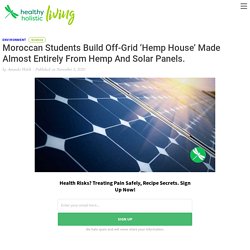 Some of you may already know years ago, I was diagnosed with Multiple Sclerosis. I can still recall what it felt like to have my life change overnight… I went from an Executive Director of a non-profit organization, running marathons, rock climbing, hiking canyons and kayaking to being completely bedridden and staring at a wall for 15 hours a day. Of course, I went to see many doctors but unfortunately I didn’t find the help I needed. - Industrial Hemp Association. Builders Are Using Hemp Instead of Concrete and It Could Save the Environment.

According to Bloomberg, cement manufacturers are responsible for about 7% of annual global carbon dioxide emissions. 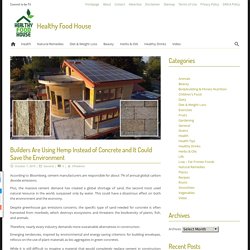 Plus, the massive cement demand has created a global shortage of sand, the second most used natural resource in the world, surpassed only by water. This could have a disastrous effect on both the environment and the economy. Despite greenhouse gas emissions concerns, the specific type of sand needed for concrete is often harvested from riverbeds, which destroys ecosystems and threatens the biodiversity of plants, fish, and animals. Therefore, nearly every industry demands more sustainable alternatives in construction. Emerging tendencies, inspired by environmental and energy-saving criterions for building envelopes, refocus on the use of plant materials as bio aggregates in green concretes. Surprisingly, hemp-based concretes are one of the most environmentally sustainable alternatives to conventional concrete. Sources:themindunleashed.comwww.bloomberg.comurbannext.net.

Hemp houses could be greener, fire-resistant and built like Lego. All in all, Terry Radford's new product — with apologies to Pink Floyd — looks to be anything but another brick in a wall. 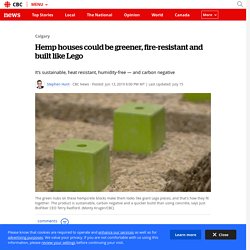 That's because the president of Just BioFiber, based in Airdrie, Alta., believes it has come up with a hempcrete-based brick that is more than the equal of the usual homebuilding materials. Radford, president and CEO of Just BioFiber, says his company has found a way to combine hempcrete — the wooden core of the hemp plant — with lime and water to create a building block that he believes has the potential to change the way we build homes. Radford says the product is as environmentally-friendly as it is user-friendly.

"My brother is the guy who actually invented the product. What had happened is he started working with hempcrete and fell in love with the material because it had these great properties," Radford said. "The benefit to hemp is it's very insulative. Facebook. Ściany z konopi - ekologiczne i 7 razy mocniejsze od betonu - Dobre Wiadomości. The Ultimate Guide to Hempcrete : An Eco-Friendly Concrete Substitute. Why Hemp Houses Will Be The Best Houses In the World. Hempcrete is ten times stronger than concrete, mold resistant, rot resistant, pest resistant, fire resisitant, and carbon negative. 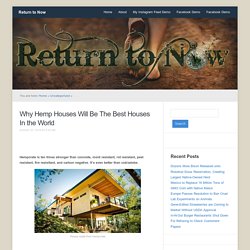 It’s even better than cob/adobe. House made from hempcrete I’ve written before about how cob or “adobe” is the best building material on earth… and it was… until hempcrete. Construction complete on B.C.’s first sustainable ‘Lego’ home. A Vancouver Island home built using cutting-edge green technology is now move-in ready. 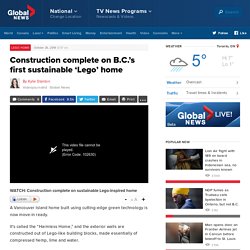 It’s called the “Harmless Home,” and the exterior walls are constructed out of Lego-like building blocks, made essentially of compressed hemp, lime and water. Now, it’s being hailed as the most sustainable, safest and most energy-efficient house possible. Home owner, Arno Keinonen recently settled in. READ MORE: This ‘Lego-inspired’ Sooke home will be green – and fireproof – when it’s finished: builders “We are very happy with the end result,” he said.

The product itself is being manufactured in Calgary. “We heat it up to over 1,500 degrees Fahrenheit and it barely has an impact,” said Just Bio Fiber builder Mark Faber. WATCH: Super-green home built on Vancouver Island The blocks also absorb carbon, making the them grow even stronger over time. “With those aspects and the condition the world is in now, this just has to go – it just hast to,” said Just Bio Fiber Director, Michael DeChamplain. Beton Konopny - Hempcrete - Wykonanie na Terenie Całej Polski. Beton Konopny (ang. 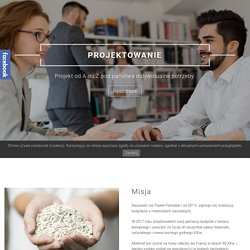