Daoist Philosophy. Along with Confucianism, “Daoism” (sometimes called “Taoism“) is one of the two great indigenous philosophical traditions of China. 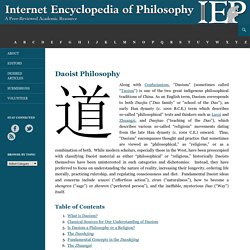 As an English term, Daoism corresponds to both Daojia (“Dao family” or “school of the Dao”), an early Han dynasty (c. 100s B.C.E.) term which describes so-called “philosophical” texts and thinkers such as Laozi and Zhuangzi, and Daojiao (“teaching of the Dao”), which describes various so-called “religious” movements dating from the late Han dynasty (c. 100s C.E.) onward.

Thus, “Daoism” encompasses thought and practice that sometimes are viewed as “philosophical,” as “religious,” or as a combination of both. While modern scholars, especially those in the West, have been preoccupied with classifying Daoist material as either “philosophical” or “religious,” historically Daoists themselves have been uninterested in such categories and dichotomies. Table of Contents 1. 2. 3. 4. Daoism. 1. 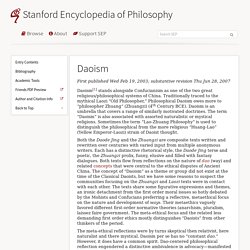 Definition of “Daoism” Definitions of Daoism are controversial because of the complex twists in its development as it played its role in the long history of China. Even the coining of the term creates ambiguity about what counts as ‘Daoism’. Three to seven centuries after they were supposed to have lived, Han dynasty (around 100 BCE) historians identified Laozi and Zhuangzi as Daoists.

Introduction to Daoism. The Chinese word dao means a way or a path. 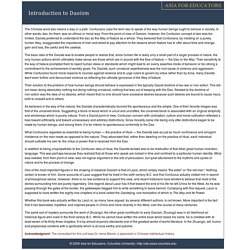 Confucians used the term dao to speak of the way human beings ought to behave in society. In other words, dao, for them, was an ethical or moral way. Definition, Origin, Philosophy, Beliefs, & Facts. Taoism. Taoism (also known as Daoism) is a Chinese philosophy attributed to Lao Tzu (c. 500 BCE) which contributed to the folk religion of the people primarily in the rural areas of China and became the official religion of the country under the Tang Dynasty. 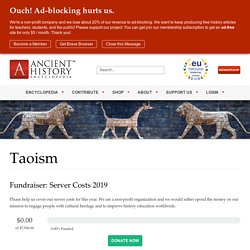 Taoism is therefore both a philosophy and a religion. It emphasizes doing what is natural and "going with the flow" in accordance with the Tao (or Dao), a cosmic force which flows through all things and binds and releases them. Law In Imperial China – Confucianism And Legalism. Killing the scholars and burning the books (anonymous 18th century Chinese painting depicting the alleged burning of books and killing of scholars under China’s first emperor Qin Shihuang; source: Wikipedia) Confucianism (儒家) originated from the teachings of Confucius (551 – 479 BC), a Chinese scholar, politician and philosopher who lived in the Spring and Autumn period. 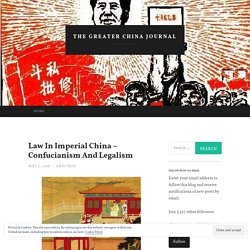 The main body of the Confucian canon comprises the Four Books and the Five Classics (四書五經), texts which have been traditionally attributed to Confucius himself, although their authorship is not ascertained beyond doubt. Confucius’ philosophy revolved around two concepts: the nobleman and the establishment of a well-ordered society. The nobleman (君子, pinyin: jūn zǐ , also translated as “gentleman” and “superior man”) is a term that in ancient China referred to the son of a feudal lord. Confucius, however, gave this word a new meaning. If you want to support our website, take a look at one of our books Like this: Confucius and the Hundred Schools of Thought.

Chinese philosopher. Confucianism. The philosopher Confucius (or Kongzi, c. 551 to c. 479 BCE) is the recognized founder of Confucianism, also referred to as the Ru-jia doctrine or School of Literati as it is known by Western scholars. 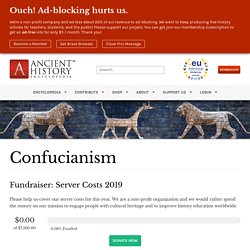 Originally, Confucianism was composed of a set of political and moral doctrines with the teachings of Confucius as its basis. Later on, the teachings of Mencius (Meng Zi) and Xunzi (Xun zi) also became part of Confucianism. The word Confucianism seems to be the creation of European Christians who entered China about 1860 CE and was originally used to label their notion of the non-Christian religions they came across in China. The Approach & Teachings of Confucius While his neighbours in India were obsessed with metaphysical debates, Confucius was solely focused on everyday concerns. We do not yet know how to serve man, how can we know about serving the spirits? Confucius believed in the perfectibility of all men and he was against the idea that some men are born superior to others.

Legacy. BRIA 24 2 c The Development of Confucianism in Ancient China. CONSTITUTIONAL RIGHTS FOUNDATIONBill of Rights in ActionFALL 2008 (Volume 24, No. 2) Politics How Political Parties Began | Making it Easier to Vote vs. 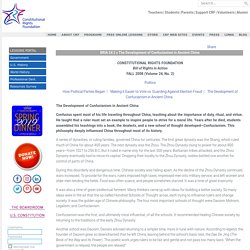 Buddhism_silkroad. Buddhism spread across Asia through networks of overland and maritime routes between India, Southeast Asia, Central Asia, and China. 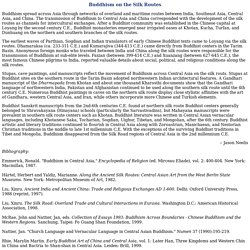 The transmission of Buddhism to Central Asia and China corresponded with the development of the silk routes as channels for intercultural exchanges. After a Buddhist community was established in the Chinese capital at Loyang by the second century C.E., Buddhist monasteries emerged near irrigated oases at Khotan, Kucha, Turfan, and Dunhuang on the northern and southern branches of the silk routes.

The earliest waves of Parthian, Sogdian and Indian translators of early Chinese Buddhist texts came to Loyang via the silk routes. Dhamaraksa (ca. 233-311 C.E.) and Kumarajiva (344-413 C.E.) came directly from Buddhist centers in the Tarim Basin. Anonymous foreign monks who traveled between India and China along the silk routes were responsible for the transmission of Buddhism at sub-elite levels. -- Jason Neelis Bibliography: 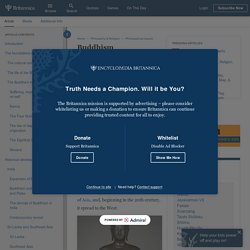 There is disagreement among scholars about the dates of the Buddha’s birth and death. Many modern scholars believe that the historical Buddha lived from about 563 to about 483 bce. Many others believe that he lived about 100 years later (from about 448 to 368 bce). At this time in India, there was much discontent with Brahmanic (Hindu high-caste) sacrifice and ritual. In northwestern India there were ascetics who tried to create a more personal and spiritual religious experience than that found in the Vedas (Hindu sacred scriptures). A proto-Samkhya group (i.e., one based on the Samkhya school of Hinduism founded by Kapila) was already well established in the area.

Get a Britannica Premium subscription and gain access to exclusive content. Spread of Buddhism. Religion in Ancient China. Religious practices in ancient China go back over 7,000 years. Long before the philosophical and spiritual teachings of Confucius and Lao-Tzu developed or before the teachings of the Buddha came to China, the people worshipped personifications of nature and then of concepts like "wealth" or "fortune" which developed into a religion.

These beliefs still influence religious practices today. For example, the Tao te Ching of Taoism maintains that there is a universal force known as the Tao which flows through all things and binds all things but makes no mention of specific gods to be worshipped; still, modern Taoists in China (and elsewhere) worship many gods at private altars and in public ceremonies which originated in the country's ancient past.

Scholar Harold M. Buddhism. Buddhism is one of the most important Asian spiritual traditions. 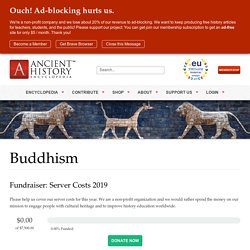 During its roughly 2.5 millennia of history, Buddhism has shown a flexible approach, adapting itself to different conditions and local ideas while maintaining its core teachings. As a result of its wide geographical expansion, coupled with its tolerant spirit, Buddhism today encompasses a number of different traditions, beliefs, and practices. During the last decades, Buddhism has also gained a significant presence outside Asia. With the number of adherents estimated to be almost 400 million people, Buddhism in our day has expanded worldwide, and it is no longer culturally specific.

Living in the Chinese Cosmos: Understanding Religion in Late-Imperial China. Buddhism is an interesting form of Chinese religion for many reasons, not least because it was the first major religious tradition in China that was “imported” from abroad. (Other forms of Buddhism from Tibet and Mongolia, Christianity in different guises, Manichaeism, Zoroastrianism, Judaism, and Islam would follow later.) Long after Buddhism had become a natural part of the Chinese religious landscape, many Chinese -- Buddhist and non-Buddhist alike -- still pondered the significance of the foreign origin of the religion.

First of all, although the historical Buddha was believed to have been a prince, thus placing him high on the scale of social respectability, in Chinese eyes he was, ultimately, a foreigner. His doctrine was preached using words that, to the Chinese ear, sounded foreign. Buddhism in China: Indiana University.