Schools in Hawaii. Education in Hawaii - from kindergarten to the doctorate degree Since the arrival of the missionaries in 1820, education has developed quickly in Hawaii. 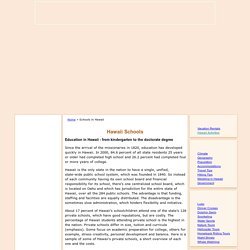 In 2000, 84.6 percent of all state residents 25 years or older had completed high school and 26.2 percent had completed four or more years of college. Hawaii is the only state in the nation to have a single, unified, state-wide public school system, which was founded in 1840. So instead of each community having its own school board and financial responsibility for its school, there's one centralized school board, which is located on Oahu and which has jurisdiction for the entire state of Hawaii, over all the 284 public schools. 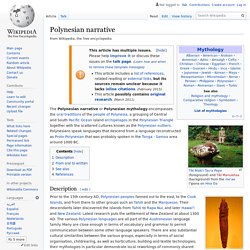 Polynesians speak languages that descend from a language reconstructed as Proto-Polynesian that was probably spoken in the Tonga - Samoa area around 1000 BC. Description[edit] A sacred god figure wrapping for the war god 'Oro, made of woven dried coconut fibre (sennit), which would have protected a Polynesian god effigy (to'o), made of wood. Maui - The Demigod Of Polynesia. Yet his father warned him that his time of failure and death would surely come. 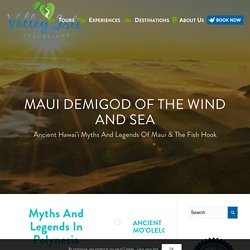 Maui asked his father “by what shall I be overcome?” And his father replied “there is one so powerful that no tricks can be of any avail.” Maui’s father told him of his ancestor, Hine Nui Te Po (Great Hine of the Night) the Guardian of Life, would see to his demise. This goddess had flashing green eyes, volcanic glass for teeth, a large fish like mouth and hair that floated in the air like seaweed. Haumea - Hawaiian Goddess. Haumea had several daughters. 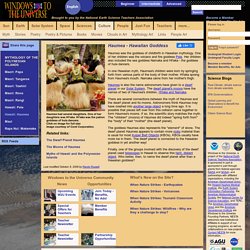 One of her daughters was Hi'iaka. Hi'iaka was the patron goddess of hula dancers. Click on image for full size Image courtesy of Corel Corporation. Polynesian Mythology - Myth Encyclopedia - god, legend, war, world, creation, life, hero, people, children. Polynesia is a vast region of the Pacific Ocean consisting of many hundreds of widely separated, culturally and politically diverse island groups.

Ranging from Midway and Hawaii in the north to New Zealand in the south, the triangular area called Polynesia also includes Tahiti, Samoa, Tonga, Tuamotu, the Cook Islands, and the Pitcairn Islands. Although the mythology of Polynesia took different forms on various islands, many of the basic stories, themes, and deities were surprisingly similar throughout the region. Foundations of Religion and Myth. Scholars believe that humans first migrated to Polynesia from Southeast Asia about 2,000 years ago. These people carried with them their mythological traditions about events, deities, and heroes. Polynesian religion and mythology placed great emphasis on nature, particularly the ocean environment. Because mana was sacred, Polynesians invented complicated rules to protect it. Origin of Yams deity god or goddess Major Gods and Characters. Laie Hawaii Temple. Coordinates: The Laie Hawaii Temple was the first temple built by the LDS Church outside the contiguous United States. 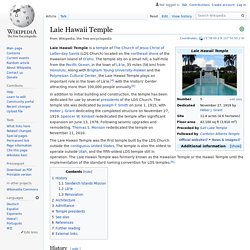 The temple is also the oldest to operate outside Utah, and the fifth-oldest LDS temple still in operation. The Laie Hawaii Temple was formerly known as the Hawaiian Temple or the Hawaii Temple until the implementation of the standard naming convention for LDS temples.[6] History[edit] Sandwich Islands Mission[edit] Lāʻie[edit] 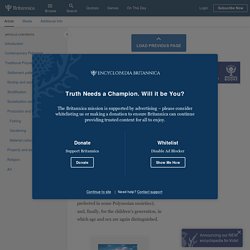 Polynesian kinship terminology distinguishes between generations, as might be expected in a society so strongly oriented toward tradition and genealogy. Polynesian Cultural Center: 9 Polynesian Foods to Eat. Nothing goes with culture better than food. 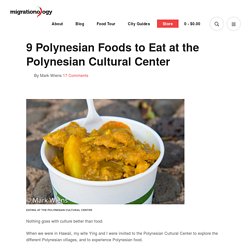 Music of Polynesia. The music of Polynesia is a diverse set of musical traditions from islands within a large area of the central and southern Pacific Ocean, approximately a triangle with New Zealand, Hawaii and Easter Island forming its corners. 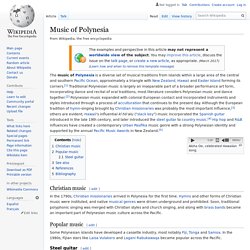 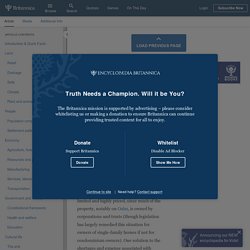 Largely because of its insularity and dependence on imports, Hawaii has a high cost of living. Transportation costs are included in the prices of nearly all consumer goods. As Hawaii’s population rose, housing became increasingly difficult to acquire, and it is disproportionately expensive when compared with housing costs in many mainland states.

The Government of Hawaii. The government of Hawaii currently follows a constitutional government reminiscent of the Constitutional Monarchy of the Kingdom of Hawaii in 1840, and the statehood model of the US Federal Government. The Hawaii Government's structure is decided by its constitution, and it follows a general republic model where the government is divided into three branches: the executive, legislative, and judiciary. The state government is considered centralized, with all of the executive powers almost concentrated on the Governor's office. Local governments are divided into four counties, though these could also act as municipalities at the same time. Hawaiian religion. Polytheistic, animistic Hawaiian religious beliefs Hawaiian religion encompasses the indigenous religious beliefs and practices of Native Hawaiians.

It is polytheistic and animistic, with a belief in many deities and spirits, including the belief that spirits are found in non-human beings and objects such as other animals, the waves, and the sky. Beliefs[edit] Deities[edit] Weather in Hawaii. Weather in The Hawaiian Islands is very consistent, with only minor changes in temperature throughout the year. There are really only two seasons in Hawaii: summer (kau) from May to October and winter (hooilo) from November to April.

Facts, Topography, History, & Volcanoes. Hawaii, Hawaiian Hawai‘i, volcanic island, Hawaii, U.S. It lies southeast of Maui island and constitutes Hawaii county. Known as the Big Island, it is the southeasternmost and largest of the Hawaiian Islands. Its area of some 4,030 square miles (10,438 square km) continues to grow as Kilauea, the world’s most active volcano, continues to pour lava into the ocean. The island is formed by five volcanoes (Hualalai, Kilauea, Kohala, Mauna Kea, and Mauna Loa) that are connected by lava saddles (ridges) and is the youngest island geologically of the Hawaiian Islands. Mauna Loa (13,677 feet [4,169 metres]), located some 25 miles (40 km) west of Kilauea, is considered the world’s largest volcano; the two volcanoes are the main feature of Hawaii Volcanoes National Park, which has been designated a World Heritage site.