Pele's Revenge: From Myths & Legends at Americanfolklore.net. A Hawaii Legend retold by S.E. 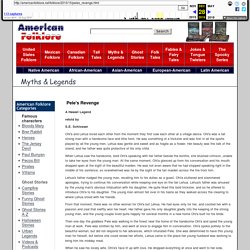 Schlosser Ohi'a and Lehua loved each other from the moment they first saw each other at a village dance. Ohi'a was a tall strong man with a handsome face and lithe form. When Lehua saw the handsome, bold Ohi'a speaking with her father beside the bonfire, she blushed crimson, unable to take her eyes from the young man. Lehua's father nudged the young man, recalling him to his duties as a guest. From that moment, there was no other woman for Ohi'a but Lehua. Then one day the goddess Pele was walking in the forest near the home of the handsome Ohi'a and spied the young man at work.

When he saw his lovely wife, Ohi'a's face lit up with love. Lehua fell to her knees beside the twisted tree that had once been her husband. Hawaiian Mythology: Part Two: Children of the Gods: XIX. Haumea. Sacred Texts Pacific Index Previous Next p. 276 THE mysterious figure of Haumea in Hawaiian myth is identified, now with Papa the wife of Wakea, who lived as a woman on earth and became mother of island chiefs and ancestress of the Hawaiian people; now with La‘ila‘i, the woman born with the gods Kane and Kanaloa and the man Ki‘i; again with the fire goddess Pele who sprang from the sacred thighs of Haumea. 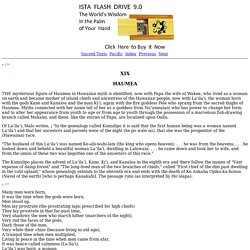 Myths connected with her name tell of her as a goddess from Nu‘umealani who has power to change her form and to alter her appearance from youth to age or from age to youth through the possession of a marvelous fish-drawing branch called Makalei; and these, like the stories of Papa, are localized upon Oahu. Polynesian Mythology - Myth Encyclopedia - god, legend, war, world, creation, life, hero, people, children. Polynesia is a vast region of the Pacific Ocean consisting of many hundreds of widely separated, culturally and politically diverse island groups. 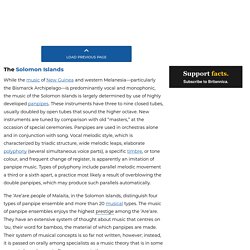 These instruments have three to nine closed tubes, usually doubled by open tubes that sound the higher octave. New instruments are tuned by comparison with old “masters,” at the occasion of special ceremonies. Panpipes are used in orchestras alone and in conjunction with song. Polynesian culture - Religion. Polynesian belief systems emphasized animism, a perspective in which all things, animate and inanimate, were believed to be endowed to a greater or lesser degree with sacred supernatural power. 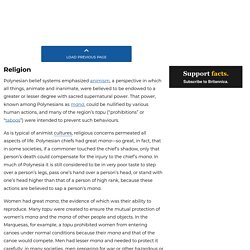 That power, known among Polynesians as mana, could be nullified by various human actions, and many of the region’s tapu (“prohibitions” or “taboos”) were intended to prevent such behaviours. As is typical of animist cultures, religious concerns permeated all aspects of life. Polynesian chiefs had great mana—so great, in fact, that in some societies, if a commoner touched the chief’s shadow, only that person’s death could compensate for the injury to the chief’s mana.

In much of Polynesia it is still considered to be in very poor taste to step over a person’s legs, pass one’s hand over a person’s head, or stand with one’s head higher than that of a person of high rank, because these actions are believed to sap a person’s mana. Robert Carl SuggsRobert C. Robert Carl SuggsRobert C. Weather in Hawaii. Weather in The Hawaiian Islands is very consistent, with only minor changes in temperature throughout the year. 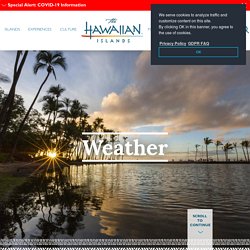 There are really only two seasons in Hawaii: summer (kau) from May to October and winter (hooilo) from November to April. The average daytime summer temperature at sea level is 85° F (29.4° C), while the average daytime winter temperature is 78° (25.6° C). Temperatures at night are approximately 10° F lower than the daytime. Temperature & Climate Zones The islands are an incredible collection of diverse micro-environments, each with its own unique weather plants and animals. Rainfall Atlas of Hawaii. How to cite this information Hawaiʻi’s rainfall pattern is spectacularly diverse (above). 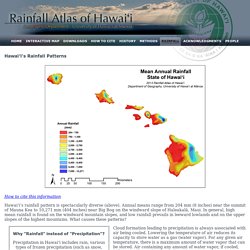 Annual means range from 204 mm (8 inches) near the summit of Mauna Kea to 10,271 mm (404 inches) near Big Bog on the windward slope of Haleakalā, Maui. In general, high mean rainfall is found on the windward mountain slopes, and low rainfall prevails in leeward lowlands and on the upper slopes of the highest mountains. What causes these patterns? Cloud formation leading to precipitation is always associated with air being cooled. Geography of Hawaii Facts & Information. Population: 1,360,301 (2010 Census estimate)Capital: HonoluluLargest Cities: Honolulu, Hilo, Kailua, Kaneohe, Waipahu, Pearl City, Waimalu, Mililani, Kahului, and KiheiLand Area: 10,931 square miles (28,311 sq km)Highest Point: Mauna Kea at 13,796 feet (4,205 m) Hawaii is one of the 50 states of the United States. 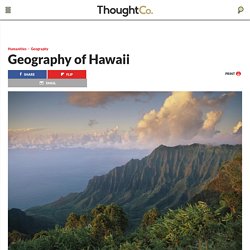 It is the newest of the states (it joined the union in 1959) and it is the only U.S. state that is an island archipelago. Hawaii is located in the Pacific Ocean to the southwest of the continental U.S., southeast of Japan and northeast of Australia. Hawaii is known for its tropical climate, unique topography, and natural environment, as well as its multicultural population.

Hawaii has been continuously inhabited since about 300 B.C.E. according to archeological records.